Thomas Heywood’s The exemplary lives and memorable acts of nine the most worthy women of the world: : Three Iewes. Three Gentiles. Three Christians 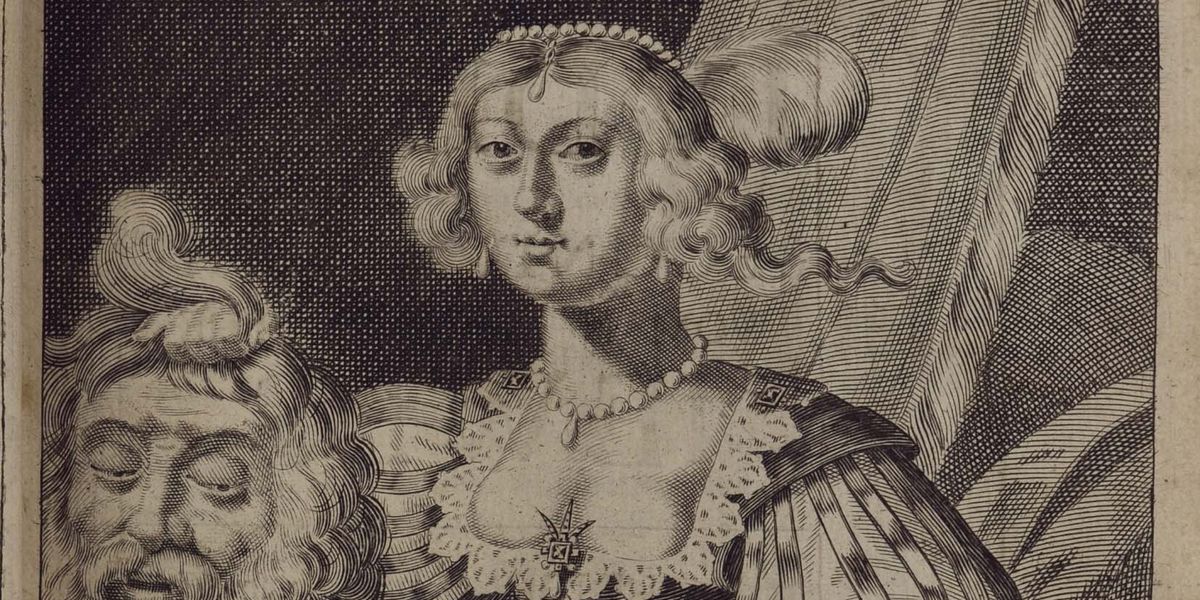 The Archives and Library of Canterbury Cathedral contain a great many treasures, a large number of which relate to the institution and its Christian heritage. There is also, however, a significant amount of material which relates to minority communities, including the Jews. A particularly nice example which brings together these multiple lineages, can be found in Thomas Heywood’s The exemplary lives and memorable acts of nine the most worthy women of the world: : Three Iewes. Three Gentiles. Three Christians (1640), where this month’s image is found.

Heywood (c. 1573-1641), typically remembered for his play texts, was also the author of a number of tracts on women in history, and in this text presents short biographical overviews of nine different women. Each one is accompanied by a short, poetic, summary and a woodcut image. These images tended to be fairly generic, and in most cases bear little relation to the accompanying text. Elizabeth I, for example, is described in the text as “fear’d […and] admir’d”, yet the image of her depicts a relatively benign figure holding a sceptre and bedecked with pearls. The same pattern holds true for most of the case studies: Heywood relates the powerful virtues of the individual figure but these are not reflected in the image; the notable exception to this, though, is the figure of Judith.

In the biblical narrative, Judith was the saviour of her people at Bethulia from an army sent by Nebuchadnezzar, king of Babylon. The army, led by Holofernes, laid siege to the village and was on the verge of victory. At this point, the [male] leaders of the village agreed a five-day truce, after which point they would surrender if no help came. Rather than allow the village to fall, Judith and her maid Abra entered the enemy camp and, having seduced Holofernes, she beheaded the Assyrian general with his own sword. Judith’s decisive action proved to be the intervention which was required to save Bethulia and halt the advance of the enemy army.

It is this event which is being depicted in the woodcut. Judith, in typically early modern garb, is shown with the head of Holofernes (still squirting blood) in her left right hand with his ornate sword in her left hand. Although peculiar within the context of this benign text, the violent image forms part of trend that emerged during the early modern period depicting various scenes from the Judith narrative. Most memorably, Michelangelo included an image of Judith and her maid carrying Holofernes’ head away in the Sistine Chapel. It is, perhaps, unsurprising that such a figure would become popularised by the Italian Renaissance given the tendency of contemporaries to represent biblical and classical narratives in tandem, a subject that was especially stimulating to contemporary audiences.

Such a visual tradition was only acceptable thanks to the biblical narrative from which these images drew. In any other context, a woman of this period simply could not be depicted in such a manner regardless of her accomplishments and victories. But by shielding images of Judith within their biblical context, it became possible (even standard) to depict her in much more explicit, powerful and even violent terms than would ordinarily have been possible for a woman.

The three Jewish women chosen for this history, Judith, Deborah and Esther, each had a particular significance that could be conveyed via a biblical narrative. It was because of their important contributions to the future of their respective peoples that they were chosen for inclusion. For a modern audience, the image might, at first sight, seem incongruous with the ways in which women were otherwise depicted in this book. By placing the image within its broader context, however, we see that the opposite is the case.