The Waterworks Drawing from the Eadwine Psalter 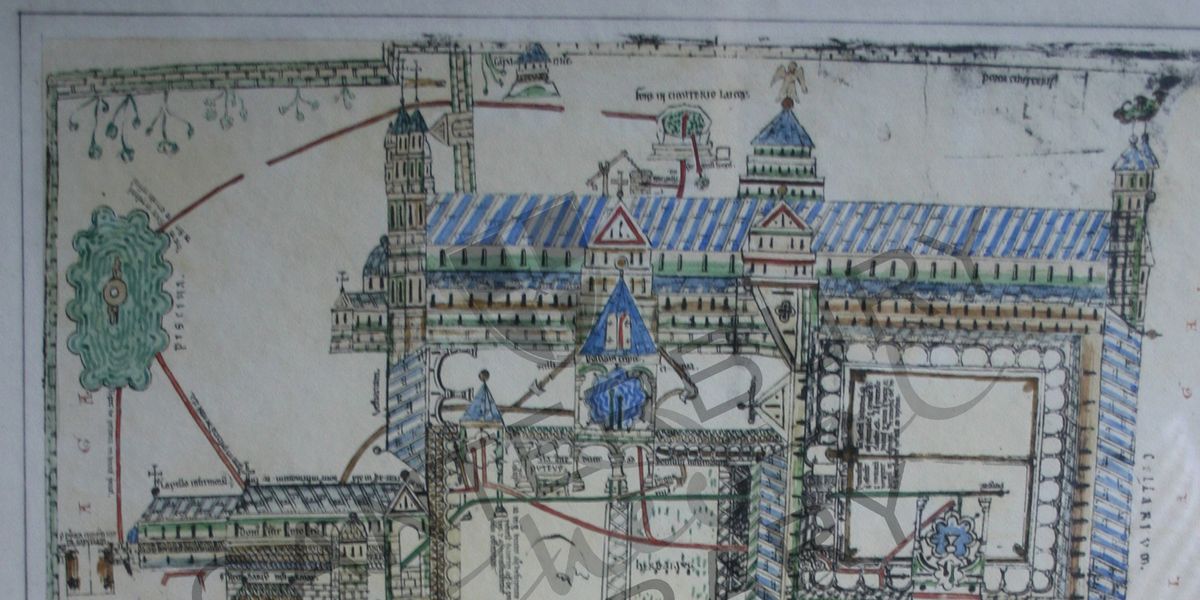 This article departs from precedent in that the image explored for this month’s ‘Picture this…’ hangs upon the walls of Canterbury Cathedral Library rather than coming from a book on one of the shelves, the library has other pictorial treasures too. The image has strong connections to the cathedral beyond being found on the library walls: the manuscript in which the original drawing is found was produced in the cathedral monastery in the mid-twelfth century, and, as Lawrence Tuck explains in the following piece, the image is vital to understanding the medieval priory at Canterbury.

Situated in the north-east corner at the back of the cathedral library, beside the doorway to the staff rooms, is a framed copy of the large waterworks drawing taken from the Eadwine Psalter (Cambridge, Trinity College MS R.17.1: the Psalter also contains a smaller, more naïve drawing of the water system). The original drawing covers a double-page of the manuscript, is drawn in ink, and washed with various colours. The plan presents a bird’s-eye view of the twelfth-century hydraulic system providing the monastic complex with water, and then disposing of it after use. It displays how the water was brought by a series of pipes and settling tanks, via fields of corn, vines and apple orchards, into the walled perimeter of the priory of Christ Church. This path, from the source to the priory, followed along the present Military Road. Once within the walls, the water was pumped to supply the numerous parts of the priory requiring it.

The Norman drawing represents how the monastic complex would have appeared sometime prior to the great fire of 1174, with the waterworks shown in relation to the cathedral and its precincts. The buildings are drawn with a relatively high degree of detail, needing to be accurate not to present an artistic, or architecturally faithful drawing, but in order to reveal where, in relation to the various precinct buildings, the pipes were located, and where they were flowing. Such a plan was, assumedly, necessary in order to allow the pipes to be located should they require repair or replacement. The direction of water flow can be determined by the colours used in the drawing, where green represents fresh water, orange-red is water which has passed through the central ‘depot’ in the cloister, strong red is the sewage washing away under the necessarium, khaki-yellow is possibly a sludge soakaway, and brown represents rainwater drainage. All the buildings are represented with the principal façade of each shown correctly oriented.

The Canterbury priory was a Benedictine community from the 10th century until dissolved by King Henry VIII in 1540. Although bathing was discouraged by the Benedictine order, except for those in the infirmary (it was regarded as an unnecessary luxury), monastic regulations instructed that a routine of washing at the beginning of each day and before meals should be enforced. The flow of water, therefore, was directed first from the conduit house and settling tanks to the infirmary, for the elderly and the sick, and from there it was channelled to the washing place in the great cloister. The water from the lavatorium was then distributed throughout the priory, for example to the kitchen, and bake house, and brew house. Rainwater was also collected, and an emergency supply of water existed, fed from an adjacent well, should the water system fail. Wastewater was used to feed the fishpond in the court, and then carried back for the flushing and disposal of waste from the necessarium (or reredorter) before being washed away to the city ditch.

The fresh water was sourced about a kilometre north of the cathedral, and, with a fall of ten metres en route, provided about 10,000 litres of fresh, filtered, and under pressure water to the precinct every hour. This source has been identified as a spring-fed pond in the Old Park at North Holmes. A surviving spring (or conduit) house lies behind Millitary Road. The credit for building the waterworks has been given, since medieval times, to Prior Wibert (1153-67). The pipes carrying the water were made of lead, as revealed by excavations, which also confirmed their positioning according to the plan. Although many buildings and features served by the early medieval waterworks no longer survive, there are remaining constructions, such as the water tower, standing in what was the infirmary cloister, which still can be visited and admired today. Once used for storing water, and for the monks to perform ablutions on their way to the quire, the water tower is used today as a space for the Cathedral Sunday Club, and can be seen just to the right as you depart from the Howley Library.