The Three Living and the Three Dead 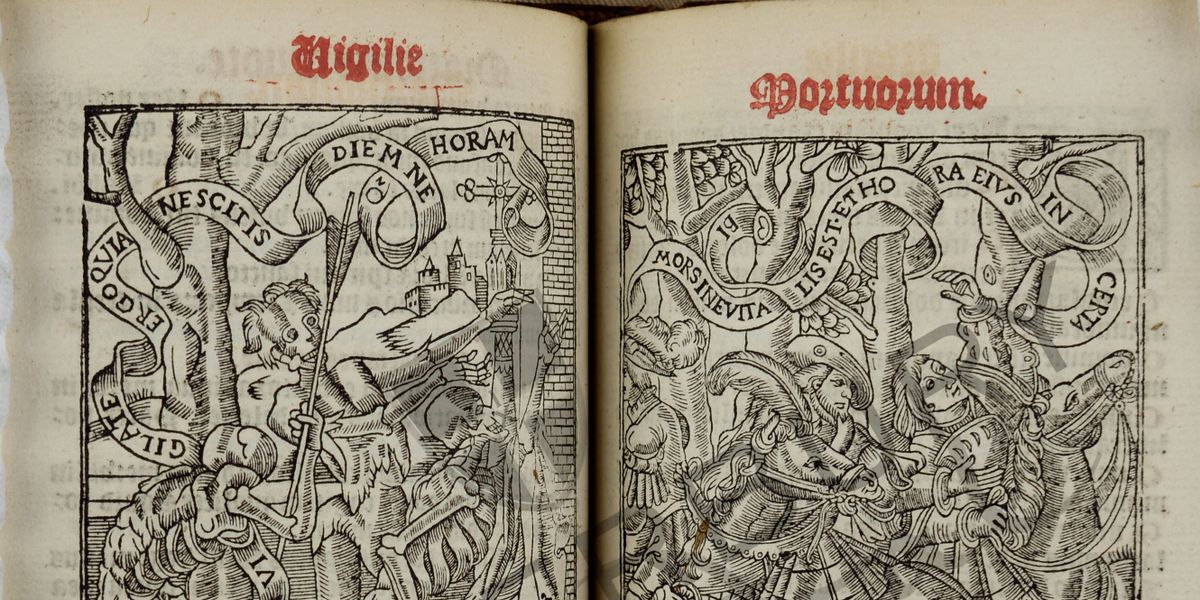 The subject matter of this double spread woodcut was a familiar macabre motif in medieval and Renaissance art known as the ‘The Three Living and the Three Dead’. The scene here, taken from a 1555 Primer printed in Rouen and intended for the English market (H/L-3-6), is constructed over two pages which are designed to be read as complementary parts of the same image.

Representations of The Three Living and the Three Dead appeared in books and church art from the thirteenth century and are illustrations of a story, whose exact origins are unknown. While there are variations between the text versions still extant, the tale is basically the same in all of them. In brief, one day three young noblemen, often shown as kings, were out hunting when they unexpectedly encountered three dead bodies. To the men’s amazement and terror, the cadavers move and speak and there is confusion about whether they are hellish demons. In fact, the three dead warn their living counterparts of the transience of life and exhort the young men to live well as death may come at any time. The Anglo-Norman text of the tale, ‘Le dit des trios morts et trios vifs,’ is accompanied by a splendid image of grinning skeletons in the De Lisle Psalter, c. 1308 – c. 1340 (British Library, MS Arundel MS 83). There also exists a fifteenth-century alliterative poem version, ‘The Three Kings’, which was possibly penned by John Audelay (Bodleian Library, MS Douce 302).

This Rouen Primer image holds the fairly common motif of having the living and the dead physically separate; the noblemen are hunting in woodland, whereas the dead are in a cemetery, as denoted by the walled enclosure and standing cross. In the numerous depictions it is quite common for the three cadavers to be in noticeably differing stages of decomposition, with the last step being a skeleton with all flesh gone. In this woodcut, the dead are all in an ‘intermediate’ stage of decay with none of them having lost all of their flesh, and the skeleton furthest right still has part of his shroud.

The connection between the two scenes is achieved in various ways. There is a swirling scroll in the top register of each image, which achieves the effect of a banner strung across the whole; the scale is uniform on either side with the trees in both scenes lending a similar verticality at the mid-way horizontal point; and the general mise en page (page layout) of red Latin title, black and white image and four lines of English verse makes an automatic association. However, the strongest link comes from the use of movement in the composition. Both images are full of motion and the action is travelling to a point of convergence in the centre. The dead all move from right to left and most of the movement from the living is also towards the centre; the first nobleman, the second man’s horse and the hunting dog all travel towards death on the other side.

The different actions of the noblemen can probably be read as indicative of characteristics. The first nobleman is oblivious to the warning scroll over his head and moves heedlessly towards danger. The third nobleman seems most aware of the jeopardy and holds his hand up towards the scroll to bring it to his companions’ notice. Furthermore, he has turned his horse in the other direction in order to leave the hunt and to enact the last line of the verse beneath him: ‘we must leve all lust and pleasaunce.’ The middle nobleman is caught somewhat between the two stances of his friends and although he turns towards his more cautious companion, his horse still points towards the hunt and his expression and hand gesture seem to convey displeasure at the interruption.

The function of The Three Living and the Three Dead is to act as an elaborate memento mori, often simply represented by a skull or hour-glass in images (e.g. Caravaggio’s paintings of St Jerome). A memento mori functioned not only as a reminder that all must die, but intrinsically it was a prompt to live well, i.e. to put away earthly pleasures which were a risk to the soul’s salvation in the afterlife. As can be seen by the red title, this double spread is located at the part of the book dedicated to vigils for the dead. (See March 2014, ‘Waking the Dead’ for an explanation of the medieval understanding of the afterlife.)

Memento mori acquired a greater significance after Black Death, at its peak in Britain 1348-1350, which reduced Europe’s population by an estimated 30-50%. Such an attrition rate obviously had both practical and psychological effects on the recovering nations. The fear of the swiftness and undiscerning nature of the plague left its mark on art. There was a rise in the number of pieces with subject matter connected to death and an intensification of the macabre element. Transi-tombs developed; these were two-tiered constructions with the effigy of the buried person on top and an effigy of the deceased’s skeleton or rotting corpse underneath. Canterbury Cathedral has an example made for Archbishop Henry Chichele (1414-1443) and located in the north ambulatory by the quire. After the Black Death renditions of The Three Living and the Three Dead became more threatening than earlier medieval versions. Scenes in books of hours and primers show skeletons no longer divided from the living, but chasing the noblemen, and sometimes noblewomen, with spears in a transmutation of the hunt scene of the original tale (e.g. Hours of Joanna I of Castile, c. 1500, British Library Add MS 35313, fol. 158v).

In this Rouen Primer, text accompanies image with Latin in the picture itself and also English verses beneath. The first verse links these skeletons to the Danse Macabre, another memento mori trope whose rise in popularity was a cultural by-product of the Black Death. In the dance, Death personified invites people of all stations to dance in the universality of life’s end and to show awareness of the fleeting nature of earthly glories and pleasures.

We have some tyme abyden (abided) our chaunce
In this worlde/ passinge tyme lustely
But now ye must come trace on our daunce
All Adams kynde be ordeyned to dye.

In the image, the Latin scrolls warn:

Therefore beware because you know neither the day nor hour
Death is inevitable. And its hour is uncertain
In truth, looking at the image, I think it is possibly too late to avert the first nobleman, but there is definitely still hope for the other two.

Jayne Wackett: Editor of ‘Picture this…’ and this month’s contributor