Animal or vegetable? The strange case of the Barnacle Goose 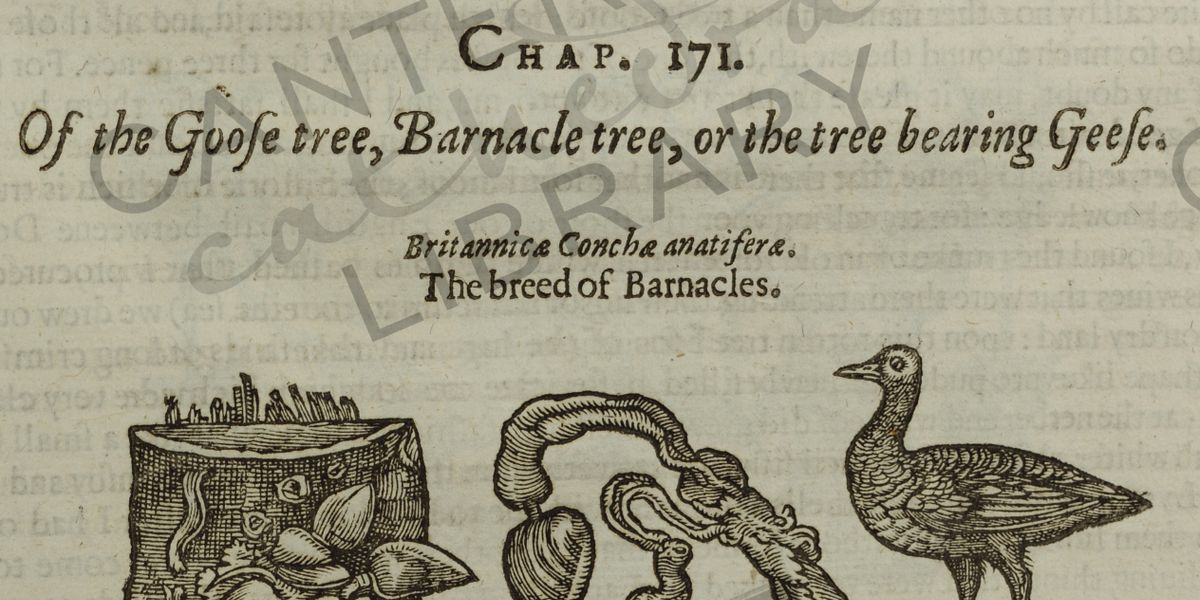 The herball or generall historie of plantes. … by John Gerarde …

London , Imprinted at London by Iohn Norton [colophon:] by Edm. Bollifant, for Bonham and Iohn Norton, 1597

Gerard’s Herbal, or Of the History of Plants (first published 1597), is abundant in detailed woodcut images of plants, their seeds, root systems and flowers. These images accompany text which discusses mainly European plants and informs the reader of the various plants’ properties and how they might be used. However, towards the back of the book, which is a weighty tome of around 1,500 pages, we find just one image with two animal types shown: barnacles and a goose. Why an image of these two creatures should be included in a herbal whose other illustrations are exclusively of plants is a superb example of science versus folklore and what appears to be a harmonious juxtaposition of the two in a book of knowledge. The Herbal was the most circulated botany book of the 17th Century and its appearance in Canterbury Cathedral Library (H/G-3-21 and W/A-6-31) provides a perfect reason for sharing a fascinating medieval and early modern tradition.

Gerard reports, in detail, the old belief that the barnacle goose (Branta leucopsis) began its life thanks to a tree rather than an egg, and while reporting a folklore does not necessarily prove belief in it, Gerard claims to have viable witnesses to the tradition’s veracity. More impressively still, he claims to have personal experience of the phenomenon and by which he ‘dare confidently avouch, and boldly put downe for veritie.’

Appearing on the two pages following the image is a discussion of three variations of this goose phenomenon, depending on geographical location in the British Isles. In the first instance he explains that,

“There are found in the North parts of Scotland and the Islands adjacent, called Orchades, certain trees whereon do grow certaine shells of a white colour tending to russet, wherein are contained living creatures: which shells in time of maturitie do open, and out of them grow those living things, which falling into the water do become fowles, which we call Barnakles…but the others that fall upon the land perish and come to nothing.”

Coming south, Gerard informs us ‘The people of Lancashire call [this bird] by no other name than a tree Goose’. He notes that the ‘spume and froth’ around driftwood from shipwrecks and other sources which found its way to the ‘Pile of Foulders’ island (Piel Island) formed into shells. In fact, the shells that he describes, and which are instantly recognisable from the woodcut, are goose barnacles (or goose neck barnacles: Lepas anatifera), which helps to understand the perpetuation of the strange case of the birth of the geese. As the picture shows, these barnacles are attached to a log by a long black tube or ‘neck’ which ends in a white shell very like the shape of a goose’s body. One of the shells in the image even shows feather like fronds (in reality feeding appendages). Therefore, due to colour and shape, the whole organism might look like a miniature barnacle goose without head. According to Gerard, when the Lancashire tree goose is perfectly formed inside the shell, it comes out by degrees, legs first forcing the shell open as it grows greater, until it hangs by its bill. Once it has fallen into the sea, ‘it gathereth feathers, and groweth to a fowle bigger than a Mallard, and lesser than a Goose, having blacke legs and bill or beake, and feathers blacke and white’.

This second variation is the closest in description to another report of Barnacle Geese from an 1185 account of The History and Topography of Ireland by medieval clergyman, Gerald of Wales. One section of his book is titled ‘Barnacles that are born of the fir-tree and their nature’.

‘on fir-logs…they hang by their beaks from what seems like sea-weed clinging to the log, while their bodies, to allow for their more unimpeded development, are enclosed in shells…having put on a stout covering of feather, they either slip into the water, or take themselves in flight’.

Just as in Gerard’s Herbal, Gerald of Wales stresses the importance of the tree as overall generator of the barnacles and the ensuing geese: ‘They take their food and nourishment from the juice of wood and water during their mysterious and remarkable generation.’

The third variation on this goose theme brings us right into Kent itself. On the coast between ‘Dover and Rumney’ Gerard found the trunk of an old rotten tree covered in limpits (Patella pellucida), which he took back to London and examined. Although some contained ‘living things without forme or shape’ others, in Gerard’s words contained ‘the Birds covered with soft downe, the shell half open, and the Bird ready to fall out’. It is difficult to know exactly what Gerard was examining, and how far his judgement was clouded by wanting to see what he felt he knew to be true. He even explains the shapeless living things in some of the shells as being undeveloped and less ripe. However, Gerard is not alone in having been deceived by his own eyes. Gerald of Wales stated that ‘I myself have seen many times and with my own eyes more than a thousand of these small bird-like creatures hanging from a single log upon the sea-shore.’

Subconscious suggestion of a pre-existing explanation would account for these men interpreting what they saw as evidence, but there is another interesting reason why Barnacle Geese were popularly considered as not truly birds. In The History and Topography of Ireland, Gerald of Wales explains how in Ireland, certain bishops and religious men would eat the flesh of the Barnacle Goose on a Friday and fast periods, when normally meat was forbidden. The reasoning, not simply contained to Ireland, was that as Barnacle Geese were in fact created from wood and water, rather than born of flesh, they were not themselves akin to flesh and could therefore be eaten with impunity.

Yet, the eating of Barnacle Goose on fast days was not universally accepted as legitimate. Albertus Magnus, tutor of Thomas Aquinas and contemporary of Gerald of Wales was sceptical of the Barnacle Goose legend  and Holy Roman Emperor, Frederick II (regnal dates 1220-1250) examined the Goose Barnacles and found no likeness to a bird in them. At the Fourth Lateran Council in 1215, Pope Innocent III forbade eating these geese during Lent, but without dispelling the legend of their generation. He reasoned that despite the unusual reproduction of Barnacle Geese, they resembled ducks physically and in manner, and thus their meat should similarly not be eaten on fast days. Perhaps this is the earliest application of the Duck Test theory: if it looks like a duck, swims like a duck and quacks like a duck, it might be a Barnacle Goose.

By Jayne Wackett (editor of Picture this…)

Gerald of Wales, The History and Topography of Ireland (Penguin:1982)