The Seal and the Gate 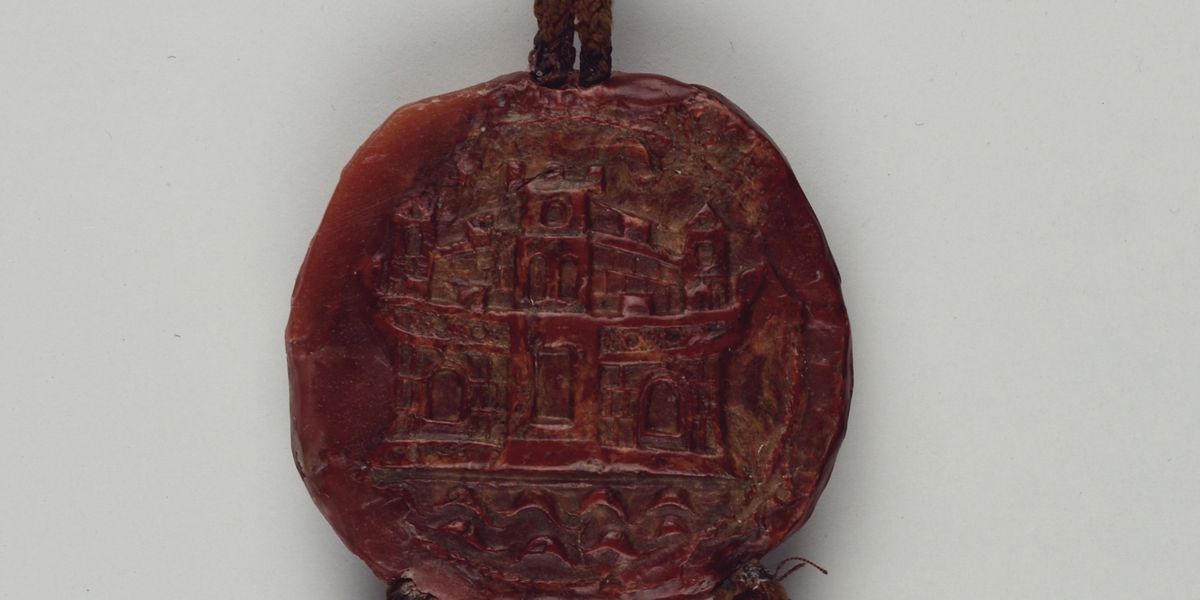 Mary Berg tells us about her exciting discovery of a civic seal with a unique scene.

A picture may speak a thousand words and a seal can reveal a lot about the context of those words. The pictured seal, attached to CCA-CC-A/A/6 in the archive of the City of Canterbury, was found when carrying out a simple catalogue check of the Canterbury city charters. The seal is double sided, and both sides are of great interest.

The charter to which the seal is attached, dated 28 September 1261, is not a royal charter, unlike most in the city collection, but a letter to all citizens from the aldermen, bailiffs and jurats, all named, revoking taxes on bread sold from baskets and windows with a view to reducing poverty in the city. The lead name is not that of a city bailiff, but Hamo Doge, alderman of Westgate. Doge was prominent in many aspects of Canterbury life, including at the cathedral; he was an official of the Archdeacon of Canterbury. The charter itself was well documented by the twentieth-century archivist William Urry, but the seal has never been discussed.

The seal was thought to show ‘a city surrounded by a moat’, but is now thought to show the only known depiction of the Norman Westgate with the chapel of the Holy Cross. The river Stour flows in the foreground, while the walls of the city are traced around the upper edge. The seal’s legend has unfortunately been lost to damage.

The counter-seal is almost certainly Hamo Doge’s personal seal as he was the first-named on the charter. It is rounded and the oval in the centre is approximately 3 x 2 cm. The legend is incomplete, but seems to be a general form often used on private seals expressing friendship and is not immediately identified as used by an archdeacon’s official.

The Westgate was the most important, and probably the largest, of Canterbury’s city gates, and was the centre of the  city’s governance in the 13th century prior to the building of the Guildhall in the early 14th century. There are 13th century charters in other collections of a similar style and quality which state that they were written at the Westgate, but no location is given for A/A/6.

Henry II walked through the gate on his way to do penance at Thomas Becket’s tomb in the cathedral on 12 July 1174, and the Black Prince’s great funeral procession passed through two centuries later on 29 September 1376. This was to be one of last, and possibly the grandest, public occasions to pass under the gate before its demolition at the end of the 1370s, when it made way for the new Westgate, which was constructed to strengthen the city’s defences in 1380.

The charter states that it is ‘sealed with our common seal’ as evidence that all the leading citizens of Canterbury agreed to the sentiment of the letter. There are no similar borough charters in the city collection, nor has any other example of the seal been found (so far).

The revocation of a bread tax, which was probably a local tax, while no doubt of great importance at the time, does not seem to merit such a survival. Perhaps the charter was kept because it named the chief citizens of Canterbury at the time?