The life-cycle of a medieval music fragment 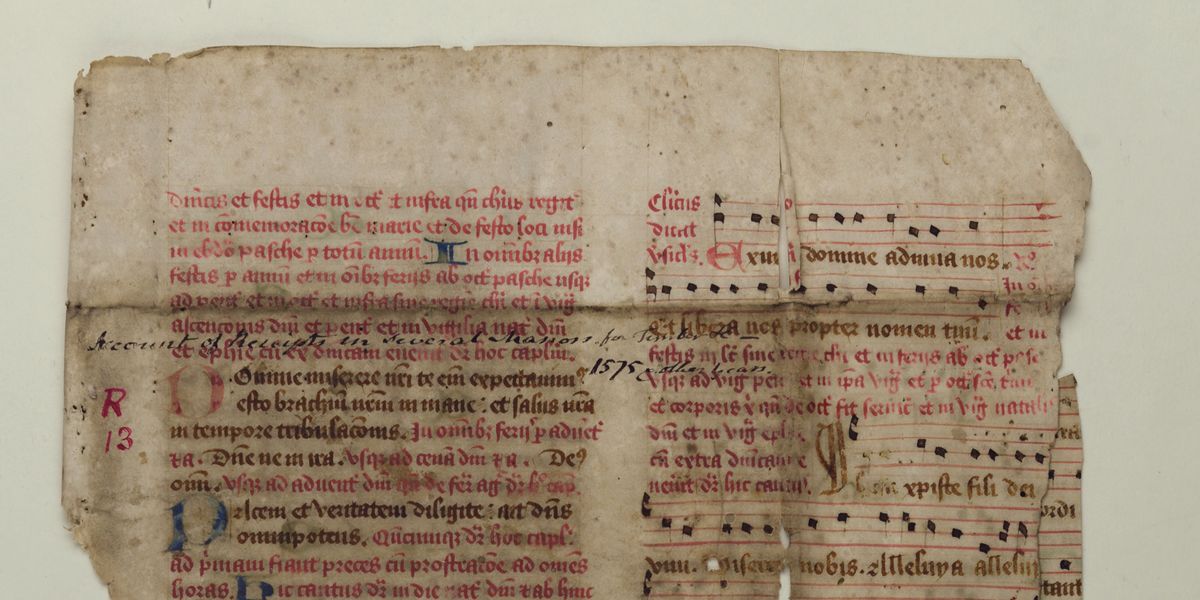 Canterbury Cathedral Archives holds a fascinating collection of medieval music fragments that help to reveal the life-cycles of manuscripts and cultures of recycling in the past. A fine example from this collection is a late fifteenth-century music fragment of English origin (CCA- AddMs/128/73) set to plainchant with musical notation. This particular fragment has only recently been rediscovered in the Cathedral’s collections and was identified during a conservation project in 2018.

The fragment previously served as a protective wrapper for a set of estate accounts dated 1575, having been recycled for this purpose at the time. In this image, creases are visible on the page that demonstrate how the manuscript wrapped around the covers of the account book and the title of the accounts is written towards the top of the folio in a later sixteenth-century hand, ‘Account of Receipts in several Manors for Timber etc, 1575 & other years’.

The fragment was originally part of a missal, a medieval liturgical book containing instructions and texts necessary for the celebration of Mass throughout the year. The surviving liturgy and music relates to the Easter cycle and its contents are likely to reflect the musical traditions of the fifteenth-century Christ Church Priory in Canterbury, where the book was probably housed before the Reformation. Two styles of church music were used side-by-side in England during this period: plainchant and polyphony. Music was sung daily in services at the priory throughout the Middle Ages, and there was expertise in both styles.

Plainsong, or plainchant, is the older of the two styles and uses a single melodic line. Polyphony, on the other hand, is a more complex form of music made up of two or more simultaneous lines of independent melody. It was popular throughout the later medieval period, but started to decline in popularity following the Reformation, especially in Protestant congregations that performed together with the choir and required simpler pieces of music.

For the musician, the muted colours and silent notation of the fragment reveal an exciting depth of information. The fragment provides various avenues for study, including understanding musical traditions and book production methods in England, and it gives us a chance to study the evolution of music and its notation. Unlike modern music, medieval musical notation was intended more to act as a memory aid to remind or prompt singers who already knew the melody by heart. Modern notation is more detailed and is used to indicate distinct pitches, tempo, dynamics, and so on; in the Middle Ages, these indicators were not as widely used.

Red, blue, black, and brown inks used to compose the manuscript hint at the colorful nature of the original complete missal. The red ink, known as rubrics from the Latin word rubrum (‘red’), shows the instructions to the priest and was also used for the stave, while black and brown ink is used for the text of the liturgy. Blue and red ink are alternately used for the first letters of each passage.

The fragment is one of many medieval music items in the collections of the Cathedral Archives recycled as the bindings of later manuscripts and books. This work is one of the very few where practically the whole page is visible. A large number of fragments in the collection survive in much smaller pieces as they were readily sliced-up and recycled for binding material once they were no longer considered useful.

Additionally, this music fragment is an example of a bifolium – a pair of folded leaves making up four individual pages – the whole piece was required as wrapping material. The recycling of old, damaged or simply discarded manuscripts was common in an age where writing and bookbinding materials were costly and sometimes hard to source. Here one leaf of the bifolium wrapped the front cover of the book and the other wrapped the back; what we today view as an exciting manuscript survival was simply a means of protecting a pair of book covers in the sixteenth century. Post-Reformation, the missal and other music manuscripts in the Cathedral’s collections would have been viewed as Catholic works, which led to their destruction and recycling.

Having a distinct collection of manuscripts found in the bindings of later books allows us to consider how these now precious texts were understood by previous generations and how lucky we are that they were recycled rather than lost or destroyed as countless others were.

Roger Bowers, ‘The Liturgy of the Cathedral and its Music, c.1075-1642’ in A History of Canterbury Cathedral, ed. by Patrick Collinson, Nigel Ramsay, and Margaret Sparks (Oxford: Oxford University Press, 1995), p.408-450