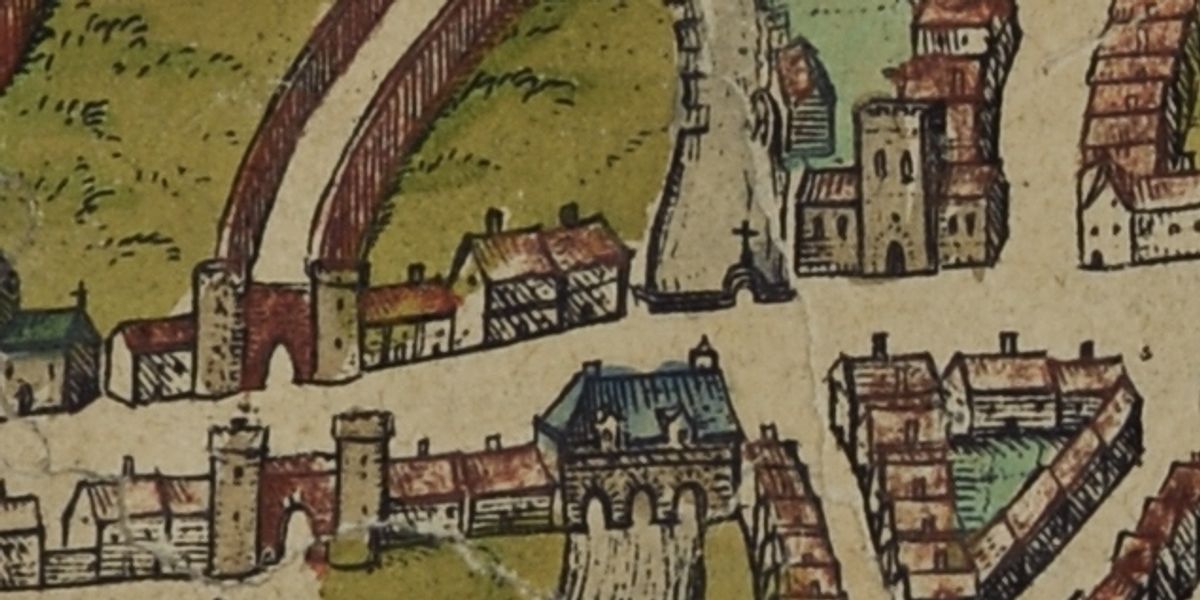 This year, we are marking 30 years since the creation of the UNESCO Canterbury World Heritage Site. In this month’s ‘Picture This…’ we are featuring a snapshot into the past with a colourful map of Canterbury. This sixteenth-century map shows an incredibly detailed bird’s-eye view of the city, including windows, doors and even garden divisions. It especially highlights the large number of parish churches that dotted the centre of the city, serving a population of around 5000 people. Around the edge of the map are the shields of arms of the city of Canterbury and Christ Church Cathedral (both top right, the Cathedral’s shield incorrectly coloured red rather than blue), the Archbishop of Canterbury (bottom right), and the incumbent monarch, Queen Elizabeth I (top left).

The map was first published in about 1588, in the fourth volume of Civitates orbis terrarum (‘The Cities of the World’), itself the second oldest printed atlas in the world. Civitates orbis terrarum was edited by a German cleric called Georg Braun (1541-1622) and a Flemish engraver, Frans Hogenberg (1535-1590). Published in six volumes between 1572 and 1617, it contains an extraordinary 546 images of cities, not just in Europe, but across Asia, Africa and Mexico.

Many of the pictures within the atlas, including this map of Canterbury, were engravings of original drawings by Georg Hoefnagel (1542-1601), who, like Frans Hogenberg, was a native of Antwerp, Belgium. Hoefnagel visited England in 1568, spending a number of months in London, and it may well have been during this time that he created the map of Canterbury. If so, this is how Canterbury would have looked shortly after the birth of one of its most famous residents: the playwright Christopher Marlowe (b.1564).

The date would also make it the earliest known map of the city of Canterbury. An almost contemporary map dated 10 October 1588 (now British Library, Sloane MS 2596, f. 15), drawn by Englishman William Smith, an officer of the College of Arms, bears a striking resemblance to Hoefnagel’s map. However, Smith is not thought to have visited Canterbury, and it seems likely that he was working from a copy of Hoefnagel’s work.

Whilst it is not possible to give an exact date to Hoefnagel’s map as it may have been reproduced after his departure from England from memory or sketches, that it is representative of Canterbury in the latter half of the 1560s is indicated by the clothing of the figures at the bottom right of the map. The ruffs in particular suggest a date before the 1570s and 80s, when fashion dictated a dramatic increase in the size of ruffs. Most of the engravings in Civitates orbis terrarum contain similar images of figures in local costumes. The reason for this is not to add further interest or authenticity to the maps, but, according to Braun in the introduction to the first volume, the costumed men and women were added were to prevent the maps being used by the Turks to gain military advantage, as he believed their religion prohibited them from looking at such images.

The map contains a host of other interesting details. Although St Augustine’s Abbey and the three friaries (Greyfriars, Whitefriars and Blackfriars) had been closed during Henry VIII’s Dissolution almost fifty years prior to the map’s publication, St Augustine’s Abbey grounds (parts of which are now included in the Canterbury Christ Church University campus) are clearly evident in the top right of the map. Indeed, by this time the Abbey had been converted into a royal residence, originally intended for use by Anne of Cleves, and was being leased to Henry, Baron Cobham, Lord Warden of the Cinque Ports.

Equally, whilst the castle and Cathedral are the only buildings labelled, it is possible to pick out a number of sites which are still standing in Canterbury. Although only a small portion of the city walls remain today, on the map we can see how impressive it would have been, fully encircling the city, with no fewer than seven gates providing entry and exit. Of these gates only Westgate Towers, on the left of the map, still stands. Further down the high street, towards the centre, the Hospital of St. Thomas the Martyr (also known as the Eastbridge Hospital), can be seen straddling a branch of the River Stour just as it does today. To the left beneath the Cathedral, the market place is labelled. Now known as the Buttermarket, at the time the map was drawn this was referred to as the Bull Stake, as it was here that bulls were tied up and baited overnight before being slaughtered in Butchery Lane.

The text on the far right of the map describes Canterbury both as the seat of the Archbishop, and as a ‘fertile city’ (urbs fertilis). The map clearly shows the expanse of green spaces within the city walls themselves, and surrounding it on all sides. At a first glance the map is dominated by the colour green and even after careful examination of buildings and streets, the eye is still drawn back to those verdant fields and gardens. Canterbury today still contains many of these green spaces; although it is the historical aspects of the city, rather than the natural, which have led to its status as home of a UNESCO World Heritage Site, inside the cathedral walls there remain gardens where both time and nature seem to stand still.