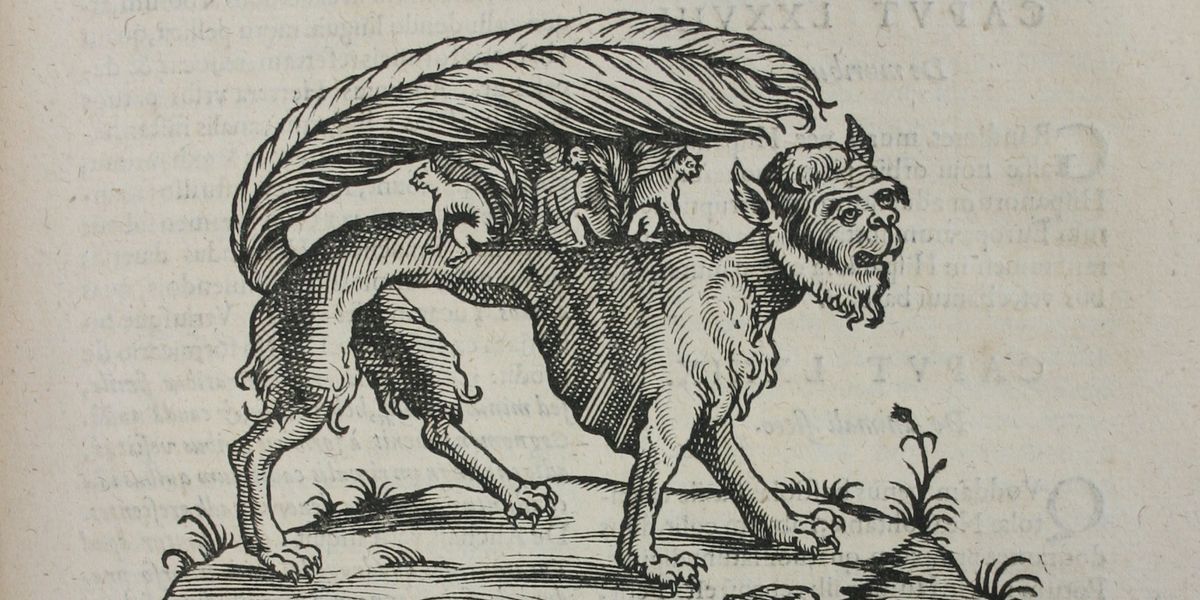 After a long, hot summer holiday, some parents may be only too delighted to be carrying their darling offspring back to school. In this image of the Su or Succarath from Historia naturae : maxime peregrinae (printed 1635) by Juan Eusebio Nieremberg (1595-1658), we see a species unknown to modern zoologists, possibly even a mythical creature, transporting its young on its back, shielded by a magnificent tail. The Succarath’s furrowed brow and prominent rib cage suggest that this parenting lark may not be entirely stress-free!

The Succarath appears as entry 74 in Book 9. The book concerns the natural history of the New World, which incorporates 16 distinct books in one volume, and was published in Antwerp by Flemish printer Balthasar Moretus (1574-1641). The volume includes fascinating entries on natural flora and fauna, metals, rocks, minerals and the astronomy of the Indies. There are 69 beautiful woodcut illustrations by Christoffel Jegher (1596-1652), accompanied by details of the strange and wonderful creatures new to European voyagers and by suggested medicinal uses of herbs and plants.

Below the engaging illustration of the Succarath, a Latin passage suggests that it can be found next to rivers in Patagonia and is regarded as ‘torva’, savage or fierce. The hair on the top of its head and its short beard resemble a lion’s mane encircling a rather human face. A luxuriant squirrel-like tail protects its young who perch on its back. The Succarath’s warm pelt, necessary for the cold climate in southern South America, made it the target of native hunters who trapped the beast by digging holes and covering them with twigs and branches.

The Succarath is described as both a fierce and devoted parent. When trapped, the creature, out of rage or a desire to spare its young from the hunters, will kill them. In less threatening times, it is said to carry its young to the meadows and there adorn them with fragrant blooms. In turn, the young would then care for their parents, carrying and nourishing them in their dotage. This family-minded creature is thus compared to that paragon of parenting, the stork (‘reciconiare’).

Europeans were keen to highlight similarities and differences between these new creatures and animals more often encountered in the European experience. By describing the Succarath as having features common with a lion, a man, a squirrel and a stork, the author brings the Succarath into the realm of the familiar and invokes particular qualities and characteristics. The resemblance to a lion perhaps suggests a certain nobility, a creature proud and courageous.

The author, Juan Nieremberg, a Jesuit lecturer born in Madrid but of German parentage, likely drew on a number of reports and sketches from travellers to the New World to compile his Historia naturae. Much of it may be based on the work of Francisco Hernandez (1514-1587), who was sent to Mexico in the 1570s by Phillip II of Spain (1527-1598). The Succarath in particular appears in other books of the period and there is a similar illustration by Andre Thevet (1516-1590), a French Franciscan priest and cosmographer, in his work on Brazil published in 1558. Nieremberg describes how the Succarath is hunted by ‘gigantes’, referring to the native people of Patagonia who had previously been described as giants by the Venetian explorer, Antonio Pigafetta (c.1491-c.1531), in 1520.

Indeed, the apparently scientific and rigorous process of cataloguing the natural world in such a hefty volume perhaps belies the potential for inconsistency in its sources, likely to be a swirling melee of reports from missionaries, sailors, explorers and native peoples shared since Christopher Columbus’s expeditions of the 1490s. While it may be difficult for the reader to verify some of the details, it is certainly comprehensive. The fantastic copy of Nieremberg’s Historia Naturae we now have in Canterbury Cathedral Archives and Library is one of many widely distributed throughout Europe; unsurprisingly the first encyclopedic text on the flora and fauna of the New World was a bestseller!

What fun now to consider which Patagonian mammal the Succarath, could possibly be. Theories abound, including the opossum, river otter or puma. None of these fit the bill perfectly. Maybe the Succarath was merely the subject of tales repeated amongst those who had voyaged across the Atlantic Ocean, as real as a mermaid or a unicorn. Perhaps the real Succarath was hunted to extinction many years ago for its warm pelt? Real or not, as a delightful image of a harassed parent, many of us may well empathise with this mysterious creature!

A cultural history of animals in the Enlightenment, ed. By M Senior (Oxford: Berg, 2009)