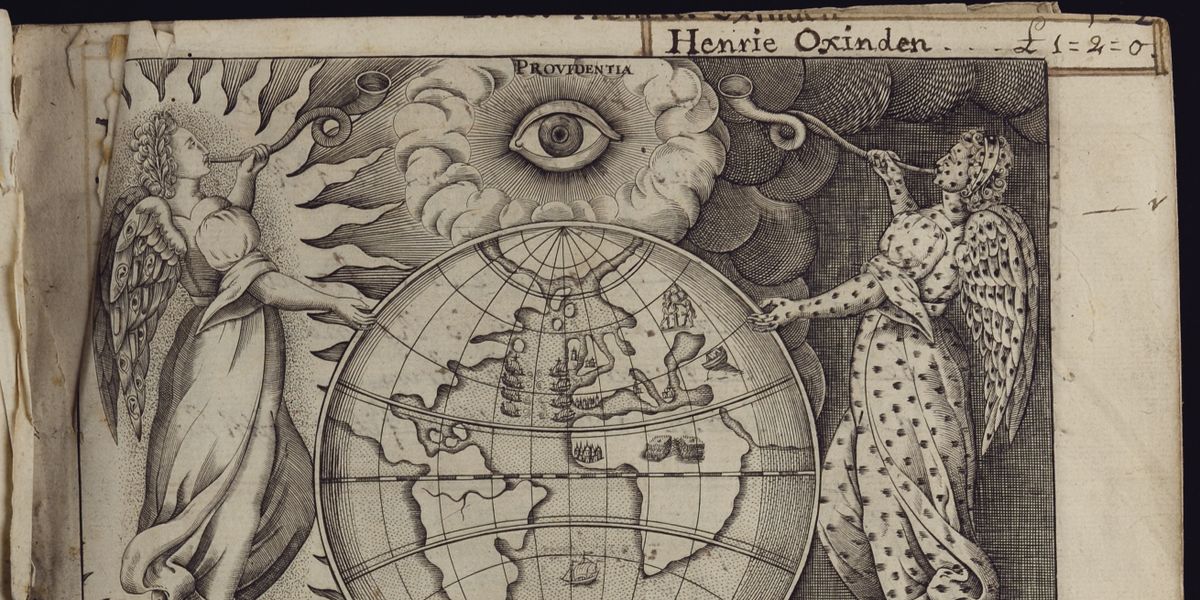 This month’s image is the frontispiece from Sir Walter Raleigh’s ambitiously titled The history of the world. : In fiue bookes (1621). (shelfmark Elham 70). Raleigh was imprisoned in the Tower of London on charges of treason from 1603-16, and it was during this time that he composed his history. The work was intended as an instructional history, offering moral examples from creation to the present day aimed principally at Raleigh’s supporter, Prince Henry, the eldest son of James I. However, the prince’s death in 1612 meant Raleigh finished his history abruptly with an account of the Fourth Macedonian War. The rest of his history remained unwritten.

Nevertheless, thanks to the support Prince Henry had shown Raleigh prior to his death the book was published in 1614. After publication, however, many readers adjudged the text to be too critical of kingship (indeed, it is said that Oliver Cromwell admired Raleigh’s work) and the history was banned the same year by James I, who considered it ‘too saucy in the censuring of princes’.

In spite of its controversial legacy, Raleigh’s text provides fascinating insights into how history was conceptualised by early modern elites and intellectuals. This is particularly evident in the book’s elaborate frontispiece, which presents an engraving by Renold Elstrake, a largely forgotten early English engraver. The image’s primary inspiration comes from a passage in Cicero’s De Oratore which was well known in Renaissance Europe:

‘Historia vero testis temporum, lux veritatis, vita memoriae, magistra vitae, nuntia vetustatis, qua voce alia nisi oratoris immortalitati commendatur?’ (‘History is indeed the witness of time, the light of truth, the life of memory, the teacher of life, the messenger of antiquity: by what other voice, than that of the orator, can it be passed into immortality?’)

This passage signals to the audience Raleigh’s ambitions for the book: as a means to utilise the past to provide a moral education for the present. By using this passage to greet readers, Raleigh was also consciously placing himself in the company of esteemed Classical orators like Cicero, whose reputation had grown markedly during the in the preceding century.

The engraving depicts the figure of magistra vitae (the teacher of life) holding aloft a map of the world, crushing the skeletal figure of death and oblivion under her feet. She is flanked either side by a Venus-like figure of Truth, and the withered crone Experience. Between them are four columns, which correspond to the passage from Cicero: testis temporum (the witness of time) a column carved with books; nuntia vetustatis (the messenger of antiquity) carved with hieroglyphs; lux veritatis (the light of truth) covered with rays of light; and vita memoriae (the life of memory) entwined in twisting vines.

At the top of the frontispiece the all-seeing eye of providence stares out at the reader. It oversees the map of the world, held up by magistra vitae, in which there are several icons depicting major sites of the biblical or antique past, and modern ships crossing the Atlantic (both subjects close to Raleigh’s heart). Two of these, Noah’s Ark atop Mount Ararat, and Adam, Eve and the serpent in the Garden of Eden, are particularly noteworthy. The tiny figures of Adam and Eve are wearing fig leaves which are later described by Raleigh ‘as broad as amazonian targets’, a description that was later recycled by John Milton in Paradise Lost.

On either side of the globe fama bona and fama mala (good and evil fame) are depicted as angels blowing trumpets. The figure of fama mala is covered from head to toe in dots of ink, is a visible reminder to the contemporary audience of Raleigh’s stained reputation. When the book was published, his stints in the Tower of London (1592, 1603-16) had no doubt tainted the admiration and good fortune he received for his discoveries in the Americas; and his execution for treason later in 1618 underscored just how fickle fama bona could be. Whilst the rota fortunae, the wheel of fortune, does not appear on the frontispiece, it is the same idea expressed, as the rise and fall of fame was a common theme in medieval and renaissance literature and here appears in reference to both to antique and contemporary events.

As a whole, Raleigh’s frontispiece allows the viewer, modern or early modern, to reflect on the interplay between fate, fortune, providence and the lessons which can be learnt from a study of the past.

Nicholas Popper, Walter Raleigh’s ‘History of the World’ and the Historical Culture of the Late Renaissance (University of Chicago Press: Chicago, 2012)