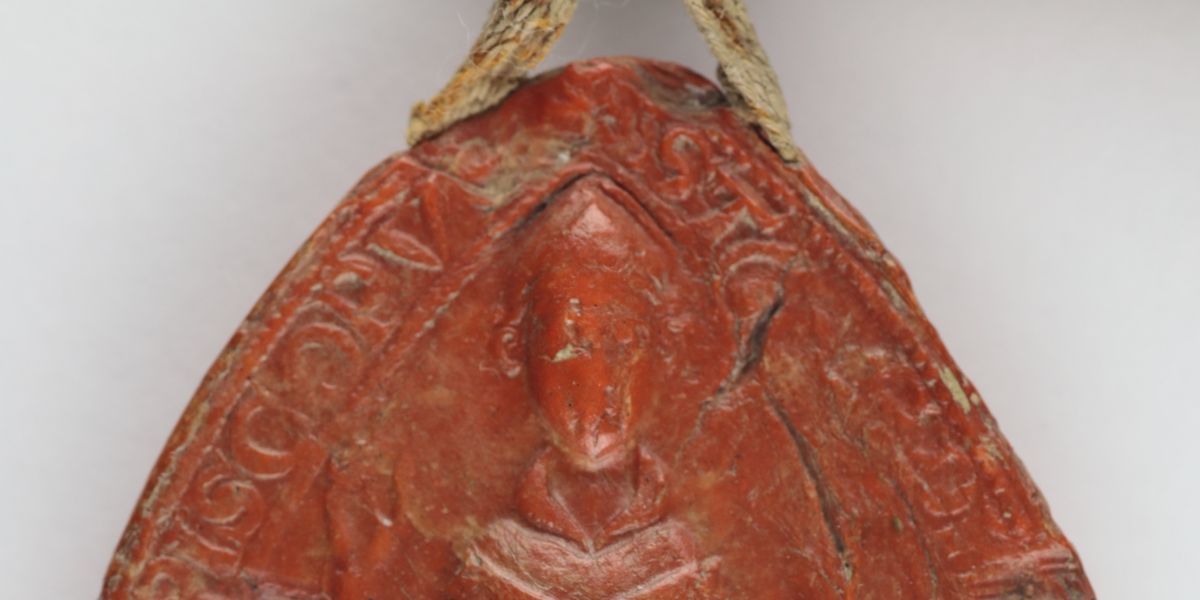 The year 2020 marks 800 years since the translation of St Thomas Becket: the move of his remains from his tomb in the crypt to a glittering new shrine in the Trinity Chapel on 7th July 1220. It will also be 850 years since his martyrdom in the Cathedral on 29th December 1170. Thus, ‘Picture This…’ for 2020 will focus on Becket, drawing on items in the Cathedral Archives and Library and also in other Canterbury collections. We are also inviting a number of guest contributors for this special year. The first of these is Professor Anne Duggan, who has chosen to write about a depiction of Becket’s martyrdom in a medieval seal. We are starting the feature in December 2019, given that the month of December was the month in which Becket was born (21st December), returned from exile (1st and 2nd December) and was murdered (29th December).

Author: Professor Anne Duggan. She is Emeritus Professor of Medieval History at King’s College London, and a highly regarded world expert on Thomas Becket, having edited and translated his ‘Correspondence’ for Oxford Medieval Texts and written an acclaimed biography and numerous other studies. Her interests and expertise also include church, intellectual and legal history.

Amongst the treasures in the Canterbury Cathedral Archives is this seal of Archbishop Stephen Langton (died 1228), a famous English-born theologian who had taught in Paris before his nomination as Archbishop of Canterbury by Pope Innocent III and his election in 1207. Langton was one of the framers of Magna Carta (1215 and 1225), composed the hymn ‘Veni sancte Spiritus’ (‘Come Holy Ghost’), and, on 7th July 1220, presided over the translation of the relics of St Thomas Becket to the splendid new shrine in the Trinity Chapel. The 800th anniversary of this translation will be celebrated here in July 2020.

The seal is attached to a fairly run-of-the mill confirmation of an agreement between the Canterbury monks and the rector of Eynsford concerning Farningham chapel and the rights and tithes deriving from it, issued in November 1225. Its obverse bears the traditional image of a mitred and robed archbishop, wearing the pallium, right hand raised in blessing, left hand holding an episcopal crosier, and his name and title inscribed in Latin around the edge, translating to ‘+ Stephen Langton, by God’s grace Archbishop of Canterbury’. The reverse (counterseal), however, is an extraordinarily powerful and detailed depiction of the murder of St Thomas in Canterbury Cathedral on 29th December 1170. It is also a personal expression of Archbishop Stephen’s dedication to the memory of his martyred predecessor, whose translation was a major national and international event.

Contemporary accounts of Becket’s murder describe how three of the conspirators (Reginald FitzUrse, William de Tracy and Richard Brito) cut Becket down with vicious sword strokes to the head, one of which also injured the arm of the priest (Edward Grim) who tried to protect Thomas, while the fourth conspirator (Hugh de Morvill) stood guard to prevent any attempt at rescue; then, as the four withdrew into the cloister, Hugh of Horsey (Mauclerc), a clerk in Hugh de Morvill’s service, completed the sacrilege by scraping Becket’s bloodied brains out onto the ground.

The depiction of this savage murder on a small oval of red wax, measuring only 5.7 centimetres by 3.7 centimetres, is a masterpiece of dramatic design. No doubt drawing on Canterbury tradition, the designers of Langton’s counterseal constructed a complex composition showing four fully-armed knights attacking the archbishop. One (de Tracy) strikes Grim’s arm and another (FitzUrse) strikes Becket’s head with what appears to be a broken sword, while three objects fall to the ground. The first is ‘Becket’s crown’, the tonsured part of the Archbishop’s head, partly sliced off by FitzUrse and then severed by Brito, who smashed his sword on the stone floor when he delivered a final devastating blow to the top of Becket’s skull, as Thomas lay dying on the ground. The second is Becket’s cap, either flicked off by FitzUrse in a first insulting gesture or dislodged as he opened the attack; finally, there is the point of Brito’s broken sword.

‘Becket’s crown’ and the ‘sword’s point’ were both preserved at Canterbury, each with its own altar: the skull fragment in the bust reliquary in the Corona Chapel, and the ‘sword’s point’ at the site of the murder in the north-west transept; and both were memorialised in pilgrim badges. One further detail, not recorded in the written sources, but seen in numerous martyrdom scenes and probably derived from oral tradition, is Becket’s processional cross, held by Grim, here surmounted by the dove of the Holy Spirit, which adds an extra dimension to the sacred character of the scene.

The immediate consequence of the murder in the Cathedral was one of the swiftest canonisations in Christian history and the establishment of Canterbury Cathedral as one of the most popular pilgrimage venues of the Middle Ages. Chaucer’s ‘Canterbury Tales’ and the thousands of pilgrim badges, examples of which can be seen in Canterbury’s Beaney House of Art and Knowledge, are evidence of its popularity. Outside England, St Thomas of Canterbury was celebrated in churches and monasteries from Trondheim (Norway) to Monreale (Sicily) and from Tomar (Portugal) to Sulejów (Poland); and the province of Trondheim, which included Iceland and Greenland, celebrated the feast with a version of the Office composed by the Canterbury monk Benedict (later Abbot of Peterborough) in 1173. For Stephen Langton himself, the image of the martyrdom on his counterseal remained a constant inspiration, expressed in the motto incised in Latin around its rim, translated as ‘May the death portrayed outside be for thee a life of love within’.