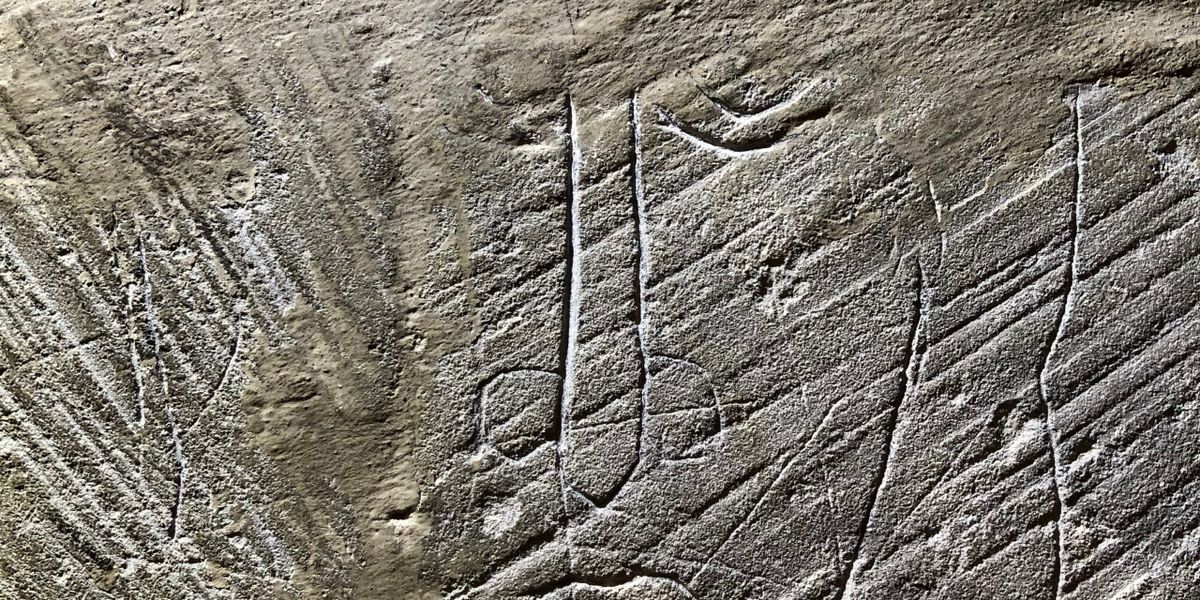 The monthly ‘Picture This…’ articles highlight items from the collections of Canterbury Cathedral and related collections, and are written by postgraduate students from the University of Kent and Canterbury Christ Church University, staff from the three institutions and guest contributors. Given the anniversary commemorations, throughout 2020 and into 2021, ‘Picture This…’ focusses on St Thomas Becket.

Between 2018 and 2019 a group of trained volunteers, led by the Collections Manager, Sarah Turner, and Collections Management Intern, Philippa Mesiano, systematically recorded and photographed a large portion of the graffiti in the Eastern Crypt of Canterbury Cathedral. This project formed part of the Learning and Participation work of The Canterbury Journey, the Cathedral’s multimillion-pound project partly funded by the National Lottery Heritage Fund. During this survey, they began interpreting some of the graffiti in the crypt.

Today, graffiti is generally viewed as vandalism, particularly in the context of church and cathedral spaces, but in the Middle Ages the act of carving marks into the walls and surfaces of these religious buildings was normal.

There are many different types of medieval graffiti in Canterbury Cathedral, including masons’ marks, compass-drawn designs, crosses, Christograms, and text inscriptions. Amongst these are a number of large figurative designs, ranging from crowned figures to biblical feasting scenes, which make up a significant portion of all the graffiti at the Cathedral.

The Cathedral’s rebuilding programme, which commenced following a fire in 1174 that destroyed much of the East end of the Cathedral, also provides a likely starting point for the execution of much of this graffiti, with the majority of the building work in the Eastern Crypt taking place between 1180-1.

The earliest known reference to the graffiti in Canterbury Cathedral dates back to the first general meeting of the British Archaeological Association held in Canterbury in 1844, when George Godwin spoke on the masons’ marks he had found in the crypt, eastern transept, and nave of the Cathedral. Later, in the 1960s, two pupils at the King’s School, the Horsfall-Turner brothers, completed surveys of the masons’ marks and medieval graffiti in the Cathedral under the supervision of the Archivist, William Urry. Their extensive and detailed notebooks are held in Canterbury Cathedral Archives.

Jonathan, one of the Horsfall-Turner brothers, later commented on the large number of medieval figurative scenes in the Cathedral, suggesting that they could have been created by either the masons who built the space or the monks who resided there. It has also been proposed that these scenes could have been setting-out designs for wall paintings. This seems doubtful as incision marks for wall paintings were often incomplete, marking out particular sections rather than a whole design. It is possible that these figurative scenes were created by an artist or craftsperson – someone with the right skills and tools –  as opposed to some of the smaller, clumsier graffiti marks which were carved by ordinary people visiting the Cathedral.

Much of this graffiti was certainly linked to the Becket cult and the rise of pilgrimage activity at the Cathedral following his murder. In the Crypt alone, where Becket’s tomb was sited until 1220, there are at least thirty medieval figurative graffiti scenes. Amongst them are several horse and rider scenes which may be connected to the Becket story. One of these scenes, located on the first northern pier of the Eastern Crypt, is particularly interesting. It is currently behind a glass panel, placed there in the first half of the twentieth century in an effort to conserve it. It is large in size, approx. 120 cm high and 105 cm wide, deeply carved and clearly visible. The photograph below shows a to-scale drawing by David White, former Graffiti volunteer, with an image of the scene edited in MS Paint.

It is possible that this graffiti depicts St Thomas Becket returning to England from exile in France. It shares a number of similarities with the popular medieval pilgrim badge depicting this part of the Becket story. People from all walks of life purchased pilgrim badges outside the Cathedral to commemorate their journey. One of these badges could have inspired the creator of this graffiti.

In this graffiti, however, there is no clear sign that the figure held a religious position. If this image was of Becket, he would be wearing a mitre with his right hand raised in blessing (as shown on the pilgrim badge). Yet there is no evidence of a raised hand, and although there are two lines extending above the head of the figure which could indicate evidence of a mitre, this could be something else – possibly a helm.

This graffiti could instead be of a crusader knight. This idea was first proposed by Jonathan Horsfall-Turner, who noted the artistic similarities with a marginal drawing of two templar knights in a copy of the Chronica majora by Matthew Paris held at the British Library, produced in the 1250s. Although crusaders would have undoubtedly travelled to Canterbury Cathedral en route to the Holy Land, it is not clear why they would be etched into the walls of the Cathedral.

Alternatively, this image could show a pilgrim travelling to the Cathedral. In 2018, Dr Rachel Koopmans and Leonie Seliger, Director of the Stained Glass Studio at Canterbury Cathedral, identified original twelfth-century glass in one of the Cathedral’s miracle window panels, portraying pilgrims on the road to Canterbury. A number of pilgrims in this glass were depicted on horseback. It is possible then that the stained glass provided inspiration for this graffiti in the Eastern Crypt.

The study of medieval graffiti often leads to more questions than answers, and while this example is almost certainly linked to Becket and the rising prominence of the Cathedral as an important pilgrimage destination from the late twelfth century, the ultimate answers regarding its creation and meaning remain a mystery.