Remember, remember, the fifth of November! 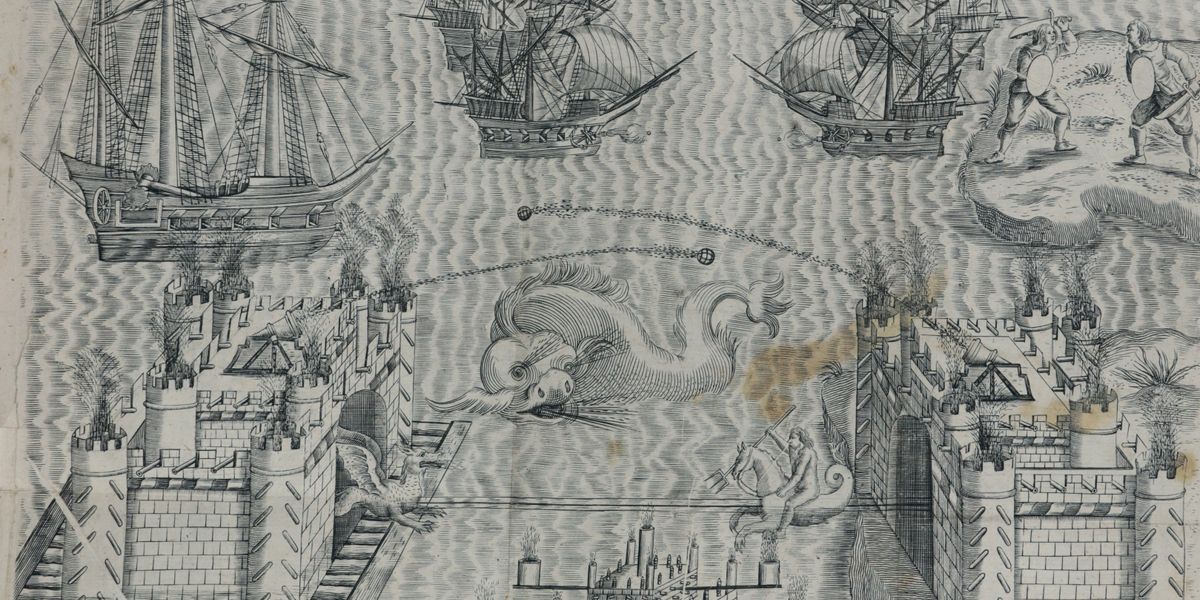 Our image this month comes from a text that had a direct influence on one of this country’s best-observed autumnal traditions. Thirty years after Guy Fawkes’ failed attempt to blow up the House of Lords in 1605, the first English instruction manual utilising gunpowder for entertainment rather than destruction came into print. Its author, John Babington, was a gunner in the army of Charles I (r.1625-1649) and a lover of pyrotechnics. During the relative peace of the 1630s, and after much cajoling by friends who had witnessed his fiery creations, Babington compiled his discoveries and detailed instructions for their replication in Pyrotechnia : or, a discourse of artificiall fire-works (1635). This folio volume is where we find this month’s dazzling image.

Our image depicts one of the grandest firework displays conceived and described by Babington. While it is unclear whether he ever had the opportunity to perform this spectacle, his text includes instruction for the creation of each individual element depicted therein. All, that is, except for the sea monster shown between the two castles, an omission that leaves the reader to speculate whether it is also a gunpowder-powered creation or merely an observer, awakened from the depths by the noise of the explosions above.

The image is lavish in its detail and presentation, as much a work of art as it is an example of how to create a stunning firework display. This intricate display includes a floating siren, two castles (one floating and one grounded), from which a fire-breathing dragon and the Roman God Neptune emerge, a floating display of the royal monogram of King Charles I, and a series of ships. Each of these creations performs a series of ‘diverse motions’, including casting cannons and firing rockets. If this display did take place, it would have been exorbitantly expensive given the technology of the time.

While we are unsure whether this display took place, we do know that seventeenth-century authorities were increasingly fond of using gunpowder for celebratory purposes. A firework display on a scale depicted here would been reserved for only the most grandiose events, typically state occasions that glorified the monarchy and nation; a coronation or triumphal entry. As Babington concludes, such displays should be conceived ‘for the pleasure of a Prince or some great person’.

Alongside these magnificent and technologically advanced performances, Babington includes instructions for creating more basic fireworks, such as Roman Candles and coloured sparks of fire. These smaller displays were increasingly being used as spectacles by civic authorities in processions and feasts, and a handbook like this would have been extremely useful for such occasions.

The Pyrotechnia’s instructions draw on Babington’s experiences as a gunner, where he learned the manipulation of gunpowder and the complex mathematics required to assess the weight of shot and powder necessary to fire a variety of artillery equipment. In fact, copies of the Pyrotechnia were bound along with his second printed work, A Treatise of Geometry (1635). This text was intended for young mathematicians and gunners, and contains a series of geometrical formulas and a set of tables in which the square root is extracted up to 2500. Clearly, Babington’s pyrotechnic skills were matched by his expertise as a mathematician.

Babington’s ‘rare Worke’ gives us a glimpse of the place of gunpowder in England just seven years prior to the start of the Civil War. In the early sections of the book, Babington mentions that he had the chance to experiment and perfect his craft with gunpowder displays thanks to the relative

peace of King Charles’ reign. That cannons and copious amounts of powder were used for public entertainment as well as artillery is significant, giving us an insight into both the interests of the early modern audience and the English political climate of the early seventeenth century. Gunpowder was an expensive resource that was closely controlled by state authorities, and it is unsurprising that many firework displays depicted battles and celebrated martial victories. While many of Babington’s creations represent mythical creatures, they are typically engaged in a battle or accompanied by warring castles and naval skirmishes.

Interestingly, Pyrotechnia is dedicated to the first Earl of Newport, Mountjoy Blount (c.1597-1666), who, in addition to being Babington’s commander as Master of King Charles’ Ordnance, is famous for making large sums of money for himself and King Charles I through the sale of exorbitantly priced gunpowder to the King of Spain, Philip IV (r.1621-1665), who wanted it for warfare rather than frivolity. Gunpowder, then, was a resource over-consumed by some and desperately needed by others.

Often, those who planned displays hoped that audiences would watch fireworks fearfully, cowed by their explosive and allegorical force; as such, firework displays often had a narrative with moral undertones. An example of this comes from a 1629 display in La Rochelle, which featured the mythological Greek figure Perseus’ legendary success over the sea monster Cetus as an allegory for the siege of the city by the Roman Catholic French, thus aligning the city’s Protestant Huguenots with the evil sea monster.

Nevertheless, despite the pyrotechnicians’ efforts to moralize through display, most allegorical firework displays did not resonate in such a way with spectators. Rather, early modern audiences were excited by the grand spectacle of the fireworks devised by men like Babington. We modern audiences clearly share this excitement, and many of us will go out into the night to see the sky light up on the fifth of November; while we may not encounter battling dragons and warships and sirens, we will nonetheless marvel at the colourful explosions bejeweling the sky.