Remarkable rather than mediocre 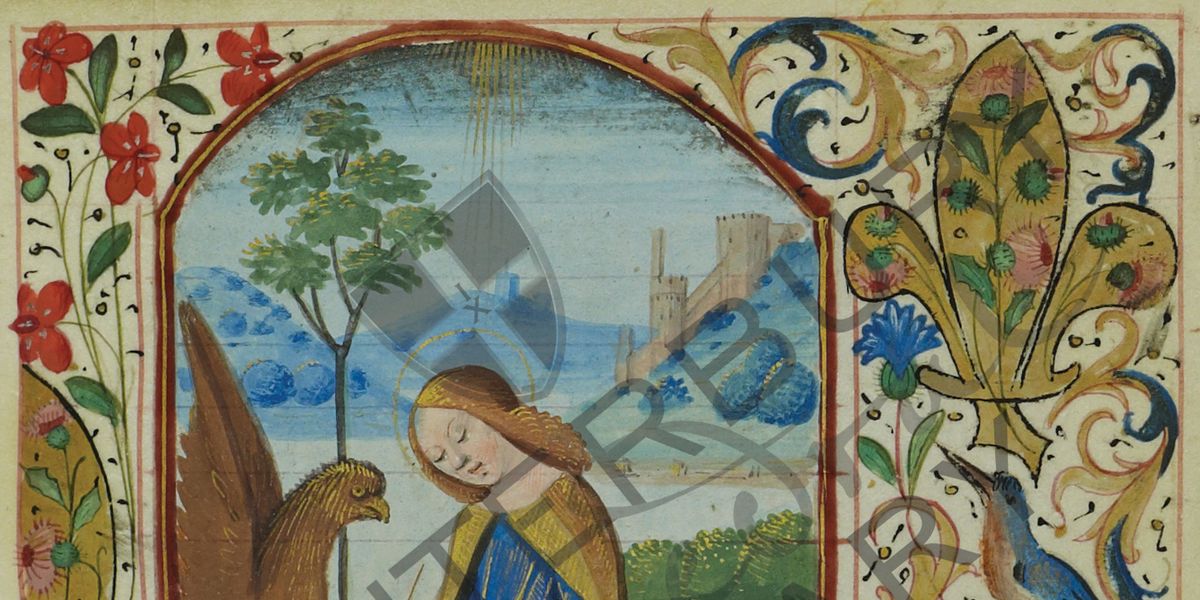 Fifteenth century French Books of Hours are not especially rare. In fact, as medieval artefacts go, they might even be said to be rather common. Nevertheless, as Jayne Wackett has described in earlier issues of ‘Picture this…’ they remain some of the loveliest books ever made. Naturally, the quality varies which is perhaps why Neil Ker described this one held in the Cathedral Library with that killing adjective ‘mediocre’. However, I want to share with you what I think makes this particular book of hours remarkable rather than mediocre. But first let’s have a closer look at this delicate little vellum prayer book of just 160x118mm.

This is the opening illustration of St John the Evangelist recognisable via his symbol of the eagle. This is one of 15 thirteen-line miniatures. In Books of Hours the Gospel readings usually follow the calendar and here begin with John, sitting here in an arch-topped miniature over a three-line high decorated initial, surrounded by a full border. He appears as a rather feminine figure with softly swept back long, light brown hair, wearing a yellow cloak and a long blue robe. Calmly writing his Gospel in a country scene surrounded by aptly reflective water, John is distanced from ordinary mortals by being placed on an island, presumably an evocation of Patmos, with a walled town in the background and another tower in the blue far distance, a spindly tree for shade and his eagle for company. Gold rays from heaven directly above indicate the divine inspiration for his work. It is clear that this illuminated leaf is itself, as Roger Wieck has described other miniatures in Books of Hours, a ‘painted prayer’. I am struck by how, amidst the broad swathes of flowers and acanthus swirls of the border, three and a half fleurs de lys allude to the book’s French provenance, a symbol which I have noted is also used as part of the border decoration in two other French Books of Hours of this period; Harvard, Houghton Mss Latin 250 (p.286 and 287) and 251(f39r and 39v). The bird on the right hand side of the border may be a rather short crane, an appropriate choice (if it is so) to represent the Evangelist, as it was supposed to sleep with a stone in its claw which would drop and rouse the bird if it fell asleep, and so the Evangelist guards the memory of Christ by writing his Gospel.

The opening twelve folios form the Calendar, immediately preceding the miniature of St. John, and are a listing of saints’ days; the most important being highlighted in gold with alternate blue and red letters in French and Latin. Calendars are always included and often illuminated with small images of the labours of the year, to guide the reader through the liturgical year. Calendars also helpfully highlight particular saints, here French ones such as St Geneuiesue, St Denis and St Marcel (on 3rd January, 9th October and 3rd November respectively) but it is the liturgical texts, the Hours themselves, which pinpoint the ‘Use’ a book of hours follows and there were various types. The Use of Sarum was usual for English Books of Hours but this one’s Hours of the Blessed Virgin employs the ‘Use of Paris’. This might be thought to give some clue to the intended destination, if not the provenance, of the book. However, it is not that easy, as not all ‘Use of Paris’ books of hours were made or used in Paris and indeed vice versa, books of hours with other ‘Uses’ were frequently made in Paris as well as elsewhere, such as the Harvard Houghton Ms Lat 251 which is thought to have been made in Paris, on the Île de France, but follows the ‘Use of Rome’.

We may surmise from the many clean copies of Books of Hours still extant that some have been read rather less frequently than the daily round of prayer expounded in the work itself. For these books were high status objects; expensive and often beautifully bound in velvet or gilt-embossed. This book of hours with its fifteen large miniatures, and smaller pretty and gilded illustrations was made to be admired by its owner and his or indeed her friends; for many Books of Hours were owned by women. The French poet, Eustache Deschamps (1346-1406) wrote a telling ditty suggesting these books were valued more for their outward appearance than for their pious contents. Here is a snippet robustly translated by Eamon Duffy in his Marking the Hours [p.21]

Get me an Hours of the Virgin,
Matched to my high degree,
The finest craftsmen can manage
As graceful and gorgeous as me…

This increase in female patronage and lay piety, evidenced through the commissioning and usage of such beautiful books by wealthy women, is well documented and such women may also have taught their daughters to read using their books of hours.

Developing the theme of use, let us consider how very personal these books were; too tiny to read with more than one other person, they were the repository of your whispered devotions, your innermost thoughts and prayers, your pathway to approaching the divine. The Offices of the Dead, which were the prayers said before a funeral or at the anniversary of a death, are also included in this book of hours. These leaves open with the depiction of a burial service, allowing the user of the book not only to reflect upon their own death and the world to come but also to recall, remember and pray for those loved ones who had already died; making this book and others like it a personal memory bank, a prayer engine imbued with love for those remembered dead. This book of hours provides compelling evidence on this nexus or crossroads of identity, faith, death and memory – but that’s for another paper.