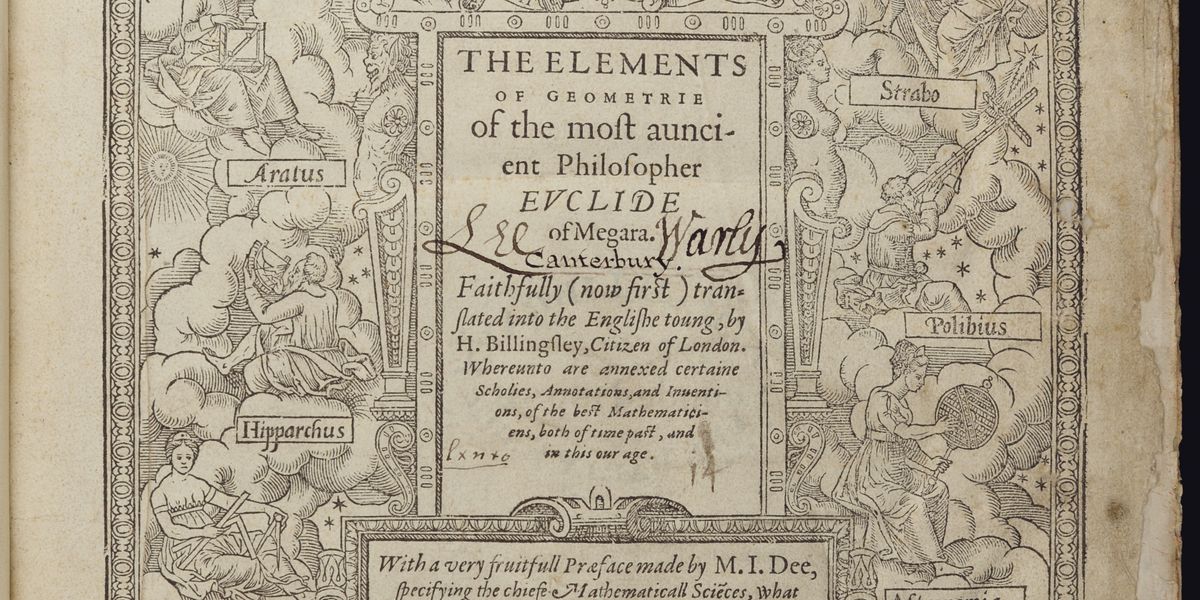 Many of us will remember geometry lessons at school based on Euclid’s Elements, involving working out the proof of a theorem which, if successful, was concluded by the statement ‘Quod erat demonstrandum’ (Q.E.D.). Euclid was a Greek mathematician active around 300 B.C. whose works became very popular again in the Renaissance period and remained on the school mathematics syllabus into the modern era. Large numbers of the Greek text and Latin translations were published in the fifteenth and sixteenth centuries. The Cathedral Library has a copy of the first complete edition, printed in Basel in 1533 (shelfmark W2/X-7-22).

The Cathedral Library also has a copy of the first translation of Euclid into English which was printed in London in 1570 (shelfmark Elham 143). This copy belonged in the eighteenth century to the Canterbury solicitor Lee Warly (1715-1807), the founder of the Elham Parish Library now deposited at the Cathedral Library. His signature appears on the title page and again on the final page with the date 1770.

This English translation was the work of Sir Henry Billingsley (d. 1606), a London merchant whose own copy of the Greek text of Euclid is in Princeton University Library. The title page announces that the book has ‘a very fruitfull præface made by M. I. Dee [Master John Dee], specifying the chiefe mathematicall sciences, … where, also, are disclosed certaine new secrets mathematicall and mechanicall, vntill these our daies, greatly missed’. In fact, Dee provided an extensive additional commentary to the text of Euclid as well as this introduction

The final leaf of the book has the colophon giving the name of the printer (John Daye) and the date of publication (1570). Above it is a large engraved portrait of John Dee aged 40, dated 1562, with the enigmatic motto ‘Liefe is death and death is liefe’ and his initials ‘I. D.’ at the foot.

John Dee (1527–1609), described in his entry in the Oxford Dictionary of National Biography as ‘mathematician, astrologer, and antiquary’, was a significant and controversial figure of the reign of Elizabeth I, partly because of his interest in attempts at conversing with spirits. The introduction and extended commentary to the 1570 English translation of Euclid are described by ODNB as Dee’s most influential work and show his considerable abilities in mathematics. He presumably was also responsible for the overall design of the title-page woodcut. There are 50 surviving copies of the book recorded by the English Short-Title Catalogue (http://estc.bl.uk/S106699).

The title page has a large woodcut engraving, with two slots for the text of the title. The engraving contains many allegorical, mythological, astronomical and historical figures representing mathematics and related scholarly disciplines. At the top are mythological figures representing Time. Below them is the globe of the world. Down the left-hand side there are figures of Ptolemy of Alexandria (c.100–c.170, mathematician, astronomer, geographer) shown wearing a crown as he hands down his knowledge to Aratus (c.315–c.240 BC, astronomer), and Hipparchus of Nicaea (c.190–c.120 BC, astronomer, geographer and mathematician) who is shown looking up to the sky with his astrolabe.

On the right-hand side of the title page Marinus of Tyre (70–130, geographer and mathematician) passes on his knowledge to Strabo (64/63 BC – c.24 AD, geographer) who is shown drawing a map with the name ‘Anglia’; he is followed by Polybius (c. 203 BC – 120 BC, an ancient Greek historian) shown with the measuring equipment of a geographer. Below these are the allegorical figures of Geometry, Astronomy, Arithmetic and Music, representing the mathematical disciplines, with their patron, the god Mercury, presiding at the foot of the page.

This translation will have been very expensive to produce. It has nearly 1,000 pages and a very large number of tables and woodcut geometrical diagrams. Book Eleven has four leaves of woodcut diagrams which can be copied on to plain paper, cut out and assembled into three-dimensional geometric figures such as a cube, several pyramids, a dodecahedron, and an icosahedron. The image shows one of these, the twelve-sided three-dimensional figure called a dodecahedron.