Plenty of Fish in the Sea 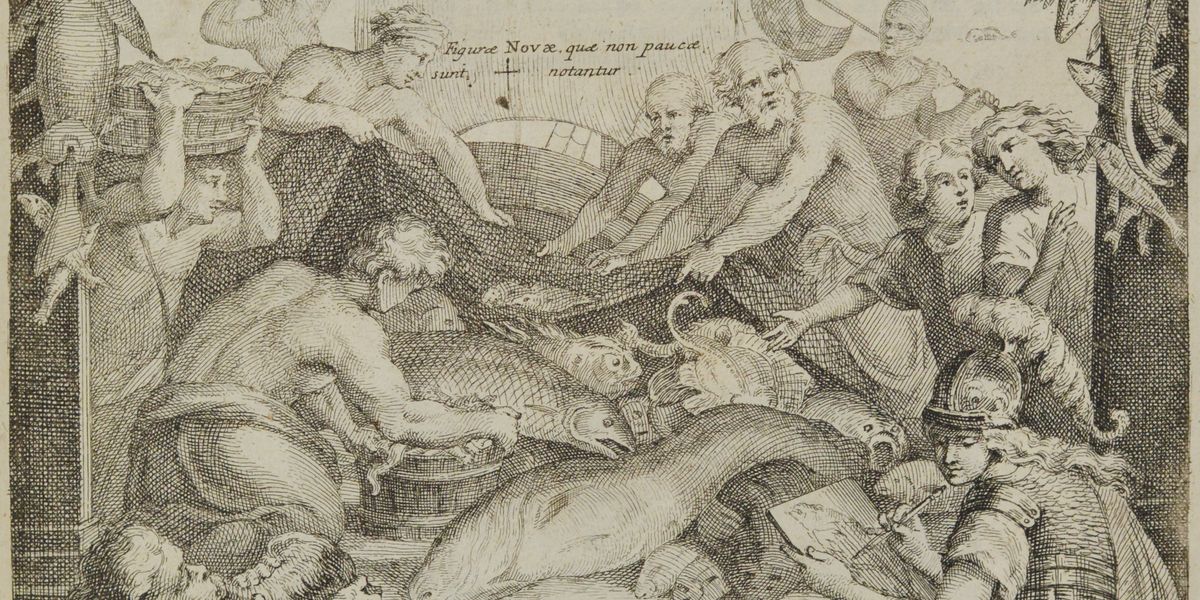 A swim in cool coastal water can offer a welcome break from summer heat; as the early modern commentator William Percey put it, people swim ‘to cool themselves from the parching beams of the Sun, to clearifie their bodies of sweat, to whiten and purifie the skin’ (The Compleat Swimmer, 1658). In the muggy heat of a modern summer such sentiments no doubt chime with many of us; however, Percey goes on to stress that people should practice the ‘art’ of swimming ‘to fortifie themselves for the danger of waters’. Coastal waters in particular, held many dangers to pre-modern people rarely trained to swim and this month’s Picture This looks at an image that might, misguidedly, strike fear into the hearts of many swimmers.

Our image is of a hammerhead shark, or, as it was known colloquially at the time, a ‘balance fish’. This elegant copper engraving shows all of the characteristics of this most beguiling group of sharks (there are nine species extant). The laterally extended head, now known as a cephalofoil, is decorated with a pair of bulging, doughnut-like eyes, while the series of eight fins and the caudal tail are depicted in close detail to aid future identification of the species, as if its head were not clue enough. From above, the artist has captured perfectly the blend of natural elegance and peculiarity embodied in this creature, and the front-facing image adds definition to the nooks of its cephalofoil, suggesting that this was a smooth hammerhead, and adds two rows of grim teeth.

The image is taken from a publication at the heart of the seventeenth-century scientific revolution, Francis Willughby’s De historia piscium (‘The History of Fish’), a grand, encyclopaedic text published by the Royal Society in 1686. Willughby (born 1635) died in 1672 aged only 36, so the manuscript was prepared for publication by his lifelong tutor and research companion John Ray (1627-1705). Ray, a parson and naturalist, divided the work into four sections with the main body of the text in Latin, the standard international publishing language at the time. Ray was in charge of sourcing and selecting the plates that accompanied the text, of which there are 189 separate images throughout the book.

While our image might seem to emphasise the sensational aspects of a hammerhead’s unique anatomy, the flat head, bulbous eyes and rows of Spielberg-esque razor-sharp teeth, the image is there to inform rather than titillate the reader. The De historia is a piece of Ichthyology, or ‘fish science’, that describes, classifies and categorises around 420 species of fish, 178 of which had never been described previously. The species are separated into three classes: cetaceous (whales, dolphins etc.), cartilaginous (sharks, rays etc.) and bony fish, with various sub-divisions existing within each class to make it easier for readers to find and identify specific specimens. The descriptive text of each species, found separately from the images, was intended to describe in detail the external characteristics of each specimen, eschewing the mythical and fantastical elements typically included in earlier works of natural history.

The hammerhead was not an unfamiliar beast to European readers. Then, as now, hammerheads were distributed worldwide in along coastlines and warmer waters, making them common victims to fishing. Indeed, the Latin name given on our engraving – ‘Zygæna Salviani’ – is derived from Aristotle’s (384–322 BC) own name for the hammerhead, zýgaina, from the Greek word zygòn, meaning ‘yoke’. Despite this long lineage, the scientific study of fish was still very much in its infancy in the seventeenth century, and Willughby and Ray’s work paved the way for modern methods and taxonomic standards.

This is evident in the fact that the text opens with an attempt to fix the scientific definition of a fish, settling on: ‘Animal aquatile, pedibus carens, vel squamis vel cute nuda contectum, pinnis natans, in aquis perpetuo degens, nec sponte unquam in siccum exiens’ (‘Aquatic animals that lack feet, have naked skin or skin, swim by means of fins and live perpetually in the water, never coming onto dry land through its own volition’). This description departs from the traditional definition of fish as aquatic animals, meaning that animals like hippos, beavers and crocodiles traditionally considered fish, were rejected from the De historia due to their external features and ability to live outside of water.

In the bottom right corner of the image we find the name ‘S. PEPYS’, referring to none other than the diarist Samuel Pepys (1633-1703) who was then president of the Royal Society (as indicated

by the ‘Præs. S. R.’). The De historia was an exceedingly expensive publication; its size, its scope and the quality of its 189 plates required a considerable pre-publication investment, and Pepys ended up covering the costs of eighty of the plates, hence why the term ‘Sumptibus’, or, ‘at the expense of’, is printed alongside his name. The plates were by far the most expensive element of this publication, with seventy donors helping fund the eighteen artists involved in their creation. The images were typically derived from depictions found in other publications that were then modified using the observations of Willughby and others in order to fit Ray’s exacting standards that barred, as he termed them in a letter to his friend Tancred Robinson, ‘accidental or monstrous’ features being represented.

Despite the scholarship and the artistry of the De historia, it sold poorly and almost bankrupt the Royal Society. Famously, the financial strain meant that the Society could not finance the publication of Isaac Newton’s Philosophiae Naturalis Principia Mathematica (Mathematical Principles of Natural Philosophy), which ended up being financed instead by Edmond Halley. Regardless though, this enchanting shark engraving reminds us of the wonders and the fragility of the seas that surround us, a fitting legacy in these times when we all too aware of the dangers that face them.