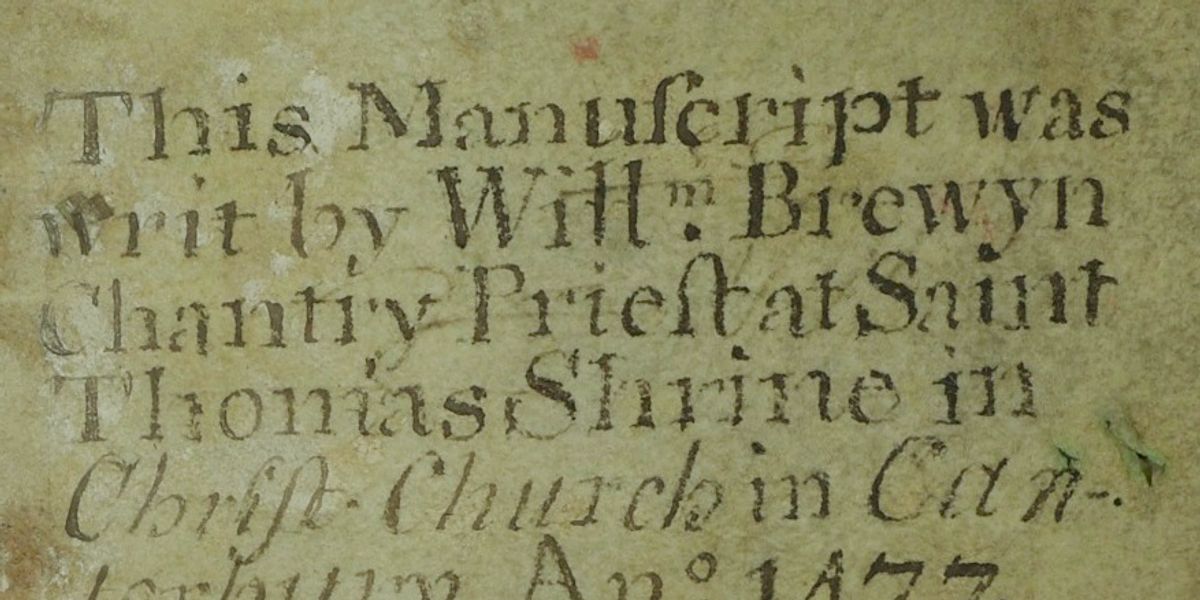 William Brewyn’s pilgrim guidebook (Canterbury Cathedral Archives and Library, Add MS 68) is a small manuscript (only 140 x 97 mm) containing advice for pilgrims travelling between two of the most significant pilgrim sites in later medieval Europe: Canterbury and Rome. Written in the 1470s, Brewyn’s guidebook is an astonishing survival as it was likely intended (and perhaps even used) as a practical travel guide, to be taken on a journey. It quite possibly, therefore, left the protective confines of a library, which most other medieval manuscripts have relied upon to survive. Indeed, the fact that the book was first recorded in 1877 in Sir Henry Ingilby’s collection at Ripley Castle in Yorkshire and not at Canterbury, has led historian Charles Eveleigh Woodruff to speculate it perhaps arrived there through exchange between various pilgrims’ hands.

The manuscript appears to have been written with the intention that it be used by pilgrims. It offers advice on practical matters like money exchanges and cheap travel routes, then finishes with hymns in Middle English (seemingly of Brewyn’s own creation) that could be used in worship anywhere. It also includes a papal bull issued in 1469 by Pope Paul II (1469-71) which excommunicates those who assault pilgrims travelling to Rome; one imagines that Brewyn included this as supporting evidence (or perhaps a deterrent) against those looking to hinder the owner’s journey. The table of contents also indicate that there was once a further guide to Jerusalem in the manuscript, but it was cut out at an unknown date (see the remnants after f. 39r and f. 94r).

Some of the best folios to illustrate Brewyn’s work are 40r-41v, shown above. In these folios, we can see Brewyn listing the locations and distances en route between Calais and Rome. These folios and their content, offering multiple insights into Brewyn’s experiences and understanding of pilgrimage, are fascinating. For example, Brewyn uses a combination of formalised cursive handwriting styles called ‘Anglicana’ (used primarily in England) and ‘Secretary’ (originally from Italy) which were popular in the late fifteenth century. These scripts and their good quality demonstrate that Brewyn was a trained and travelled English scribe, who read widely in the newly developing styles. His English origin is suggested by his preference for the ‘Anglicana’ style, apparent in the two-compartment ‘a’ in ‘ad’ and thicker textura aspect. However, his experiences on the continent are also suggested by cursive additions of the ‘Secretary’ style, evident in the neat loops on the ascenders of ‘l’ in the abbreviated ‘mil[liaria]’ at the end of each line.

Brewyn adds his personal advice and insights to some listings. Notably, the first line of f. 40v (top left) reads in a mixture of Latin and English ‘To Bune (Bonn) iiii miles. Here are “fals shrewys summe” unless they have become better.’ In other words, Brewyn informs his readers of the town’s reputation and potential hazards, generated most likely from his bad experiences with devious citizens, though he concedes that things might have improved since his last visit. Other entries on the following page (f. 41v) are similarly brief, ‘To Merane iiii miles. Take note of the market’, but if one turns to folios 41v-42r the true extent of Brewyn’s personal insights is revealed.

Here Brewyn writes with greater confidence and detail. He writes on line 8 on folio 41r: ‘To Hostia x miles; one ought to be ferried across the water for one crucifer.’ Not only does he suggest the best route, but he also helps protect pilgrims from being overcharged, which was quite probably a common experience for travellers. His practical comments continue on to the next page where Brewyn introduces a subsection titled alia via or ‘an alternative route.’ Here Brewyn offers pilgrims another path which avoids Cologne’s high taxes, but he finishes by warning about the accommodation ‘because it is not much used.’

Nearly all these comments must have come from Brewyn’s own personal experiences. When he finally began writing around 1470s, he did so having spent many years travelling and recording the details of locations along the way. This can be assumed based on the other instances where Brewyn presents himself as an eyewitness. For example, in his recording of the papal excommunication (ff.38r-39v), Brewyn claims he was ‘present at the time … at the door of the church of St. Peter’ and that ‘I, the aforesaid William, copied the excommunication… from the bull of the lord Pope Paul as it was hanging over the door…’

These directions are brief interludes to the wider work, wedged between forty folios of descriptions of the churches of Rome and another fifty about Rome’s monuments and saints’ legends (largely copied from Ranulf Higden’s Polychronicon and Jacobus de Voragine’s Legenda Aurea). Surely for a guidebook, it would be unnecessary to describe anything more than a brief outline of where and what. However, as Anthony Bale writes, Brewyn’s guide also answers the why; it is ‘at once a personal record of a journey made and a guide for others yet to make their journey.’ The fact that Brewyn sets out all the churches, dates and their associated salvific indulgences first (to be read, digested and inspired by) shows that he recognised that the imagined pilgrimage was as important as the journey itself. In addition, by placing the route amongst these spiritually significant sections, Brewyn reinforces that the practical process of travelling is of equal spiritual importance. This image expresses how spirituality and practicality are intrinsically linked. For Brewyn, just as in the attainment of Rome’s indulgence, the practical action of physically visiting each location and travelling between is a main element of the penitential act.

With such personal insights, we would hope to know more about William Brewyn. However, our understanding of his life is based almost entirely on his own comments. The previous Ripley owners wrote that he was a ‘Chantry Priest at St Thomas’ Shrine’ in Canterbury Cathedral on the formerly pasted down first vellum leaf, which was revealed when they rebound the manuscript in its current ornamented calf skin binding. Nothing fully corroborates their conclusion; Brewyn refers to himself twice as capellanus or ‘chaplain’ (ff. 42r, 96r) and his only direct relation with St Thomas Becket’s Shrine is when he was present at ‘the feast of the translation’ of St Thomas’ in 1470. However, Brewyn does include a detailed record of Canterbury’s collection of relics (ff. 95r-96v) and he refers to showing ‘the tonsured head to escape the tax’ in the town of Ulm (f. 40v), using the accusative singular ‘coronam’ (meaning ‘the tonsure’) as if he was writing from his own experience. This would all suggest he was at least a seasoned monk of Christ Church Priory who frequently travelled to Rome. Indeed, he claims he recorded Pope Paul’s papal bull ‘in the year of the Lord MCCCCLXIX’ (1469), meaning he was in Rome the year prior to the ceremony in Canterbury.

This conclusion is supported by the only other reference to Brewyn’s existence, made by the monk Casimir Oudin (1638-1717). Oudin’s bibliographical guide of ecclesiastical writers called Commentarius de scriptoribus ecclesiae antiquis (1722) recorded a ‘Guillelmus Brevinus’ who resided in Rome during the pontificates of Pope’s Paul II and Sixtus IV (1471-81). This he based upon a now-lost manuscript attributed to ‘Brevinus’ called the De septem principalibus Ecclesiis Urbis Romae or ‘Concerning the Seven Principal Churches of the City of Rome’ in the Vatican Library. Not only does the timing and location match, but the content fits with the Canterbury Cathedral manuscript. This appearance would suggest that other copies of Brewyn’s work once existed in Rome and, furthermore, it helps corroborate that Brewyn’s accounts are most likely first-hand. This certainly makes our manuscript even more significant, since it is perhaps the only edition left of a widely read guide.

I am grateful for the thought-provoking advice from by my lecturers during the writing and researching of this article. In particular, I must give thanks to Dr David Rundle, Dr Anthony Bale and Dr Ryan Perry for helping guide my research; I also thank Dr Robert Gallagher for his assistance and the staff of Canterbury Cathedral Archives and Library for giving me the opportunity to investigate such a wonderful manuscript.

For images of CCA-Add Ms 68, see the Cathedral’s Image Gallery [link to <https://ims.canterbury-cathedral.org/viewcontainer.tlx?containerid=15101414363>.