Piecing a puzzle together 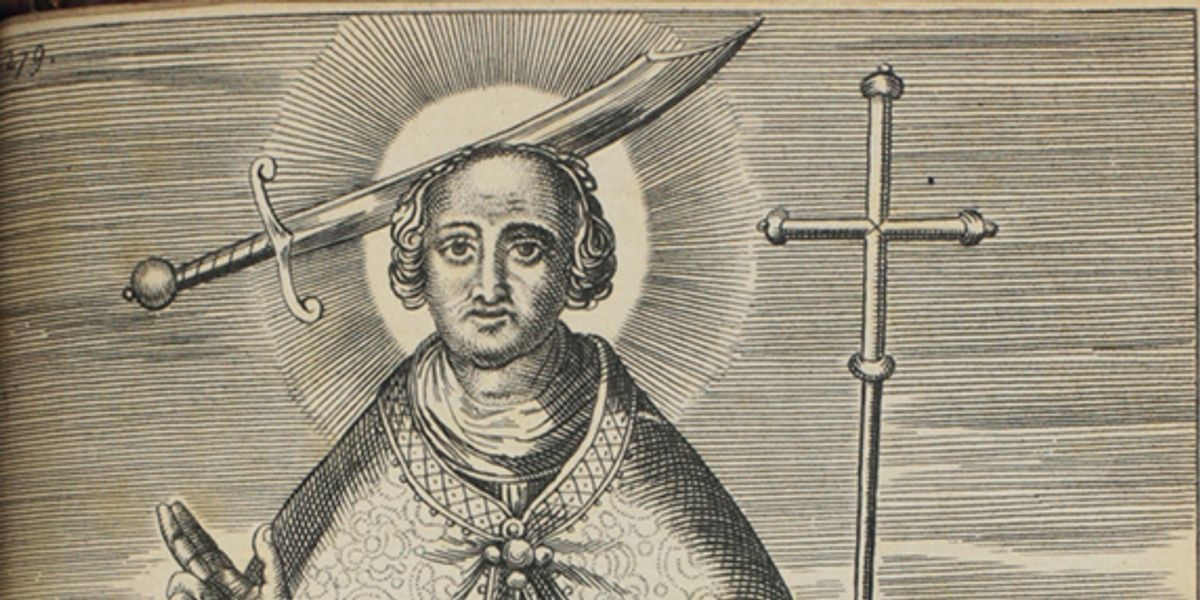 The monthly ‘Picture This…’ articles highlight items from the collections of Canterbury Cathedral Archives and Library and related collections, and are written by postgraduate students from the University of Kent and Canterbury Christ Church University, staff from the three institutions and guest contributors. The year 2020 is an anniversary year of St Thomas Becket, and throughout the year ‘Picture This…’ will focus on Becket

What do we mean by an illustrated book? This month’s image is taken from the opening pages of a book titled The life or the ecclesiasticall historie of S[t]. Thomas Archbishope of Canterbury (W2/X-3-32), printed in 1639, which records the biography of St Thomas Becket. This text has been supplemented with a number of images, but these are not original to the printer’s book. Among these is the engraving facing the title page, shown above. Depicting the martyrdom as it is happening, the image shows three of the four knights responsible for Becket’s murder in Canterbury Cathedral. The image is gruesome, with one knight’s sword plunging through Becket’s upper body, and the other two knights poised to attack as he kneels on the cathedral steps.

A more static image is found at the end of the book, which shows the saint holding his staff of office, his hand raised in a gesture of blessing, with a sword stuck through his skull. These images have been pasted onto blank pages or inserted as full pages themselves, meaning they were added only after this book became available in print. While no date is included on the inserted pages, the additions themselves show us some engagement with the book by a reader. Whoever purchased this text and added these images wanted a visual reminder of the saint to accompany the literary account of his martyrdom.

This account of Becket’s life is detailed in 347 pages. It chronicles his birth and upbringing in London, his education and training in the church, correspondence to and from civic and religious officials, and finally his martyrdom, burial, and subsequent sainthood. Attributed to Caesar Baronius (1538-1607), a cardinal and historian in the Catholic church, the text is excerpted from a larger, earlier work. Printed marginal notes indicate that much of the material is “collected out of Card[inal] Baronius”, from works first in circulation between 1586-1588. While the title page and preface to the book do not tell us who translated this biographical work from Baronius’ Latin text into English, and then collated it with the prefatory and introductory material, the printer’s imprint can provide some clues.

This imprint is deliberately sparse, reading only “Colloniae” and the date 1639 in Roman numerals. Fortunately, some other printed books survive from the same printing house and from these we know that “Colloniae” was an English Catholic press located in Paris and run by a woman. Whilst widely known simply as the “widow of J. Blageart”, evidence suggests that her name may have been Françoise. The imprint also reflects that women were actively involved in the commercial book trade from the later Middle Ages and throughout the early modern period. Additionally, English Catholics in the seventeenth century were interested in the transmission of texts concerning their religious history and national identity, to the point of working to collect and translate them from other sources. The production of Catholic texts in England was forbidden during this period, and printers like the widow of J. Blageart worked to create literary texts for their English-speaking neighbours abroad and intended their distribution throughout the continent.

Another later owner also left his mark on this book, adding a new binding, as well as his signature and the date inside the front cover. Written neatly in pen on one of the blank sheets preceding the original title page, we can see the phrase “E[x] libris” (the Latin for “from the books/library”) and the name and date “J. M. Teale, 28th Jan 1786. Maidstone Kent”.

While there is no way of knowing whether it was Teale who added the two pictures of Becket to this book, there is evidence of Teale’s use of this text for personal study. Hidden away in the introduction “To the Reader”, Teale has underlined a portion of the text and left himself a note in the margin. The underlined text reads “and hee the shadowe of Antichrist”, which Teale has defined for himself with “I.E. He was [the] Shaddow of [the] Pope. [Alexander III]”. This is a rather inflammatory statement to include in the Catholic-authored biography of an English Catholic saint, although it doesn’t refer to St Thomas himself. But this contentious little marginal note offers up more information than just Teale’s personal beliefs: it tells us quite a lot about the history and use of this book.

At some point, this pocket-sized book printed at a Catholic press in Paris was transported to Protestant England, during which time its owner (though it likely saw many owners) used it as a contemplative object, adding images to aid study. By the time it came into J. M. Teale’s possession, this book had existed for 147 years. Teale’s marginal note and the inclusion of the printed images of Becket demonstrate quite clearly a sustained and long-standing interest in the life and martyrdom of St Thomas Becket regardless of Catholic or Anglican belief. From his death in Canterbury Cathedral in 1170 to Cardinal Baronius’ Latin biography of the saint in the 1580s to the English translation printed in 1639 to Teale’s personal study in 1786, The life or the ecclesiasticall historie of S[t]. Thomas Archbishope of Canterbury shows that Becket was an important subject of individual study and reflection across six centuries — or eight centuries, if, like me, you venture into the Cathedral Library later in the year to read this book yourself during Becket2020.