The portrayal of Oliver Cromwell 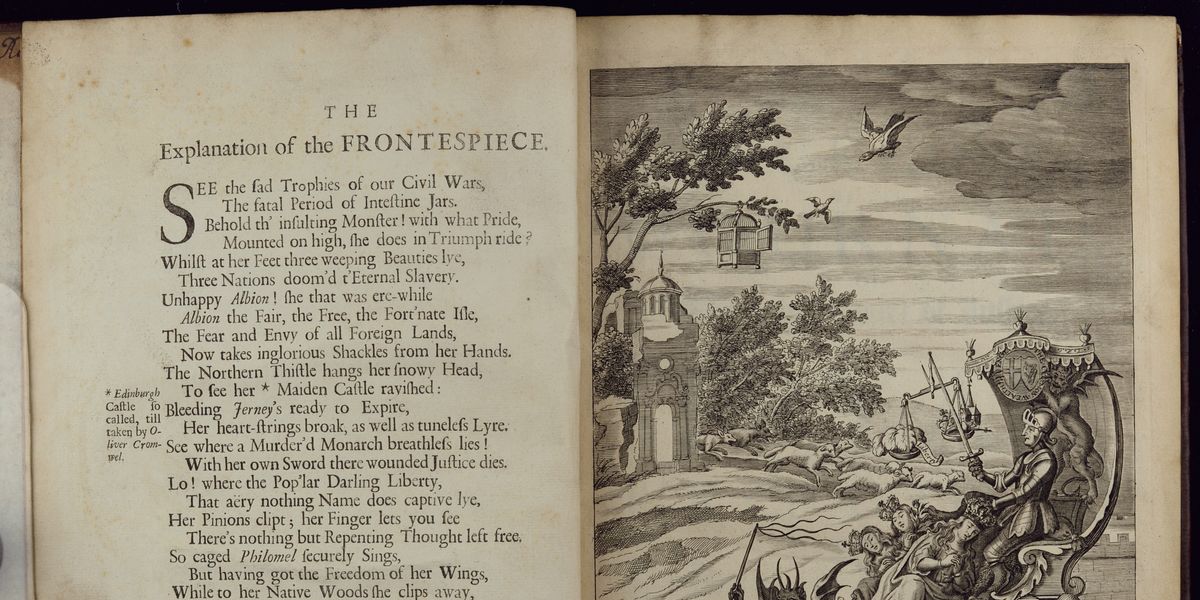 The subversion of a government and the barbarous murder of a lawful king?

by Anne Baigue, Centre for Medieval and Early Modern Studies, University of Kent

This intriguing image is the frontispiece to A True copy of the journal of the high court of justice for the tryall of King Charles I, published in 1684 by John Nalson, (CCL H/O-4-8) some fifteen years after the event.  The book consists of a detailed account of the trial of Charles I to which Nalson added a long introduction, prefaced with a poem, both of which are useful in helping us to understand the ideas contained within the image. Poem, introduction and image leave the reader in no doubt of Nalson’s view that the execution of Charles was the barbarous murder of a lawful king.

The principal figure represents Oliver Cromwell mounted on high and riding triumphantly in full armour.   Although having had no real military training before 1642, Cromwell’s military record during the war was hugely influential in Parliament’s success, a record which continued into the Commonwealth period when Cromwell became the feared and hated leader of the armies who fought in Ireland.  Here, although depicted as a strong and powerful figure, he is not the protector of the English people, but is a ‘monster’ and destroyer.  He is shown with the legs and feet of a wolf, therefore a predator, not a protector.  The image of the wolf is often associated with the image of a warrior, but also associated with the devil, as here, complemented by the she-devil perched in front driving the chariot.  In biblical imagery the wolf is seen as a false prophet, just as Cromwell was perceived to be by his adversaries.  He may have claimed that he was following the will of God, but in the eyes of Nalson he was rendering the ‘freest people of the world the vilest slaves in the universe.’  Matthew 7:15 warns people to ‘Beware of false prophets, which come to you in sheep’s clothing, but inwardly they are ravening wolves.’

Regarding the figure of Cromwell, the poem reads:

‘Behold th’insulting Monster! With what Pride

Mounted on high, she does in Triumph ride?

Whilst at her Feet three weeping Beauties lye.’

Here, Cromwell is being linked with Pride, a female allegorical figure, hence the reference to ‘she’ in the text. As the proverb warns, ‘pride goeth before destruction and an haughty spirit before a fall’ (Proverbs 16:18, King James Bible), a fate which was to befall Cromwell’s body following the restoration of the Stuart monarchy. In 1661, Cromwell was posthumously tried, found guilty of high treason and ‘executed.’  His body was hung from the Tyburn gallows in chains and his head displayed on a spike at Westminster Hall.

Another allegorical quality which fits with Crowell’s depiction here is Deceit, sometimes portrayed as a female with animal’s feet. The figure might be seen to be representing not just Cromwell, but also the Deceit he practised on the British people. Such an interpretation would certainly fit with Nalson’s ideas contained within the introduction.  Nalson was a royalist and a staunch supporter of the Restoration government.  Ordained as a clergyman in 1668 he was a firm believer that the Church of England was the one true religion and that the proliferation of Protestant sects after the Civil War had been a disaster for England.  He believed that Cromwell had deceived the people into thinking that religious freedom was a good thing.

This idea that the freedom offered by Cromwell was but a deception, is picked up again in the top left hand corner of the image. A flock of sheep can be seen running from a ruined mansion, and, now no longer under the protection of the ‘slain shepherd’, they are being closely pursued by a pack of wolves. In exchange for the government and laws of pre-Civil War days, they instead meet their death from the wolves’ ‘devouring jaws.’

A further example which shows that freedom may not always be as desirable as it at first appears is demonstrated by the small bird escaping from the cage. The poem tells us that this is Philomel:

But having got the Freedom of her Wings

While to her Native Woods she clips away,

In Greek mythology Philomel was a princess who was raped and kept captive by her attacker, her brother-in-law, Tereus. As Philomel attempted to escape her tormenter, the gods turned her into a Nightingale and Tereus into a hawk.  In this guise he swooped down and, capturing her in his talons, made the joy of her escape short-lived. In the same way, having lived through the horror and violence of the Civil Wars, England’s suffering people gain their freedom only to be devoured by the hawk.

The Civil War was not just an English conflict, but a British one, with Scots and Irish drawn into the fighting from the outset. Here, the three separate countries of Britain are represented by three crowned figures shackled and lying at Cromwell’s feet on the floor of the chariot. Along with ‘Unhappy Albion’ (England), the snowy thistle that is Scotland hangs her head and the lyre of Ireland is broken and tuneless:

Unhappy Albion! She that was ere-while

The Fear and Envy of all Foreign Lands

The chariot is pulled by two monstrous animals, each with the head of a dragon and the body of a horse. As the chariot powers forwards, two bodies can be seen crushed under its dagger-spoked wheels, which, for good measure, are also emitting fire. One of the characters is Charles I whose head has been severed from his body; the other is the figure of Justice. Her sword, the emblem of her power, is on the ground by her side and the scales symbolising her impartiality are scattered nearby.  Her vulnerability is contrasted with Cromwell who, seemingly oblivious to her demise, lifts up a set of scales with a sword of his own. The scales are balancing liberty on one side and the crown, an orb and the church, the traditional symbols of the state, on the other:

More foolish, sure, and much more brutish Men,

Became the Triumphs of the Black Old Cause.

Are the people to be deceived by their rulers once again? Believing that the past should be remembered primarily so that we can learn lessons from it, Nalson draws parallels in his introduction between the upheavals of the 1640s and the events of his own time. He was writing in the unsettled period of the Popish Plot of 1678 and the Exclusion Crisis of 1679-1683 when deep divisions arose over attempts to exclude James Duke of York, brother to the childless King Charles II, as heir to the throne. Using poem and picture, Nalson exhorts us to beware.

True copy of the journal of the high court of justice for the tryall of King Charles I as it was read in the House of Commons and attested under the hand of PHELPS, clerk to that infamous court. Taken by J Nalson, LLD Jan 4 1683 with a large introduction.

Printed by HC for Thomas Dring at the Harrow at the Corner of Chancery Lane in Fleet Street, 1684. CCL H/O-4-8

Graham Edwards, The Last Days of Charles I (Alan Sutton, 1999)