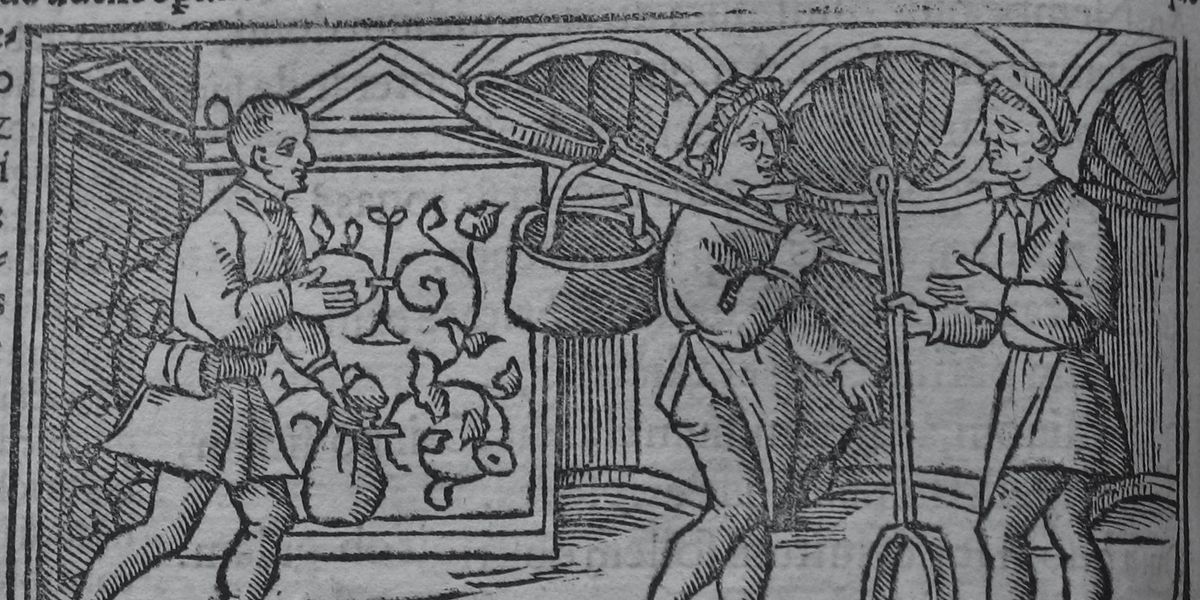 An edition of twenty plays of the ancient Roman dramatist Plautus, printed in Venice in August 1518, was for a long time the oldest book in the King’s School Library. With the others that have survived from the ‘old library’, it is now housed in a special bookcase at the St Augustine’s College site.

It is a large book of 754 pages and incorporates a commentary by Bernardo Saraceni and Giovanni Pietro Valla, first published in 1499. The publishers were Melchior Sessa (fl. 1505-1555) and Pietro Ravani (fl. 1516-1531). Sessa’s shop was ‘at the sign of the cat’ in San Giuliano, near St Mark’s Basilica, where most of the major Venetian printers lived and worked. The printer’s device, visible at the bottom of the strikingly colourful title page, is a cat holding a mouse in its mouth.

Plautus was very popular in Renaissance Italy and several editions of his plays were printed in the 1490s and early 1500s. One of the best known, also with the Saraceni and Valla commentary, was published in 1511 by Lazzaro de’ Soardi, a printer in Venice between 1490 and 1517. This was the first to be fully illustrated and included a full-page woodcut of a theatre that has been much reproduced.

There are over 70 woodcuts in the 1518 edition and they have been regarded as giving some idea of how the plays might have been presented on the stage. They usually name the characters, though most of the images were re-used numerous times to show different characters in different plays.

The illustration shown here is unique. Strobilus, Anthrax and Congrio are characters in Aulularia (The Little Pot, or The Pot of Gold). Strobilus is a slave, while Anthrax and Congrio are cooks and hence are shown carrying their utensils. As with many Plautus works Aulularia was to be adapted by later dramatists – most notably by the seventeenth-century French playwright Molière in his L’Avare.

Histories of the King’s School repeat the assertion that the Library was started by the Headmaster David Jones in 1702. There is no direct evidence for this statement, though later catalogues do record that the earliest books in the Library (Cooper’s Latin Dictionary and Marcus Aurelius’s Meditations) were presented in 1702. It was almost exclusively a classical library and it was not until 1834 that a separate ‘English Library’ of general literature was created.

There is an eighteenth-century manuscript catalogue of the collection. It starts with a record of donors and their gifts and then has a list of (presumably) all the books. As was not uncommon at this time, volumes were listed by size starting with the largest (‘folio’) then quarto, octavo and duodecimo. This is probably an indication of how the books were placed on the shelves. The page illustrated here has details of 23 of the ‘folio’ books, including the Plautus, and it is interesting to note that most were published on the continent, with only three from London and one from Oxford. It was not until the nineteenth century that books published in England would come to dominate the Library.

The Plautus was presented, along with four other books, on 16 June 1723 by Robert Jenkin. Born in 1656, he was at the School from 1667 to 1674 and went to St John’s College, Cambridge, where he became both Master and Lady Margaret Professor of Divinity in 1711. He died in 1727 and fuller details of his life can be seen in the Oxford Dictionary of National Biography. It is interesting to note that two other old boys, Henry Foche and Richard Monins, both then at St John’s, also presented books on the same day. Monins later became Headmaster.

Some 150 years later the Library acquired an older book. This was a 1480 edition of Suetonius, De Vita XII Caesarum (The Life of the Twelve Caesars), that had belonged to John Mitchinson, Headmaster from 1859 to 1873. This is very plainly printed with no illustrations and is less immediately appealing than the Plautus.