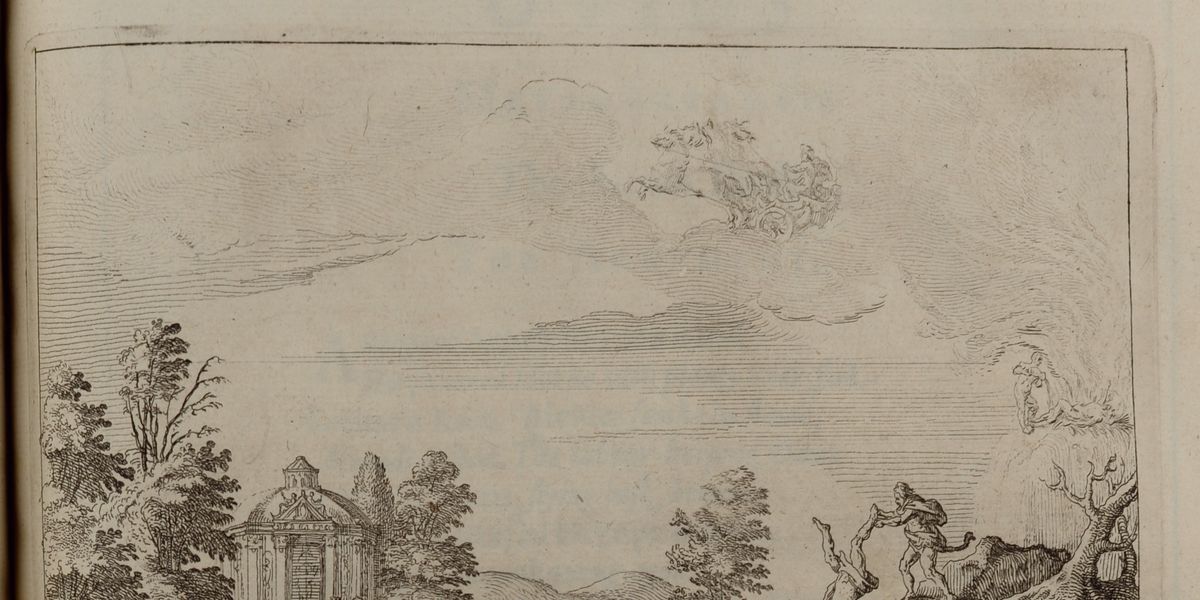 Getting through January can seem a Herculean task, so we hope that the following article gives you a helping hand. Best wishes for a Happy New Year, Karen and Jayne.

Ovid’s Metamorphosis Englished, mythologized and represented in figures. [with] an essay to the translation of Virgil’s Aeneis (Printed by J.L. for Andrew Hebb, 1640)

Welcome to the first image for ‘Picture this…’ 2016. Let’s go back in time to ancient Rome, the time of Ovid, a Roman poet who lived between 43 BC and 17 AD and who wrote one of the most well-known mythological texts: Metamorphoses. Metamorphoses has been translated into many languages, and illustrated with many wonderful and complex images. A luxurious printed book from 1640 contains 17 illustrated plates of beauty and depth that help bring the tales of Metamorphoses to life.  To choose just one image is a difficult task; however, this dynamic picture of the Labours of Hercules from Book IX is eye catching, vibrant and dynamic.

This full-page printed image is opposite the text for the ninth book, the contents of which, in digest form, are introduced thus:

There is a distinct correlation between text and image. The first line: A Serpent Achelous; now a Bull, is clearly represented in the lower third of the image, where Hercules straddles the bull from behind, wrenching the beast’s horns apart. The severed Horne refers to Hercules literally ripping the horns off the bull. The image shows the physical exertion of Hercules, muscles displayed as he de-horns the beast. Next to this is Hercules entwined with the serpent, heaving its mighty jaws apart. The scales of the snake almost shine, giving the slimy texture to this part of the image.

For those of us unfamiliar with the Labours of Hercules, the first task set to the demi-God was that of rescuing a woman held captive by the Nemean Lion. By tradition, Hercules is represented wearing the slaughtered beast’s skin in each ensuing physical depiction. The cloak is textured; the fur of the lion can be seen, as well as a foot dangling around Hercules’s shoulder, and the tail swinging behind.

This image of the bull and the serpent are in the centre of the bottom third of the picture, and the flow initiates from them. The scene then slides across the page to the base of the cliff to represent the next sentence: Lichas a Rock. Lichas was the messenger who bore the poison shirt of Nessus from Deianeira. As Ovid tells it, Lichas, huddled at the base of a cliff clinging to Hercules’ knees. The scene moves to the cliff top where the fear on Lichas’s face is obvious as he is launched off the cliff. Such expression highlights the skill and workmanship of this print. In order to incorporate this detail the artist would have needed to etch each detailed line back to front with the correct depth and precision.

The opening text continues with Alcides sunke in flame. The representation of this is harder to spot. Above the tree on the right hand edge, fire is being poured on a prostrate figure with the flames rising up and across the top of the page. The indented lines of the print are light and wavy making them hard to see. The flames move across the page to the pinnacle of the image where three horses are pulling a chariot across the sky. The figure in the back is Hercules; with his lion cape flying behind him (Alcides is an alternative name for Hercules). This part of the print has a sketch-like quality to it, very different from the clearly defined bottom images of the bull and serpent.

Left of the falling figure are three animated figures around a tree, but what takes a little more depth to see is that a figure is becoming part of the tree itself with arms held aloft melting into the bark and legs twirling into the roots: this is, Lotis flying lust, becomes a tree. Further to the left still, A Boy, to Isis paies his maiden Vow. A couple kneel in prayer before a temple.

Another figure that cannot be overlooked is the centaur riding away with his captured maiden. Hercules is there with his bow drawn. This is not represented in the beginning text but probably refers to the beautiful Deianire ‘the envi’’d hope of many: the desire of all that knew her,’ with whom Hercules was infatuated and who was abducted by a centaur.

Arguably, the most interesting parts of this image are not the large scenes at the base, where Herclues performs his labours, showing his strength and skill, but rather the smaller details hidden within the image. These details include the chariot racing across the sky and the figures on the right hand edge, hiding in the shadow of the cliff face. Above them is a tree sliding down the side of the rock with another couple, a prostrate figure being consumed by fire. It is these images that draw the eye around the print. It is such a busy scene, with immense detail, light and shading. Added to the dynamic image, you can see the centaur riding away at speed, see the fear on the face of Lichas, and see the strength in the figure of Hercules.

These details are possible due to the type of printing used. Intaglio printing is a method where lines are incised or etched onto copper or zinc plate. The depths of the lines carved into the metal determine how dark the ink will be on the print itself. The dark lines of Hercules’ cloak where he is battling the serpent would have been deeply etched into the plate, so that more ink could well there, creating a deeper, darker line. The top lines that look like moving clouds across the sky would have been shallower, with barely any ink touching the paper. Many of the lines are straight, causing a hatching effect that can be seen most clearly in the mounds and ridges of the ground. Even the trees and bushes appear to be moving in the wind, created using tiny half-moon shapes.  Some of the lines on the bull’s curly forelock and the serpent’s scales are little half-moons creating movement and texture. The etching of Hercules’ face shows his strength and determination.

Intaglio printing like this would have been a painstaking task, a true labour of Hercules.