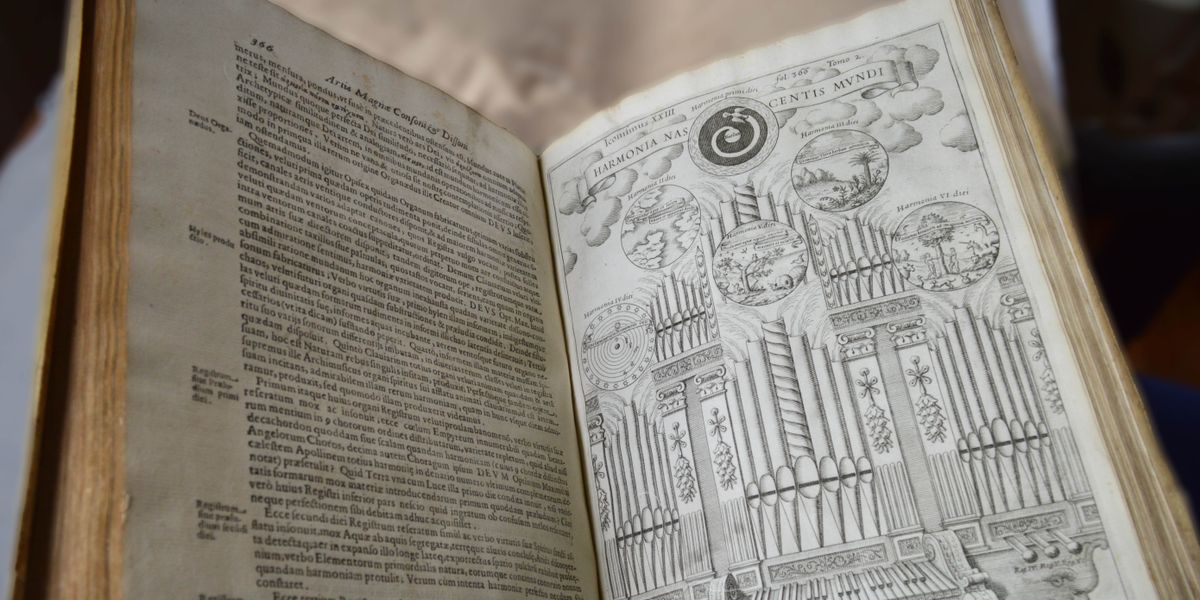 At some point on 22 February 1668 the English diarist Samuel Pepys paid the grand sum of 36s for a copy of the Musurgia Universalis (The Complete Science of Music), a grand musical encyclopaedia composed by the German Jesuit Athanasius Kircher (c.1602-1680). Pepys noted that he expected ‘to find great satisfaction’ in reading this work by one of Europe’s leading intellects. First printed in 1650, the Musurgia is a seminal work of early modern musicology that provides readers with a history of musical instrumentation, musings on the divine mystical nature of musical harmony, and textbook knowledge on sound theory and experimental methods.

Each copy was enriched by a dizzying array of engraved plates, musical scores and diagrammatic illustrations that accompany the ponderous Latin prose. From the many hundreds of possible images offered by this text, the above image stands out, and gets to the heart of why a Jesuit intellectual might have produced a text dedicated to music. The image, titled Harmonia Nascentis Mundi (The Harmony of the Birth of the World), appears in the tenth book of the Musurgia, which concerns the idea of universal harmony and the creation of the universe itself where the harmonic perfection of God was transmitted across the universe. To Kircher, then, the exploration and understanding of musical theory was a path towards a greater understanding of the Divine.

In this rendering, the music of creation is visualised through a grand baroque pipe organ, whose six register cosmological keyboard corresponds with the six days of creation described in the Book of Genesis. Each day of creation is depicted emerging from a specific heptachord register, the product of the Almighty’s Divine harmony. At the apex of the six spheres is a representation of the Holy Ghost, depicted as a dove, spreading light through the darkness.

Musurgia presents the musical origins of the universe as intrinsic in all of creation, as a natural harmony between the physical animal and human worlds with the music of the spheres and the Great Divine. Such a theory is embodied in the legend beneath the keyboard which reads: ‘Sic ludit in orbe terrarum aeterna Dei Sapientia’ (thus plays the wisdom of the everlasting God in the earthly orb).

The Musurgia’s exposition of the theory of Divine Harmony was by no means new, dating back to Greco-Roman precedents which regained prominence in early modern intellectual circles. In Kircher’s depiction of the organ of creation we can also identify traces of the distinctly medieval view that music itself, in its ratios and harmonies, could reveal secrets of the cosmos and of God’s Harmony. This handsome engraving, then, is a fitting addition for the Musurgia, a piece of true musicology that went on to influence the music of Johann Sebastian Bach a few decades later.

Kircher might have been the last man who knew everything; or he may have been a crackpot who built a career upon smoke-and-mirrors experiments. After taking his place at the head of the Jesuit Collagio Romano in Rome, he became internationally famous for grandiose feats of ‘scientific’ showmanship and the building of mechanical gewgaws (a useless showy thing), but he was also a bold and brilliant intellect with a flair for the magia artificalis. This book and accompanying image stand as testament to this legacy, well worth the 36s that Pepys paid for his edition.

John Glassie, A Man of Misconceptions: The Life of an Eccentric in an Age of Change (Penguin, 2012)