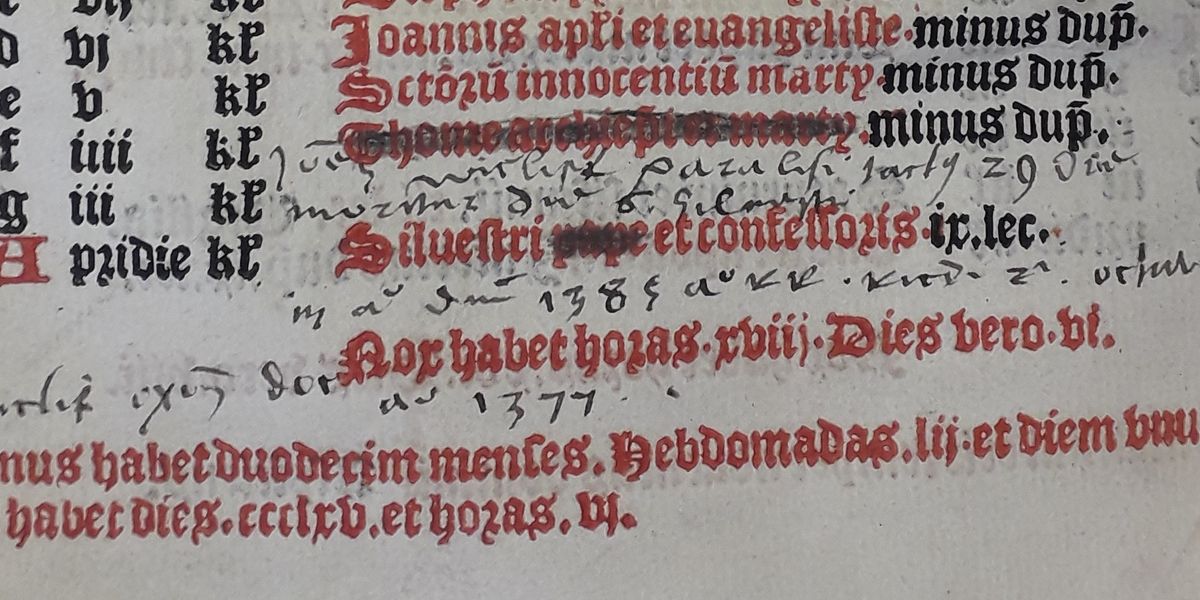 Thomas Becket’s martyrdom and subsequent canonisation led to this venerated Archbishop of Canterbury being commemorated annually on the anniversary of his murder at Canterbury Cathedral on 29th December 1170. This image is the December calendar page of a breviary, printed in Paris by Francois Regnault, published in 1535. During the early sixteenth century, many of these portable French breviaries were intended for the English market. Breviaries were important for enabling individuals to follow the daily psalms, hymns, prayers and lessons for specific days during the year in accordance with the Sarum Rite (the liturgy developed at Salisbury Cathedral which was widely used in the medieval church). This volume may well have belonged to one of the clerics responsible for performing the Daily Office in England in the 1530s. Breviaries in this format continued to be used in the English Church beyond the break with the Roman Catholic Church under Henry VIII, until their replacement by the Book of Common Prayer in 1549.

This volume is printed in black and red, with numerous marginalia, glosses and deletions. The eye is naturally drawn to the lower part of this page where there are both deletions and interlinear glosses. The most noticeable deletion is that for 29th December: ‘Thome archiepis[copi] marty[r]’. The date of the anniversary of St Thomas of Canterbury’s martyrdom has been erased. Note also the papal title ‘pape’ has been removed in the entry for St Silvester on 31st December, which was a much-celebrated feast day in the English Church.

The English Reformation of Henry VIII, co-engineered by Thomas Cromwell, was in full swing when this book was printed in France. The first Act of Supremacy in 1534 was the catalyst for the break from Rome. Note that this volume was therefore acquired by its first owner after this date. Anyone or anything that symbolised papal authority was now anathema to Henry, particularly a saint who had dared to commit traitorous acts against his own ancestor Henry II. In November 1538 a Royal Proclamation effectively ‘unsainted’ Thomas:

‘Therefore his Grace strayghtly chargeth and commandeth that from henseforth the sayde Thomas Becket shall not be estemed, named, reputed, nor called a sayncte, but bysshop Becket; and that his ymages and pictures, through the hole realme, shall be putte downe, and avoyded out of all churches, chapelles, and other places; and that from henseforthe, the dayes used to be festivall in his name shall not be observed, nor the service, office, antiphoners, colletes, and prayers, in his name redde, but rased and put out of all the bokes.’

This portable breviary was probably in the possession of an English person or group, most likely a secular priest from 1538 onwards as, in demonstrable obedience to this proclamation, the owner of this volume has struck through, with a thick line, the entry for 29th December. Elsewhere in the volume there are many alterations; of specific note is a faint line through the entry for the Translation of St Thomas on 7th July. Curiously only the name is struck through in the entry for the following Sunday: ‘D[om]inica prima post festum transla. Sancti Tho[mas]’, perhaps demonstrating less enthusiasm for Henry’s Proclamation than the King envisaged. Similarly, there are diamond-shaped cross-hatchings through the pages entitled in Latin ‘Thomas archbishop and martyr’, although so ineffective that the text can be read in its entirety.

Near these July entries are two handwritten notes in the margin. The first begins with the date 1536 and appears to be an obit of a death, but the full details are unclear; the other note on the same page ends with the date 1565. Both are written in early sixteenth-century hands, possibly by different people. The notes on subsequent pages for October and December are written in two other hands, suggesting either a shared use of this book, or a change of ownership.

Returning to the December calendar page, in direct contrast to the attempted eradication of St Thomas the Martyr, there is a interlinear note recalling that John Wiclif (Wycliffe) died on the Feast of St Silvester in 1385, and a further reference to the year 1377, a year in which Wycliffe had five papal bulls issued against him. This suggests that the book may, at some time, have been in the hands of someone with sympathies with Wycliffe, who was an English religious reformer, in opposition to official Church teaching and practice. Whether the person who added the notes relating to Wycliffe was the same person responsible for erasing Thomas Becket in accordance with Henry’s Proclamation, although feasible, is not a certainty.

The gloss on October’s calendar is a commemoration of St Wilfrid, Archbishop of York in the seventh century. His feast day is 12th October, which was not included in this breviary’s calendar. St Wilfrid founded an early monastery in Ripon in the 660s. It is known that he died in 709, although the person who added this annotation gives 693 for his death. St Wilfrid’s relics were removed to Canterbury from Ripon shortly after 948. His shrine in Canterbury Cathedral became a magnet for pilgrims before Becket’s even stronger attraction.

The Henrician Reformation was responsible for removing celebration of St Thomas Becket from the religious practices of this nation; however, we still remember this most English of saints in the twenty-first century.

Just a few pages of this breviary provide evidence for the effect of the English Reformation, personal tributes to Wycliffe and St Wilfrid, day-to-day use of a book by more than one owner and above all the failure to expunge St Thomas Becket from perpetual memory.