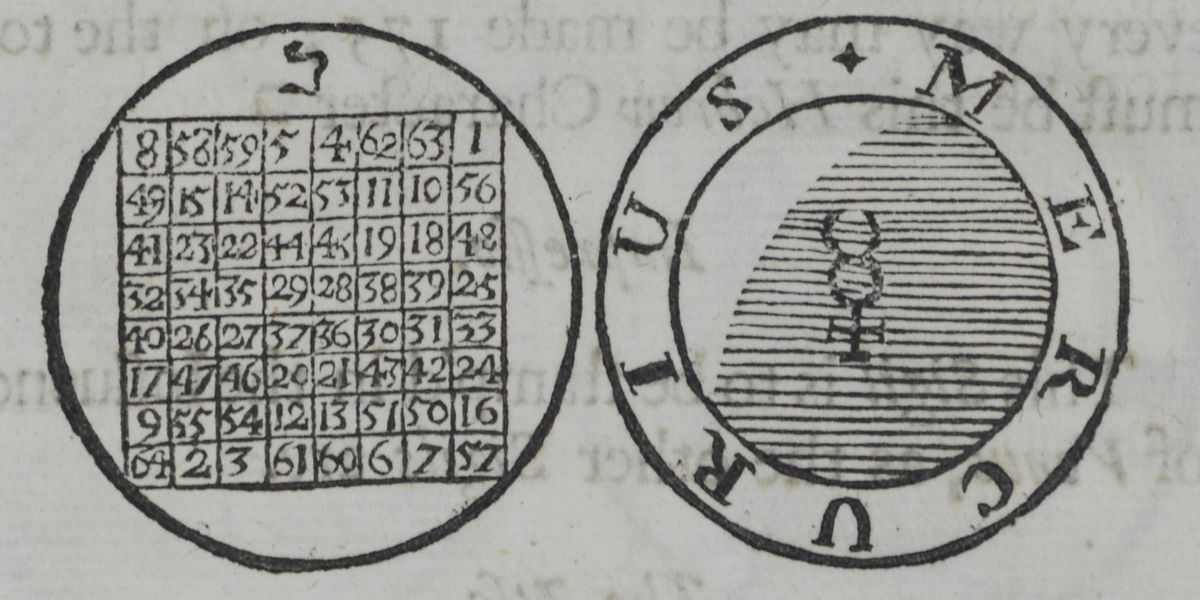 Author: Anna Hegland, PhD candidate at the University of Kent

From star charts and gemstones to herbal cures for stinking breath, this month’s Picture This explores a scientific and medical book whose translated title is The Mystery of Seals (Elham 1256). While traditional herbals (like John Gerard’s The herball : or generall historie of plantes or William Turner’s  A new herball) were popular for the botanical knowledge they catalogued, this text focuses on the relationships between animal, vegetable, and mineral. Originally published in Germany in 1651 by Israel Hibner, a professor of mathematics in Erfurt, Germany, the book was translated into English in 1698 by a ‘Mister B. Clayton’. It is this English translation that has made its way into the library at Canterbury Cathedral.

According to the publisher, W. Downing, this pocket-sized book was meant to remind readers of the ‘Vertues [sic] and Influences’ of the stars, and ’how readily to apply them to the necessities of Mankind’. The nearly 200-page text includes an index of plants, from herbs and vegetables to flowers and trees, and a list of precious stones and metals which are meant to be combined to help cure various illnesses.

The detail of the two printed diagrams above is just one example of the remedies described in this book. The diagrams depict the two sides of the sigil (an inscribed or painted seal) of Mercury, the planet which rules the month of June in astrological calendars and star charts, and includes the mathematical grid and particular characters (in Hebrew and English) that users are instructed to include on their own homemade sigils. Beneath these images is a full ‘recipe’ that tells readers how to make this sigil, using materials like leather, distilled vinegar, and ‘a clean, wooden bowl’.

The sigil must be stamped before it can be used, but the translator, Mr. Clayton, is clear that this can only happen at very specific times. Earlier in the book, calendars are provided so that readers can ensure their sigils, stones, and remedies will be effective. In June 1698, for instance, sigils with the stamp of Mercury could only be finished on the 20th and 22nd of the month, at ‘7 minutes past 11 in the morn’ and ‘59 minutes past 10 in the morn’, when the planet was in the ascendant. Once the sigil has been stamped, we are told it can be carried in a ‘purple silk bag, and hang’d about the neck’ and used to preserve from and cure all diseases influenced by Mercury.

How do you know if you’re suffering from an illness governed by Mercury? The Mystery of Seals also features a helpful list of ailments from which you can diagnose yourself. Mercury’s diseases range from minor to serious — from lethargy to memory loss and other brain conditions. Sometimes multiple planets can jointly influence the body; when Mars and Venus converge (the ruling planets for April and May respectively) they can cause blisters, warts, and stinking breath!

Those suffering from these conditions are advised not to worry, as ‘there is no speedier means of curing these maladies than by the herbs, roots, and seeds’ gathered while the ruling planet is visible. Each of the seven planets recognized in the seventeenth century gets a similar section devoted to its herbs, stones, and sigil.

Although this herbal does not include images of specific plants, instead prioritizing the sigil diagrams, the Cathedral collections contain a number of other herbals from across the medieval and Early Modern periods. These herbals are full of images of English flowers, fruit, and trees in mediums ranging from more rough-cut wood block stamps to detailed copper engraving plates. All of the greenery listed in The Mystery of Seals, including images of apricot trees (Malus Armeniaca) and lilies, can be found in herbals like those by John Gerard (1545-1612), William Turner (1508-1568), and Pietro Andrea Mattioli (1501-1577) (listed in the further reading section below).

The Mystery of Seals provides a unique insight into some of the scientific and medical knowledge that was studied and debated in seventeenth century Europe. Its translation into English speaks to the popularity of the text, and perhaps its use in the middle- and upper-class households who had better access to the range of materials it lists. While today’s pharmacists and doctors avoid prescribing planetary sigils, the plant-based knowledge found in this book gives a glimpse of the home remedies used in and around London and Kent in the Early Modern period.

John Gerard, The herball : or generall historie of plantes. Gathered by John Gerarde … Very much enlarged and amended by Thomas Johnson … (1663) [W/A-6-31]