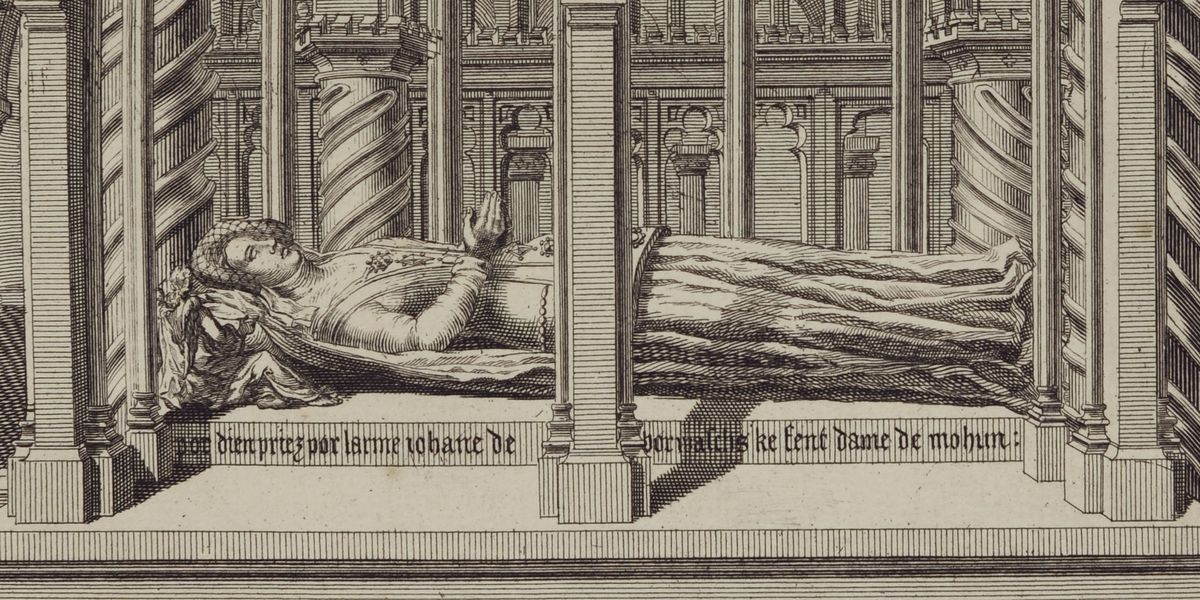 Some of the chief joys of John Dart’s The History and Antiquities of the Cathedral Church of Canterbury (1726) are the engravings. This depiction of Joan de Mohun’s tomb reveals details which have since been lost. In the

engraving, the slender tracery allows a profile view of the alabaster effigial tomb. The figure faces to the East, and towards the altar of the Virgin Mary in the Undercroft, to which she prays.

Now Joan de Mohun’s effigy reveals substantial damage. Her face is largely obliterated and her arms are missing – even the head of her dog at her feet has gone. This damage seems to have occurred in the eighteenth century, for Edward Hasted records in 1800 that:

On the south side of this chapel, close to the outside of it, there is a handsome monument for Joane, daughter of Bartholomew de Burgherst, lady Mohun, prepared and set up at her own cost; on the tomb is her figure, lying at full length; the inscription in French, being por dieu priez por l’ame Johane Burwaschs que fut Dame de Mohun; but this has, as well as the rest of the monuments in this part of the undercroft, been from time to time much defaced by the carelessness of the workmen belonging to the church, who make this place the common repository for their materials, ladders and other such like unwieldy lumber; of course it is suffered to remain in a very filthy condition.

Yet her tomb in 1726 was outstandingly lovely. Moreover, Lady Joan de Mohun (died 1404) was both a feted and accomplished courtier, born into the noble and wealthy Burghersh family of Kent. Both her husband John de Mohun, Lord of Dunster, and her brother Bartholomew Burghersh were founding members of the Black Prince’s Order of the Garter.

What is less well-known is that Joan and her daughter Philippa too were members of the Order. Rather than simply wearing the livery of the Garter and attending the ceremonies for Garter members, there is some evidence that female members also swore chivalric oaths, including promising to pay up to half their dowries to ransom their husbands and sons.

However, it was not just her closeness to the Black Prince which permitted her tomb to be placed in the Undercroft with her own Chantry, as recorded by Dart. As Margaret Sparks notes in her book on the Cathedral Precincts, Joan had assisted in raising money for the rebuilding of the Nave of the Cathedral. Her heraldic crest also adorns the east alley of the Cloister.

Dart’s History provides a depiction of a ‘Monument of Marble with Antique Arches and Spires’ more fitting to this Lady of the Garter than perhaps would be realised by visiting the tomb today.  For another indication of the beauty of the tomb, the Cathedral Library also holds a copy of Stothard’s nineteenth-century engravings of funeral monuments. This volume shows part of Lady de Mohun’s court dress (her cote-hardi or sleeveless open-sided top) was of yellow patterned brocade with jewelled buttons. Yet it is Dart whose engravings demonstrate most clearly the beauty of Lady de Mohun’s tomb.

John Dart, The History and Antiquities of the Cathedral Church of Canterbury (Westminster: 1726)

Edward Hasted, ‘Monuments in the cathedral’, The History and Topographical Survey of the County of Kent: Volume 11 (1800)