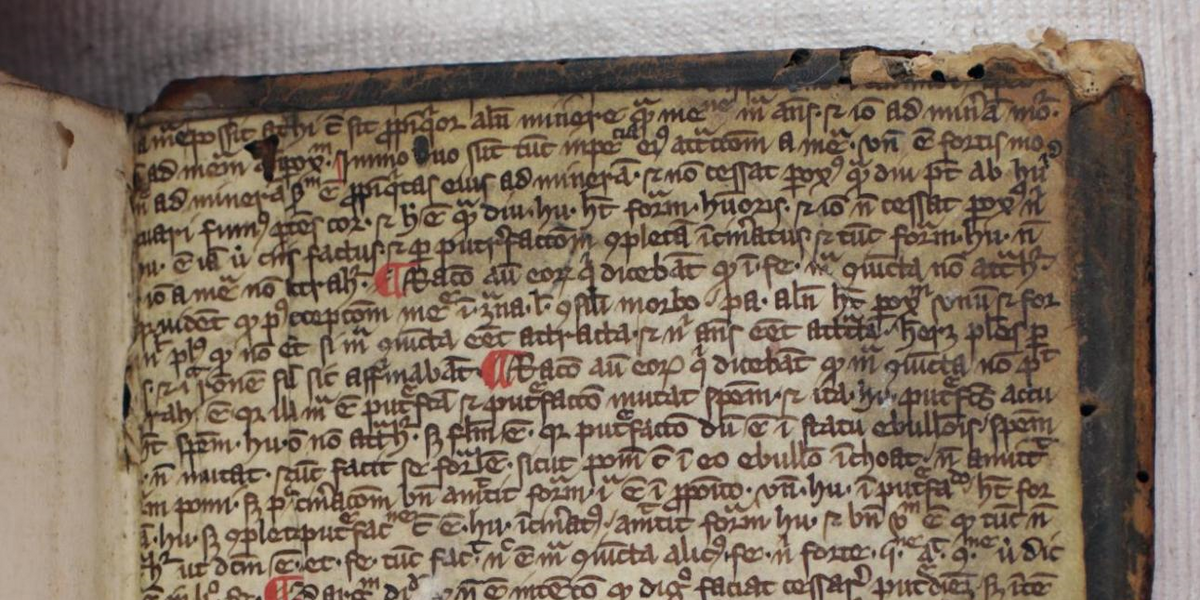 Try to forget your mental image of a bookshop – erase the thought of shelves and of colourful covers. In the early seventeenth century, when you went to buy a book, you would not have seen them in serried ranks or, indeed, in bindings. You would have asked the person running the shop for the book you wanted and it would appear either in rolled sheets or in gatherings lightly tied together. The shopkeeper would ask you whether you would also like it to be bound — because the bookseller was also the binder. You would then discuss what type of binding you would like: if you had the money, it would be one of leather over boards, with a pattern stamped onto the front and back. The book which we are looking at today is the result of that sort of discussion in the bookshop.

It is a small, thick volume, an edition with commentary of the Itinerarium Antonini, a classical work describing the roads of the Roman Empire and the towns on their routes. Fittingly for this text, the book itself went on a journey. It was published in 1600 in ‘Colonia Agrippina’, which is now known as Köln or Cologne, but the copy soon crossed the Channel and was imported into England. We know this because of its binding: the leather is stamped with a large centrepiece and the work of Neil Ker in the mid-twentieth century and of David Pearson early in this millennium enables us to identify not just where this binding was made but by whom.

It was added to the paper gatherings that make up the book in Oxford by the binder Roger Barnes. He had been active for about ten years by the time this book was published, at first trading alongside his brother, Joseph. He was used by the university and the colleges in that city as a bookseller and a binder.

What makes Barnes’s work on this book particularly interesting lies on the inside of the covers. It had been a frequent practice in Oxford, as in some other towns, in the sixteenth century to line the insides of the binding with ‘waste’ material: that is, instead of pasting down virgin parchment or paper (and so called ‘pastedowns), employing for the same purpose bits which had previously been used in another book. The reason for this practice is the glut of old books which were thrown out in the sixteenth century — be it because they were outdated in terms of technology or under suspicion because of their religious content — and were available as scrap to be pulled apart and put to more menial tasks. Indeed, their presence in bindings was not the only or the most lowly re-use to which they were put: it is said that some were used to wrap gloves or soap or meat, while others ended up applied to learned backsides in Oxford’s toilets. None of those, unsurprisingly, survive so the fragments that were employed by binders are precious survivals.

The books which were pulled apart and re-deployed in these ways were usually manuscripts from the previous centuries, though by the early seventeenth century, when the book we are discussing was bound, the supply must have already decreased substantially. The volume, though, does have one pastedown which is on parchment and hand-written: it appears at the back board and the script, as you will see, is cramped with little space between the lines, giving the impression that it was a scholar’s copy.

It is from the early fourteenth century, and the text, with its discussion of humours and putrefaction, is clearly a medieval medical work — considering its rapidly written script, it might be less remarkable that it was discarded than that it survived long enough to be torn apart no less than three hundred years after its creation.

It was fairly common for both pastedowns in a binding to come from the same book but this Itinerarium is an exception to that practice. Turn to the front and we find something rather different: look closely and you will see that this is not hand-written but instead printed.

This is, in fact, witness to a printing produced within the first two decades of that technology’s presence in Europe. We can identify the publication from which it comes: it is an edition of Cicero’s classic De officiis, printed in the city which was the birthplace of the new technology, Mainz, in 1466.

What we are seeing, then, is evidence of the truism that the making of books in the early modern period often involve the breaking up of other books. This single volume is witness to three books — the printed text thought worthy of receiving these covers, and two older books which had, as we might put it, passed their shelf-life. The books which were available for pulling apart were various: they might be manuscripts of outdated knowledge or they could be of texts like the Cicero which was highly regarded enough to be one of the earliest works printed but those editions had been superseded by more recent ones.

We can add a little more information to this story. A binder like Roger Barnes is unlikely to have had only a few scraps from each book which he re-used. Instead, he had full volumes which he dismantled. That means that each discarded manuscript or early printed book would have served to furnish several new bindings. Scholars nowadays live in the hope of being able to reconstruct the lost book by locating a number of fragments in different bindings, often dispersed across multiple libraries. In the case of the early printed Cicero reused by Barnes, another small fragment from the same copy has recently been identified: it is well looked after in private hands. That fragment is detached from the binding in which it sat — so, in this case, fortunes have been reversed and what the binder considered to be waste is the only part to survive. The fragment does, though, contain some evidence of its history, because it has two holes near one corner, signs that the volume in which it was used once had a chain attached to it, as did many books which went into institutional libraries. What is more, the placing of those holes is consistent with the chaining used in one specific institution — Magdalen College, Oxford, for which Roger Barnes did much work at the end of the first decade and start of the second decade of the seventeenth century.

That other fragment, then, can help us date a little more closely the binding on the Itinerarium Antonini now in Canterbury Cathedral: we can surmise that it was provided, probably (given the lack of chaining) for a private owner, around the year 1610. We should finish, though, by returning to the other fragment Barnes used for it reminds us of a sobering fact. No other element from the medical manuscript from which it has been taken has yet been identified — and this, in fact, is more typical than the situation with the Cicero. For each discarded book from which more than one fragment survives, there are several where the single scrap is the lone element not to have been destroyed. We should not blame the binder for that situation: Roger Barnes probably pasted several leaves from it into a range of books, but the process of killing off books of which he was part certainly did not die with him.

The manuscript fragment is recorded in Neil Ker, Pastedowns in Oxford Bindings (Oxford, 1954 [reprinted 2004]), no. 1486, now available on POxBo on the Lost Manuscripts website: https://www.lostmss.org.uk/ker/fragments/1486-medicine

The printed fragment is from ISTC ic00576000: https://data.cerl.org/istc/ic00576000. It has been studied by David Shaw. For more of his research on printed fragments in Canterbury Cathedral Archives, see https://docs.djshaw.co.uk/CCA_AddMs_127/AddMs%20127.htm