John Dart and the Trinity and Corona Chapels 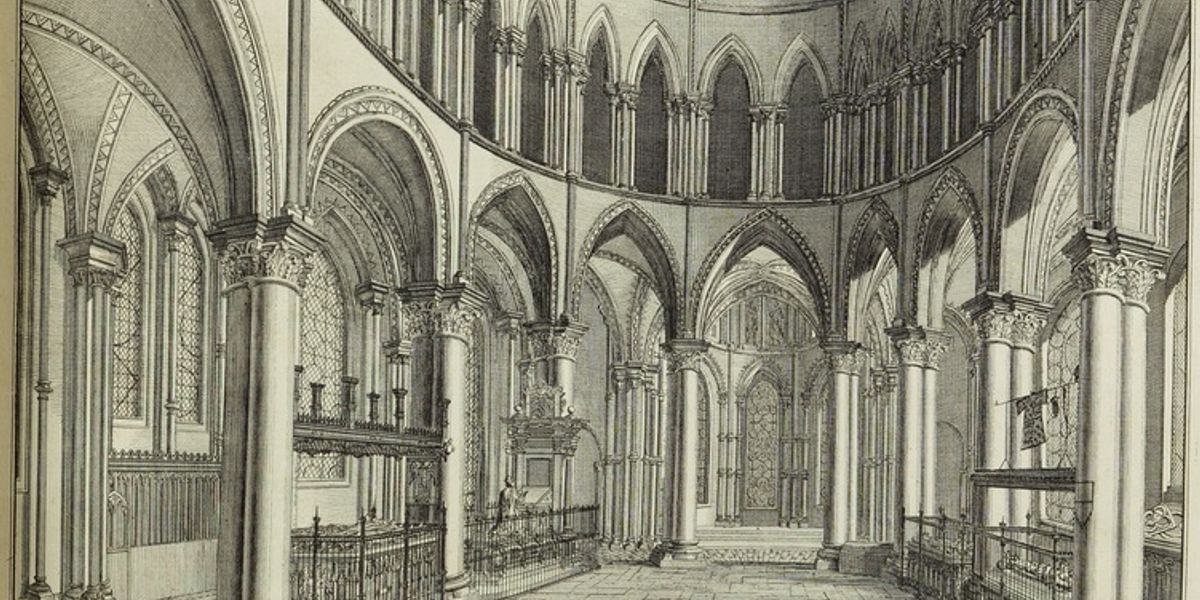 The most memorable aspect of the volume by John Dart (d. 1730) called The History and Antiquities of the Cathedral Church of Canterbury (1726) is the detailed engravings created by James Cole. These illustrate a variety of locations within Canterbury Cathedral. This particular engraving depicts both the Trinity and Corona Chapels, including the space once occupied by the shrine to which St Thomas Becket’s remains were translated on 7th July 1220. Cole’s engraving shows a view of the chapels which is not dissimilar from today’s.

The Trinity and Corona Chapels were constructed between 1175 and 1184. They replaced a much smaller chapel which was destroyed by fire along with much of the quire in 1174.  In 1220, Becket’s remains were translated from their previous location in the crypt to a magnificent shrine in the Trinity Chapel, which attracted thousands of pilgrims until its destruction under Henry VIII in 1538. We can clearly see this area within the engraving. The engraving signifies to the viewer the absence of a previous shrine by drawing the eye to the empty space. The caption to the engraving also makes reference to the former shrine. The engraving also emphasises the sheer size of the Trinity Chapel, allowing the imagination to conjure up the magnitude of Becket’s shrine which once inhabited the space.

The second thing we notice when looking at this engraving is the similarity of the scene to that seen today. One of the most obvious features is the intricate flooring placed in front of the site of Becket’s shrine. The main centre portion of this pavement is known as the Opus Alexandrinum, which is surrounded by 36 roundels (18 on either side) depicting the signs of the zodiac, the labours of the months, and the seven virtues and vices, as well as mythological beasts. It has been suggested that it was originally laid elsewhere in the cathedral between c.1182-1184 and then moved to the new site of Becket’s shrine, the Trinity Chapel, between c.1213-1220. The layout of this pavement underwent several developments before reaching its current position. However, the final layout was probably determined sometime between 1703 and 1726, as it is shown in the engraving.

Another development in the Trinity Chapel after its completion was the construction and installation of several tombs. One of the most significant of these is that of the Black Prince, Edward of Woodstock, the eldest son of Edward III, which was placed on the south side of the chapel in 1376. It can be clearly seen in the engraving, with the ‘achievements’ of the prince handing over the tomb. The achievements above the prince’s tomb are now replicas; the originals are due to be displayed in a new display area within the crypt. During the Civil War, the Puritans targeted the tomb, resulting in the loss of the sword, as well as the removal of jewels from the tomb and of a dagger from the effigy.

On the north side of the Trinity Chapel is the tomb of King Henry IV (d. 1413) and his second wife, Joan of Navarre (d. 1437). The white marble effigies of the king and queen are crowned and dressed in their ceremonial robes and can just be made out within the engraving. Another of the areas clearly displayed is the Corona Chapel, which lies at the very top of the engraving. It is thought that this chapel was built to house the relic of Thomas Becket’s crown (the top of his head). Outlines of stained glass designs can just be seen within the Corona Chapel and the engraving manages to display the great size of these windows.

With the fine detail of the engravings in Dart’s work, one can appreciate clearly aspects of the cathedral that have not changed for hundreds of years, remaining the same even today.