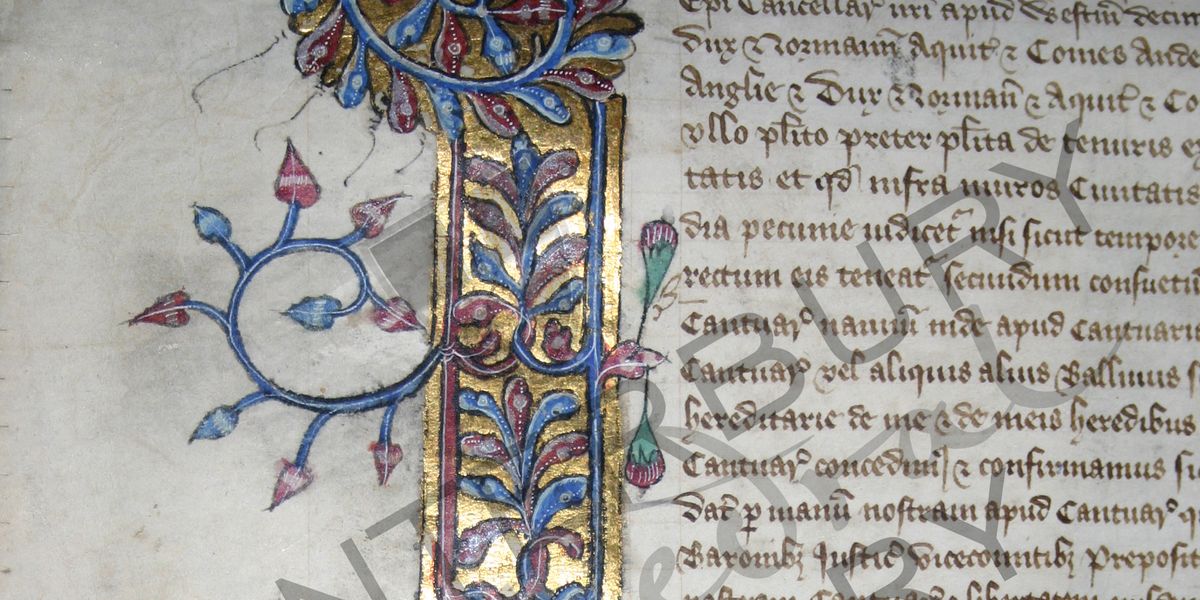 Richard II’s charter of 8 February 1380 (CC A/A/12) is an interestingly decorated document confirming the freedoms and obligations conferred upon the city of Canterbury by previous charters. What is particular about this charter from the archive of Canterbury City, held at the Cathedral Archives, is that it has been thought to be the first occurrence of the city’s own arms depicting a lion above three birds, thought to be Cornish choughs, often called beckets because of their long beaks. People with long noses were sometimes called ‘becket’ from before Thomas’ time. There is also a representation on the upper border of a shield with the cross of St George. Unusually for this period it is decorated on three sides, reflecting its importance to Canterbury. Cities paid to have their charters illuminated, usually raising a charter tax to do so, but there is no surviving record in the city’s records of payment for illumination in this case.

The 1380 charter measures 72.5cm by 45cm and is written on a single membrane of parchment with Richard II’s 11.5 cm diameter seal attached. The initial letter ‘R’ is illuminated and contains the royal arms. The colours used are gold, blue and red. These elements are of good rather than top quality, in contrast to the crudely painted city arms and shield. The borders show leaf and flower motifs on a gold ground, and the upper border and that on the right are historiated with faces peering out of the foliage. Among the witnesses are the king’s uncle and regent, John of Gaunt (the king was 13) and Archbishop Simon Sudbury, a year before his summary execution in the Peasants’ Revolt. The name of the chancery clerk, Simon Gaunstedt, who drew up the charter, appears bottom right.

No other surviving charters of this date are known to show either a borough’s own arms or the cross of St George. The arms of St George were associated with Richard II and appear on the Wilton Diptych (c.1395-1399) but there are no other known examples of them being used as a separate feature on a royal charter during his reign. The shield and the city arms have something in common: they are both very badly painted. Interestingly, the city arms are shown in mirror-image, with the lion and choughs facing right, rather than left, the correct direction in heraldry. It has been suggested by Elizabeth Danbury and James Lloyd that they may have been copied from a seal matrix, which would explain why they are in reverse. Like with a printing block, the elements on a seal matrix, including writing, are back to front in order that the wax impression of the seal itself should read and look correctly. Before the Reformation, the seal of the city of Canterbury showed a representation of the city on one side and Becket’s martyrdom on the other. In 1538, Thomas Cromwell ordered the destruction of Becket’s shrine in Canterbury Cathedral and of all images of the saint. Will Oldfield was paid 2s 8d to remove the martyrdom scene from Canterbury’s corporate seal and replace it with the arms showing the lion and three black birds. Did Canterbury wish to preserve a Becket connection? The present arms were not registered at the College of Heralds until 1619.

The Canterbury arms on the charter strongly resemble the post-Reformation seal matrix used in a seal press and on display at the Canterbury Heritage Museum. The museum also holds a much smaller, undated ivory seal showing the same city arms. There are traces of red (sealing wax?) on it indicating that it was used to seal letters and lesser documents. It is in a cabinet of Tudor artifacts in keeping with the known date of the remade, larger seal matrix, although the British Museum Catalogue of Seals (Walter de Gray Birch, 1887) suggests 15th century.

As a matter of context, there are charters for other cities from this time varying greatly in appearance. The most elaborately illuminated is Shrewsbury’s city charter of 1389 where a large initial contains a portrait of Richard II, crowned and robed, kneeling before his queen, Anne of Bohemia, and presenting her with the charter. Bath’s city charter of 1382 has a large, highly decorated initial in blue, gold and red but no other decoration except high featherlike ‘risers’ in red along the top line. Norwich’s charter of 1378, although the decoration appears complicated, has an unfinished appearance with no ‘R’ in ‘Rex’ A general pardon for the citizens of York, dated 1382 and relating to the Peasants’ Revolt of the previous year is not illuminated but space was left for an initial. This was not uncommon: it is not known why from the mid-13th century until the end of the 14th century the king’s chancery often omitted the first letter of a royal charter with the expectation that it would be decorated elsewhere. Boroughs and others were thus able to arrange the decoration of their charters to reflect the status of the content if they wished.

The 1380 charter is the first of five from Richard II’s reign surviving in the Canterbury City collection. The charters dated 1388 (CC A/A/13) and 1391 (CC A/A/14) confirm that the maintenance of the King’s Bridge was the responsibility of the Hospital of St Thomas and not the citizens of Canterbury. The 1388 charter has no decoration beyond looped letters and ascenders on the first line. The other has the initial ‘R’ decorated with a simple red, blue and gold diaper pattern. The fourth charter (CC A/A/15) of 1395 is the first grant of murage for repair of the city walls and is undecorated. The last charter (CC A/A/16) of 1395 deals with the city’s liberties and is also undecorated, although there is an outline in preparation for decoration of the initial ‘R’ and the capitals in the first line are missing.

In summation, the poor quality of the representation of the Canterbury arms on the 1380 charter, its incorrect orientation, some evidence of ‘tampering’ with the original decoration, and the fact that otherwise references to the city’s arms start in the 16th century suggest that the arms were added at a later date – possibly at a much later date. The shield with the cross of St George is of even poorer quality and the cross was seemingly not used on royal charters in the 14th century. Every known reference to Canterbury’s present arms being used in the Middle Ages cites the 1380 charter as evidence and there are apparently no further pre-Reformation references; is Richard II’s 1380 charter all it seems?

Mary Berg, Patron of the Friends of MEMS at the University of Kent
Editor: Jayne Wackett, MEMS