A Famous Image of a Shrine and Thomas Becket 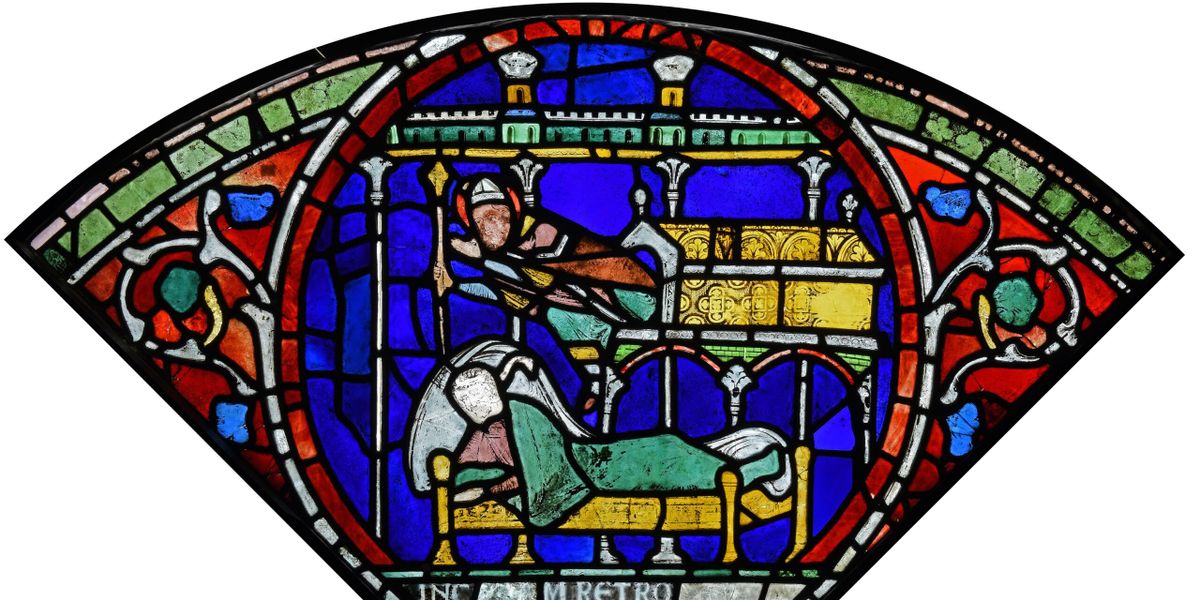 In the foreground, an ill man lies in bed. In the background, St Thomas Becket, wearing a mitre and holding a staff, shoots out of a shrine, almost as if he is being shot out of a cannon.

This remarkable stained glass panel is found at the very top of one of the miracle windows in Canterbury Cathedral’s Trinity Chapel. It dates to the early thirteenth century. This is the same time period when Becket’s remains were transferred from a tomb in the cathedral’s crypt, where he had been hastily interred shortly after his murder in 1170, to a spectacular shrine in the Trinity Chapel. That movement of Becket’s relics, termed a ‘translation’, happened 800 years ago this month, on 7th July 1220. Thousands of pilgrims, including King Henry III and many dignitaries, came to Canterbury to celebrate the translation, their revels aided by the free wine Archbishop Stephen Langton ordered to be available at the gates of the city.

Becket’s magnificent shrine remained the goal of Canterbury pilgrims until 1538. In that year, Henry VIII ordered it to be dismantled and Becket’s remains dispersed and destroyed. Henry VIII’s men did their job so thoroughly that only small fragments of marble from the shrine’s base are known to survive today.

What did that shrine look like? We have multiple written descriptions of it, many of them marvelling about the number of jewels that covered its surface. Visual depictions of it, though, are much more scarce and unsatisfying.

the ill man and Becket coming out of a shrine. He was convinced that he had found what had seemed so elusive: a depiction of Becket’s Trinity Chapel shrine. In a passage appended to Arthur Stanley’s very popular Historical Memorials of Canterbury, Austin enthused that the stained glass image ‘without doubt represents the main features of the Shrine faithfully’ and that ‘this representation is the more valuable as being the only one known to exist’.

Unfortunately for this attractive idea, scholars have since concluded that the shrine depicted on the panel is not a representation of Becket’s Trinity Chapel shrine. As beautiful as it is, the shrine on the panel does not match the grandeur of the written descriptions of Becket’s shrine. The most accurate medieval representation of Becket’s shrine that we have is not this glass image, but rather a pilgrim’s badge dating to the fourteenth or fifteenth century. This badge would have been purchased as a souvenir of a pilgrimage to Canterbury and worn clipped to a pilgrim’s hat. To see an example, click here.

What, then, does the stained glass panel represent? Like the rest of the surviving glass in the Trinity Chapel, it was designed to tell a story of one of Becket’s early miracles. In this case, it seems to have been a combination of the stories concerning an ill cleric named Philip of Alnwick and his son, John. Philip had two problems, one rather gruesome: he had painful feet, and greatly swollen genitals. John also had two problems: he had a headache and his body was covered with pustules. Both father and son had a vision of Becket, after which they were healed. Philip’s vision was described in detail by the monk and writer Benedict of Peterborough: ‘[Philip] thought he was lying in a church near the shrines of two saints. The blessed and glorious martyr Thomas rose from one of the shrines and spoke to him, saying: “Philip, you saw me, and you loved me very much when I lived in the world”’. (For the full text of the two stories, see the appendix below).

The glaziers were depicting a shrine seen in a vision, not ‘THE’ shrine. But this need not be disappointing. The artist who designed this panel gave us something more historically important than a representation of Becket’s shrine. He pictured for us what medieval people thought about the power, effectiveness, and energy of the dead archbishop. Becket was seen as a saint and his relics were translated 800 years ago this month because people believed in that power and felt themselves healed by it. This wonderfully dynamic and memorable image gives us precious insight into that long-ago world.

Appendix: The stories of Philip of Alnwick and his son John found in Benedict of Peterborough, Miracula S. Thomae, ed. by J. C. Robertson (London, 1876), book IV, chapters 24-25, pp. 201-202 (translation by the author, all rights reserved).

Concerning Philip of Alnwick, whose genitals had swelled up

A clerk of Alnwick named Philip suffered with the detriment of two infirmities: a dangerous debility of the feet and a dreadful inflammation of the genitals. The second illness had brought him to despair of his life, and the twin pain fixed him to his bed. When the doctors despaired of him, he fell asleep. He thought he was lying in a church near the shrines of two saints. The blessed and glorious martyr Thomas rose from one of the shrines and spoke to him, saying: “Philip, you saw me, and you loved me very much when I lived in the world. And this will benefit you, in this life and in the future.” With his hand, he stroked the recumbent man from his head to his groin. He grasped the greatly inflamed and swollen scrotum with two of his fingers and let go after piercing it with his nails. He said to someone standing by, “Take the shoes off his feet.” When this was done, the cleric woke from sleep, and at the same moment the pain left his feet and the terrible swelling left his genitals. And he realized that this was not a dream of the sort that men are often deluded by, especially as he found that the skin of that area was indeed burst by the nails of the martyr. He found himself lying in a great deal of water, with his scrotum drained and shrunk back to its proper size. He rose healed, and from a great distance he came to Canterbury.

Concerning his son John, whose entire body was possessed by pustules

His son, John, had a headache, and his whole body, front and back, was covered with pustules. He washed each one with the water of the martyr, and he was rewarded with a visitation of the martyr in his sleep, who promised him health with this stipulation: “If you vow to go to Canterbury, you will soon be cured.” Waking, he found all the ulcers burst. Made whole in a short time, he took on the owed journey of pilgrimage.