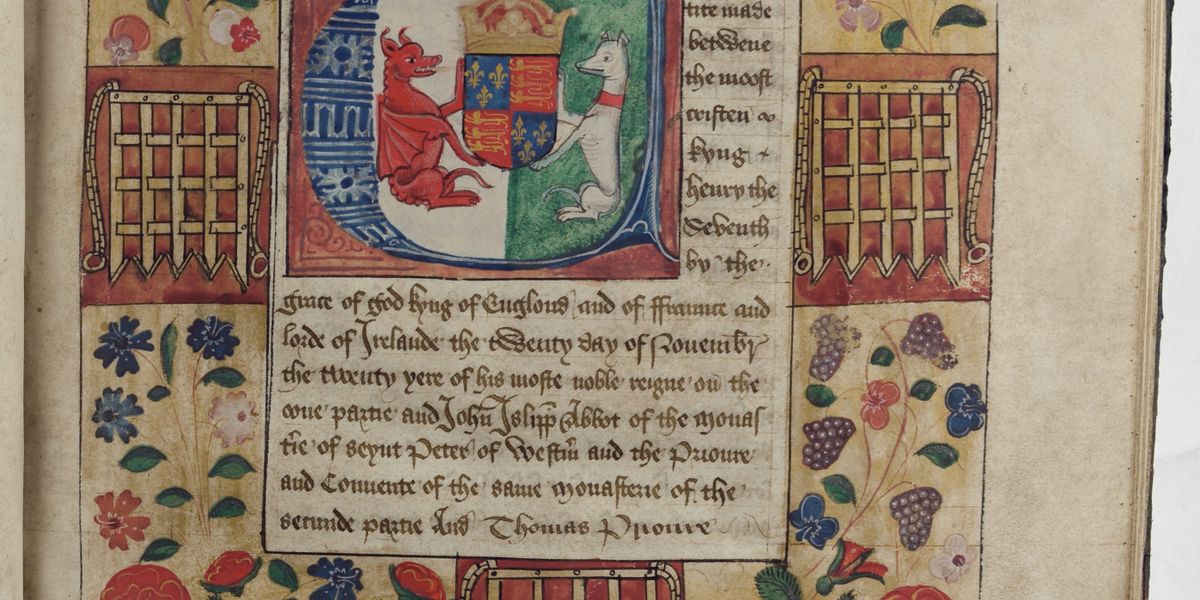 This month’s ‘Picture This’ image is found in Henry VII’s (b. 1457, d. 1509) quadripartite indenture held at Canterbury Cathedral Archives (CCA-DCc/ChAnt/W/48C). The image, and indeed the entire manuscript, is full of Tudor royal iconography epitomising Henry VII’s legitimacy as the rightful heir to the English throne. This particular manuscript is one of four copies; two of its counterparts are found at The National Archives (TNA, E 33/8/1 and E 33/8/2-3) and one sits at Westminster Abbey (Westminster Abbey Muniments 57075). These were important items in both the medieval and early modern periods, symbolising a promise between different people, even a king, and Henry VII had several of these bound indentures commissioned during his lifetime. The design of this example is unusual, with most indentures normally being a single sheet and not a book.

Indentures were legally binding contracts between parties in which copies were made as a means of authenticating the document’s legitimacy and authority. These records were separated by cutting and leaving a jagged edge, as demonstrated at the top of this manuscript; in order for the document to be judged lawful, the copies of the agreement needed to match and fit together. In the case of this indenture, the agreement made was between Henry VII; John Islip, abbot of Westminster; the prior and convent of Westminster Abbey; Thomas Goldstone IV, prior of Canterbury Cathedral Priory; the convent of Canterbury Cathedral Priory; and the mayor and commonalty of the city of London. The agreement outlined a financial arrangement for the Cathedral Priory decided upon by the king and Westminster Abbey. This contract between these parties was also important for the king and his family. The cathedral priory granted the mayor and commonalty that it would keep an anniversary for the king, the souls of Elizabeth, late queen of England, his wife, their children, Edmund Tudor, earl of Richmond, the king’s father, all the king’s ancestors, and the soul of Margaret Beaufort, countess of Richmond and Derby, the king’s mother, after her death. After the king’s death, the anniversary would also be for his soul and was to be kept on the day of his burial. Such clauses remind us that death was a key part of life and Christian belief during the medieval and early modern periods, and praying for a person’s soul would ensure a swift passage into heaven.

It is a large volume, composed of 22 leaves, with the sheer size of the manuscript standing as testament to the importance of this contract and the status of its commissioner, the king. This indented manuscript was made from parchment and remains in its contemporary binding, blue velvet chemise. The Beaufort portcullises decorates both the lower and upper corners and the Tudor rose features in its centre. Also attached (see image right) are three seals: the king’s great seal; the seal of the mayor and commonalty of London and the seal of Westminster Abbey. As seen in previous ‘Picture This’ posts, seals were another way of establishing power and validating The indented manuscript opens up with a beautifully decorated first page.

The illuminated initial ‘T’ (see image at top of page and below) encapsulates the royal coat of arms, with the crown placed atop. This regal symbol is supported by two heraldic images which Henry VII established early on during his reign: the red Cadwaladr dragon, a symbol of his descent from the believed-to-be last king of Briton, named Cadwaladr; and the white Beaufort greyhound, which linked him to the house of Beaufort and his Lancastrian ancestors from whom he was descended through his mother, Margaret Beaufort. Further Tudor royal iconography adorned the border. We yet again see the Beaufort portcullis ornamenting the frame around the text, as well as the red Lancastrian rose that prominently stands out from the smaller surrounding flowers. These images signify the Tudors’ genealogical claims to the English throne and Henry VII’s royal identity.

Images like the one we see within this indented manuscript were commonplace throughout the Tudor period and served a dynastic function. Defeating Richard III at the Battle of Bosworth (1485) and marrying the Yorkist heir to the throne, Elizabeth of York, Edward IV’s daughter, were not enough for Henry VII to legitimate his claim to the throne; he needed to control his image and the way in which people perceived his right to rule. Henry had to find different avenues and methods to secure his place on the throne. One way of doing this was through implementing Tudor imagery and symbols that would be easily recognised. Historian Steve Gunn acknowledged these efforts as a key part of Henry VII’s kingship, showing that he ‘knew the advantages of visible greatness’. The imagery incorporated in this manuscript reveals the importance that Henry VII placed on presenting himself as a distinctly Tudor monarch. This indenture shows that no matter what form, shape or size, Henry VII was dedicated to perpetuating his right to the English throne and the authority of the Tudor dynasty.