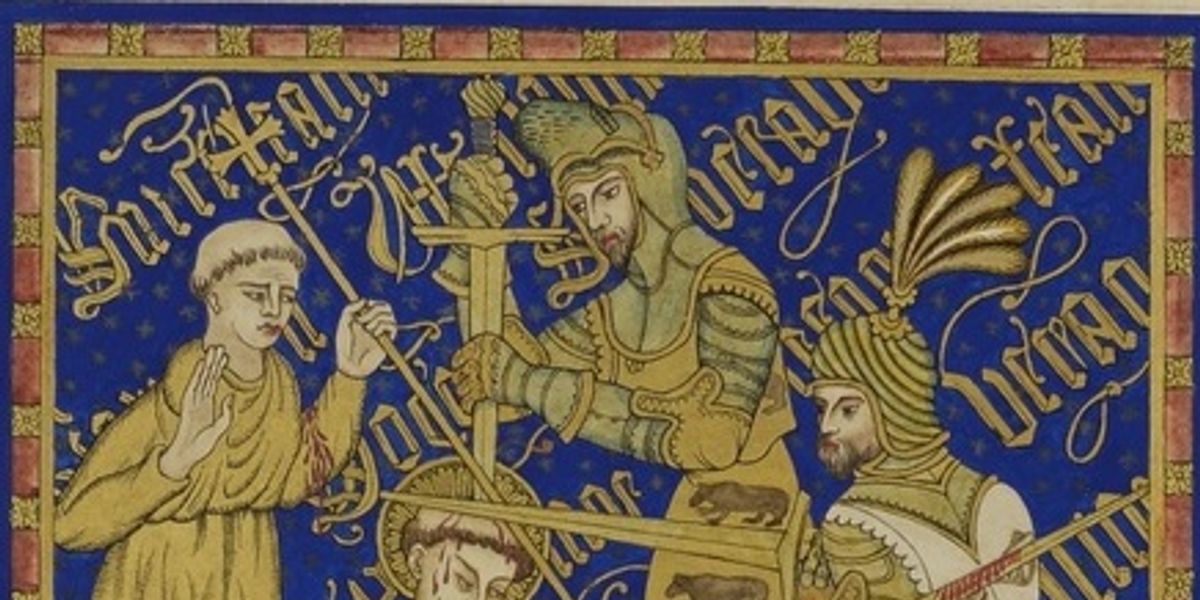 Located on the north side of the Trinity Chapel, and erected next to the site of St Thomas Becket’s shrine, is the tomb of Henry IV, England’s first Lancastrian monarch, and his second wife Joan of Navarre. In contrast to his predecessors, Henry IV chose to be buried in Canterbury Cathedral rather than Westminster Abbey, thereby breaking with a tradition of royal burial established by Henry III. Many reasons have been offered as to why Henry IV may have chosen to be buried at Canterbury Cathedral. Possible explanations are that there was no longer room available in the chapel of St Edward the Confessor in the Abbey, or that he wished to shun the Abbey because it contained the monument built for Richard II, whose throne Henry IV had usurped in 1399. Perhaps his burial here may have even been an attempt to start a royal mausoleum within Canterbury Cathedral. Whilst the reasons for this monarch’s affinity with Canterbury are not exactly crystal clear, what we do know, nevertheless, was that Henry IV specifically outlined in his will, written on 21st January 1409, that he desired to be buried at Canterbury, ‘aftyr the descrecion’ of the then Archbishop, Thomas Arundel. Including this detail, however, was potentially Henry’s way of downplaying his demand to be buried in the most important site within Canterbury Cathedral, metres away from St Thomas Becket’s shrine.

It is from this monarch’s tomb that this month’s ‘Picture This’ image comes. Placed on a wooden panel on the western side of Henry IV’s tomb is a depiction of Becket’s martyrdom. In about 1931, Ernest William Tristram (1882-1952), painter and art historian, made a copy of this panel, which now hangs in the north aisle of the Trinity Chapel, close to the tomb. The watercolour shown here may also be by Tristram. Tristram is renowned for his copies of medieval wall paintings and had begun producing watercolour copies of these as a student. His paintings also survive at another historic site in the heart of Canterbury, the Hospital of St Thomas the Martyr, Eastbridge. These are a copy from of Eastbridge’s thirteenth-century wall painting of Christ in Majesty (located in the refectory) and a copy of the portrait of Eadwine, a monk of Christ Church Canterbury, from the Eadwine Psalter (Cambridge, Trinity College Library, MS R.17.1), produced in the second half of the twelfth century.

The image itself is grisly and a vivid depiction of Becket’s martyrdom. At the centre of the watercolour is Becket surrounded by the four knights – Reginald fitz Urse, Hugh de Morville, William de Tracy and Richard le Breton – who confronted and slaughtered him. Edward Grim, one of Becket’s loyal companions, who stood with him until the end, holds an important place in the image, having thrown his arm out to protect Becket, which resulted in a serious wound – highlighted by the droplets of blood oozing out of his left arm.  The most gruesome and prominent part of the image, however, is Becket himself. We see that one knight has already struck the Archbishop, his sword dripping with blood whilst two others plunge their swords into Becket’s head, causing blood to stream down his face and body. During this assault, de Tracy sliced off Becket’s cranium, as shown by the crown of Becket’s head lying on the ground surrounded by blood, making the scene a harrowing reminder of the events that unfolded on 29th December 1170.

This is a story and image that was well known in the later Middle Ages, during which Becket’s cult was cultivated and grew widely – Geoffrey Chaucer’s The Canterbury Tales is centred around a pilgrimage to Becket’s shrine in Canterbury. The Lancastrians, Henry IV included, were no exception to the widespread interest in the cult.

Strong links have been made between Becket and Henry IV, most recently by Dr Jon-Mark Grussenmeyer. For example, it is recorded that when crowned, Henry IV was anointed with the holy oil that the Blessed Virgin Mary gave to Becket during his exile in France. This was a tale that the pro-Lancastrian chronicler Thomas Walsingham recounted in his Annales Ricardi Secundi et Henrici Quarti, which form part of the writer’s Chronica Maiora. The chronicler wrote that Henry IV’s maternal grandfather, Henry Grosmont, the first Duke of Lancaster, retrieved this oil from France from a holy man and gave it to Richard II’s father, Edward of Woodstock (more commonly known as the Black Prince). The Black Prince then kept it in ‘a chest secured by many padlocks’ in the Tower of London. The Black Prince never became king, however, and was therefore not anointed with it, yet his son, Richard II, was not to be anointed with Becket’s holy oil either on his coronation day. It was only later in 1399, as recorded by Walsingham, that the holy oil was found in the Tower of London, by which point Archbishop Arundel refused to allow Richard II to have a second coronation. Richard then took the holy oil, which was kept in a gold eagle and its flask, with him to Ireland and brought it back at his return. At this point Archbishop Arundel requested the holy oil at Chester and, as recorded by Walsingham, stated ‘that it was now patently clear to him that it was not the divine will that he should be anointed with this oil, but that such a noble sacrament was destined for another’. The Archbishop then kept the holy oil under his care, saving it for the rightful king, Henry IV. This was a story which almost certainly circulated around the time of Henry IV’s coronation and which was intended to strengthen the new King’s links to this popular English saint – being anointed with St Thomas’s holy oil meant that Henry IV’s accession to the English throne came under the patronage of Becket.

The story of St Thomas’s holy oil can be found well before 1399, when Henry IV became king. It is recorded that in 1318, King Edward II asked the Pope for permission to be anointed with the holy oil, which he had been given by the Duke of Brabant who had discovered it over 150 years after it had been hidden by Becket. The Pope refused. The holy oil was unused and kept hidden away it was found in the Tower of London decades later. When recounted by Walsingham around the time that Henry IV became king, therefore, the legend had been altered to allude to the current king by linking St Thomas’s holy oil to the King’s ancestor, Duke Henry, thereby solidifying the Lancastrian monarchy’s connection to Thomas Becket. It was as if the holy oil was meant for the House of Lancaster.

Parallels were drawn between Becket’s and Henry’s links to the Trinity – not only was Henry IV buried in the Trinity Chapel near Becket’s shrine but his funeral took place on the Feast of the Holy Trinity. Henry IV was clearly a monarch blessed by God and the scene of Becket’s martyrdom is a clear indicator of the association made between the mighty king and the high-profile saint.

There were, of course, several benefits of aligning oneself to a saint. One of these was political – Becket was a political saint who was at odds with Henry II. Interestingly, Henry IV’s ancestor, Thomas of Lancaster, did this very thing in appealing to St Thomas before his execution, stating ‘by Seint Thomas, y was neuer traitoure’. In this way, he connected himself to the saint and thus presented himself as a symbol of justice over royal tyranny. This certainly seems to be how Thomas of Lancaster was perceived in the fourteenth century. In a British Library manuscript (Royal MS. 12 C. XII), which contains a collection of texts written in prose and verse, the scribe, who was writing c.1325-50, wrote in a tract on the Office of Thomas of Lancaster that Thomas of Lancaster ‘by death imitatest Thomas of Canterbury’. The purpose of this passage was to indicate that Thomas of Lancaster stood for the same cause. Whilst Thomas of Lancaster’s cult had somewhat diminished by 1370, it was revived towards the end of Richard II’s reign (Thomas of Lancaster himself was canonised in 1390), probably as a result of the then King’s bad kingship and authoritarian ways. We can imagine, then, that Henry IV likely associated himself with Becket – as well as with the cult of Thomas of Lancaster – for similar reasons. In doing so he too could be seen as ending Richard II’s tyrannous ways and restoring the health of the nation, thereby legitimating his position as King.

In having a portrayal of Becket’s martyrdom on his tomb, this link between king and saint was clearly not only something emphasised in life but also beyond Henry IV’s death. One function of tombs was to commemorate the individual buried, conveying information about them beyond the grave. Whilst the effigies of Henry IV and his wife, Joan, operate as a reminder of their royal status, the painting of Becket’s martyrdom serves a similar function, informing all those who pass the first Lancastrian king’s tomb of how he brought salvation to the nation after the tyranny of Richard II and, like Becket, was a symbol for justice.

Jon-Mark Grussenmeyer, ‘The Tomb of a King and the Ideology of a Dynasty: Henry IV and the Lancastrian Connexion to Canterbury Cathedral’ (unpublished MA dissertation, University of Kent, 2012)

Christopher Wilson, ‘The Tomb of Henry IV and the Holy Oil of St Thomas of Canterbury’ in Medieval Architecture and its Intellectual Context ed. Eric Fernie and Paul Crossley (London: The Hambledon Press, 1990), pp. 181-190.