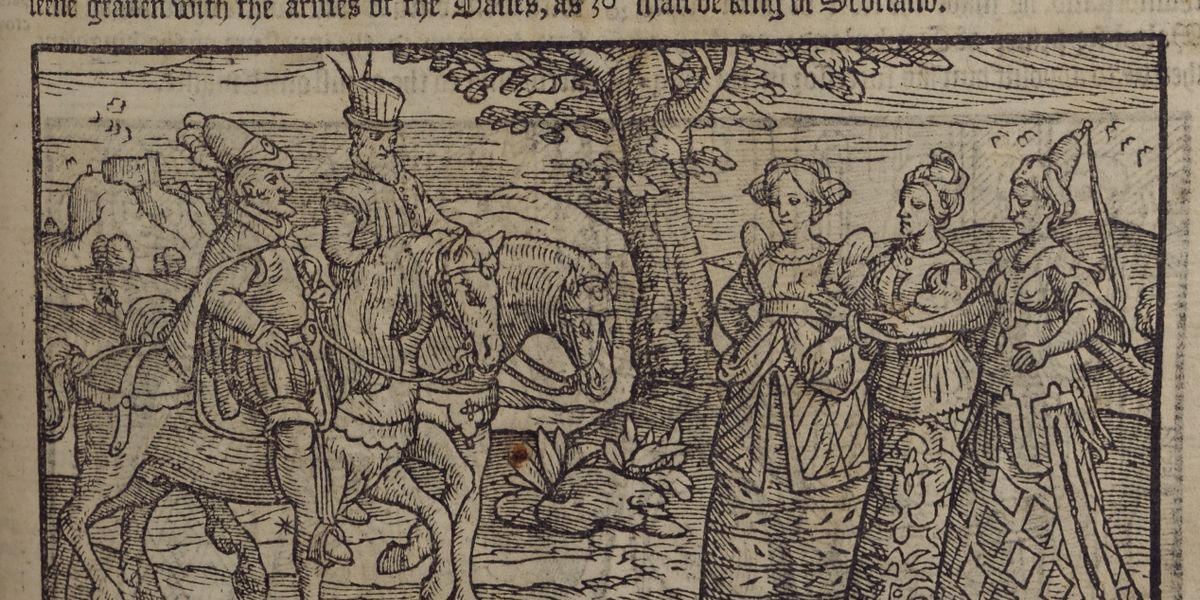 This month’s image comes from Raphael Holinshed’s Chronicles of England, Scotlande and Irelande, a copy of which is held in the library at Canterbury Cathedral. Published in 1577, it is believed that Holinshed’s Chronicles were one source of inspiration for one of William Shakespeare’s most well-known plays, Macbeth, written in 1605/6, and indeed for more than a third of his plays. This image comes from the Scottish section of the chronicle which is largely based on the sixteenth century Scotorum Historia, the work of the Scottish philosopher and historian Hector Boece.

This image perfectly illustrates the story within which it sits. The story beins with Banquo and Macbeth who decided to go ‘sporting’ unaccompanied. With the castle in the background, Banquo and Macbeth are shown dressed in impressive aristocratic dress and mounted on horses. Even the horses appear to be smartly dressed for the occasion, reflecting the status of their riders. It soon becomes apparent that going riding alone was, perhaps, not a wise move for Macbeth and Banquo. As the chronicle narrates, the two men were riding along through the woods and fields when, all of a sudden, three women, dressed ‘in straunge & serly apparell, resembling creatures of an elder worlde’, appeared out of nowhere in front of them. These three women certainly do look surly, but to the modern eye their clothing also looks aristocratic in fashion with long, flowing and patterned dresses. It is quite possible that this type of clothing was unusual by late-sixteenth century standards, the time of publication.

But what makes these women other-worldly? Text printed in the margin describes the women as ‘weird sisters or feiries’; Shakespeare described them as the Three Witches. When Banquo and Macbeth came to a halt in front of the women, each spoke, producing the prophecy that would contribute to the characterisation of these women as ‘other worldly’. The first woman said ‘All hayle Makbeth Thane of Glammis’ (the title which he had just inherited following the death of his father). Then, two of the women said ‘All hayle Macbeth, Thane of Cawder’. The third also said ‘All hayle Makbeth that hereafter shall be king of Scotland’. Just as soon as they had appeared, the three women ‘vanished immediately out of theyr sight’.

The two men’s encounter with these women was considered but a ‘fantastical illusion’, so much so that Banquo began calling Macbeth ‘king of Scotland’ in ‘jeste’. As the plot of Shakespeare’s play goes, Macbeth did indeed become the king of Scotland. Encouraged by his wife, Macbeth killed King Duncan and became king himself. With the prophecy of the three ‘sisters’ fulfilled, Macbeth lived the rest of his life haunted by guilt.

So, when you go down to the woods this October, keep an eye out for the Three Sisters…