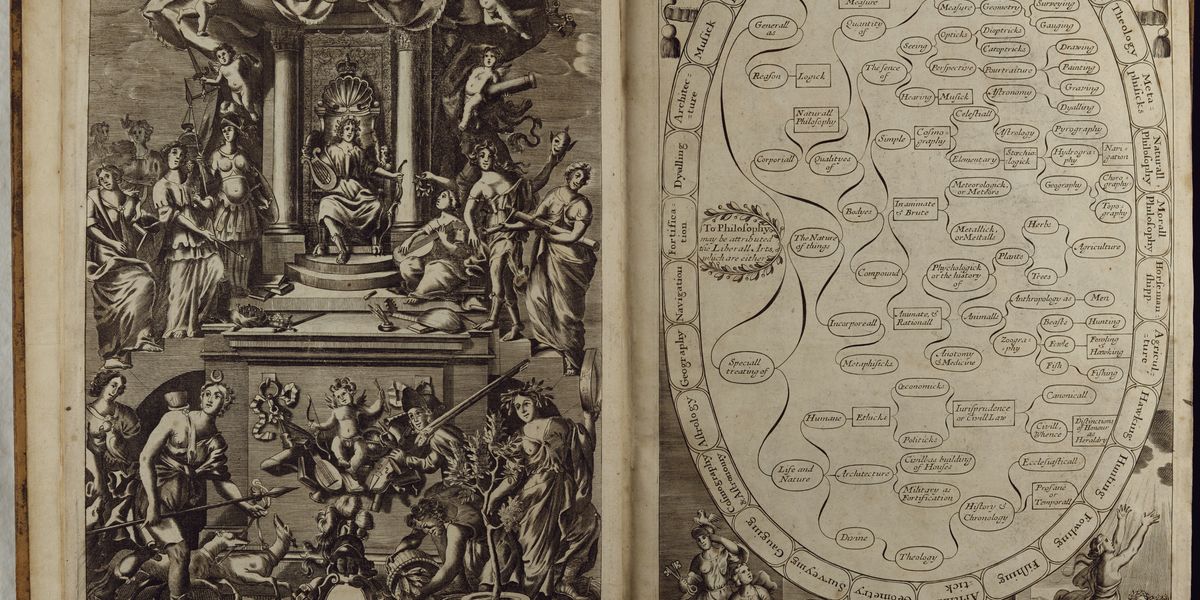 A culture of gentility grew throughout the seventeenth century in England, and with it came an increase in the publication of manuals instructing people in the perceived proper behaviour and pursuits of a gentleman. Richard Blome (bap. 1635, d. 1705), a cartographer and bookseller, first published The Gentleman’s Recreation in 1686 at a time when the genre had been established for a number of years, thanks to the efforts of authors such as Gervase Markham. Blome began his professional career as a heraldic painter before moving into cartography and the book trade, and his publication history shows a sustained interest in the visual aspect of antiquarian pursuits. The Gentleman’s Recreation contained chapters on geography, cartography and heraldry, as well as others on topics as diverse as grammar, agriculture, optics and portraiture. This variety of topics reflects the belief that a gentleman ought to strive to be a polymath, equally adept at maintaining his household and lands as he was at discussing and interpreting classical texts.

This type of book was expensive to produce and Blome is considered an innovator in financing his publications, having published the first edition of The Gentleman’s Recreation with the patronage of over two hundred benefactors from the nobility and the gentry, with each patron’s coat of arms being reproduced in the book. Stan Mendyk suggests that Blome was ‘one of the first’ publishers to use ‘the advance subscription method’ to finance many of his projects and endeavours. The success of this method balances on the notion that not only was it important to be genteel, but also to be recognised as being so. Hence, patrons paid to have their arms included, thus providing proof of their gentility by their presence in a book of this type, while expediently providing funds for the book’s publication.

In a strong testimony to the success of the advance subscription method, in the posthumous second edition of 1710 the benefactors have been replaced with a list of ninety new subscribers. On the title page of the 1710 edition we are reminded that the book is ‘Illustrated with near an hundred Copper-Cuts’ and has been ‘corrected, with near one half of additions’. These copperplate engravings were much more expensive to produce and print than woodcuts but they allowed for much finer detail and a higher quality image and the contents of the book had increased by almost a half from the first edition to the second. The book itself is a large folio volume measuring 250mm x 414mm, and the three parts totalled over 750 pages. This would have been an extraordinarily expensive undertaking and was probably only viable with the secured funding from subscribers. Indeed, Blome is keen to remind his readers that ‘If these Noblemen and Gentlemen had not contributed towards the Charge of these Plates, this Book could not have been afforded for less than Three Guineas’ (sig. ar).

As mentioned, the book was divided into three parts: the first ‘A short and easie introduction to all the Liberal Arts and Sciences &c’; the second ‘Horsemanship, Hawking, Hunting, Fowling, Fishing, Agriculture &c’; and the third is ‘A Compleat Body of all our Forest, Chace, and Game-Laws, as they are at this time’. The title page appeals to the genteel taste for all things French and claims that the additions to the second edition have been made ‘from the most Authentick Authors, especially severall lately Printed at Paris’. The works of Paul de Rapin and Bernard Lamy are noted in the preface as indicators of the quality of material that is being bought by the reader. Indeed, Mendyk suggests that Blome ‘acted more as compiler or editor than as author’ for a number of his publications, bringing together excerpts from other sources and translating foreign works to create compendious books. There is evidence of a further interest in French philosophy throughout The Gentleman’s Recreation, with a focus on the idea of ‘method’ in the ordering of a gentleman’s knowledge. This interest in ‘method’ probably refers to the work of Peter Ramus, a French philosopher who popularised a form of logic that could easily be represented in tabular form. This month’s image provides a great example of the visual aspect of Ramus’s theory.

The illustration, entitled ‘An Encyclopedy of ye Arts & Sciences’ and dedicated to King James II, is dominated by a central oval which is bordered by a series of twenty-nine ellipses, each containing a chapter heading of the book. The oval itself contains a diagrammatic representation of the ‘Liberall Arts’, using sequential bifurcating, and sometimes trifurcating, brackets to distil the liberal arts, and by extension the limits of human knowledge, down to their constituent parts. The seven Liberal Arts were divided into the ‘trivium’ and the ‘quadrivium’. The core subjects, the trivium, were grammar, logic and rhetoric; these were complemented by the study of arithmetic, geometry, music and astronomy, collectively known as the quadrivium. This process of anatomisation was popularised by Ramus in the late sixteenth century and these bracketed diagrammatic representations were considered the most succinct mode of representing these concepts, blending attributes of both image and text. At the base of the image is a curling piece of paper with the words ‘sapientia est nosse divina et humana et horum causas’ written on it. This quote comes from a letter Seneca wrote to Lucillius on the Stoic understanding of wisdom and philosophy, and it translates as ‘wisdom is the knowledge of divine and human matters as well as their causes’. This quote encapsulates Blome’s vision of the perfect gentleman’s recreation, founded in examples from classical antiquity and encouraging the pursuit of all types of knowledge.

Among the ‘near an hundred’ coppercuts there are twenty-four of these image-text diagrams, each representing one of the areas bordering the ‘Encyclopedy’. In combination the images show how knowledge was being organised in the late seventeenth and early eighteenth centuries, and there are a number of other bracketed images contained within the book that complement these more decorative designs. Throughout the book, as in this image, we are reminded of Blome’s reliance on continental sources in his work and there is a clear message behind The Gentleman’s Recreation: an English gentleman ought to think, act, and present himself as if he were French.

Walter Ong, Ramus, Method, and the Decay of Dialogue: From the Art of Discourse to the Art of Reason (Chicago: University of Chicago Press, 2005).