Food and drink in the miracles of St Thomas Becket 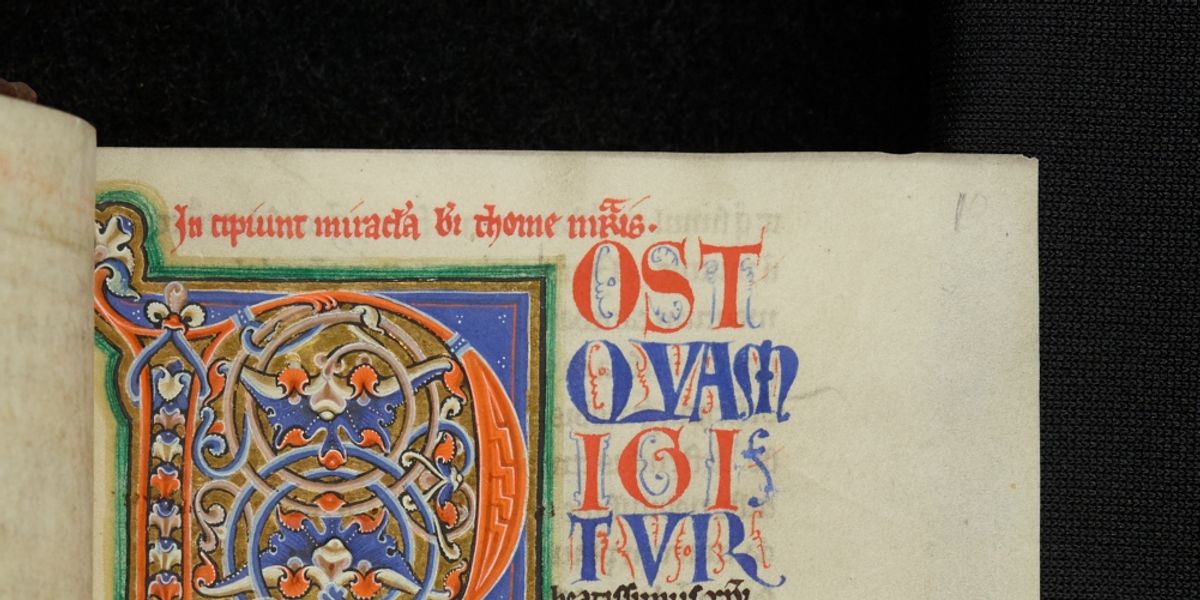 St Thomas Becket was arguably the most commemorated English saint of the Middle Ages. Following the Archbishop’s martyrdom on 29th December 1170 in Canterbury Cathedral, pilgrims flocked to his shrine from across Europe. Over 700 miracles attributed to Becket were recorded by two 12th-century priory monks, William of Canterbury and Benedict of Peterborough. Many relate to food and drink, including the experiences of royal figures.

A future article will discuss the Becket miracle of King Louis VII of France, which is documented in a series of charters now held by Canterbury Cathedral Archives. Louis VII had known Becket personally and protected the Archbishop during his exile to France (1164-1170). The King visited Becket’s tomb in the crypt in August 1179 to pray for the recovery of his son Philip from illness; when his son recovered, Louis granted annually to the Cathedral Priory 100 measures of wine in Becket’s name.

Benedict of Peterborough wrote of another miracle relating to food that he recorded as amusing everyone who heard it. Edric, a priest of Ramsholt, reported to Benedict the miracle of two Ramsholt children and a cheese: the sister mislaid the cheese and, afraid she would be punished by her mother, asked her brother for help. Unable to find the cheese, they both prayed to St Thomas Becket for assistance. The saint came to them in their dreams, guiding them to an old churn where the girl had left the cheese. The children told their mother, who reported the miracle to the priest Edric. Benedict of Peterborough’s miracle collection survives fully in 20 manuscripts today, including a 12th-13th century copy written at St Augustine’s Abbey, Canterbury (now Cambridge, Trinity College MS B.14.37). The manuscript is arranged into five books and opens with a beautiful ‘P’(ost) initial with vine leaf decoration in gold, vermillion, blue and white inks.

Becket was commemorated through food in the medieval period, as evidenced by the installation feast of John Stafford, archbishop of Canterbury in 1443. A copy of the banquet menu survives in a 15th-century Middle English cookery book, entitled A Boke of Kokery (now British Library, Harley MS 4016). Possibly written for an aristocratic household, the cookery book contains 182 recipes as well as the menus of banquets held for Stafford and King Richard II in 1387. The Stafford feast featured three courses of dishes including venison, heron, rabbit and quail as well as three extraordinary showstopper pieces known as ‘subtleties’. Subtleties were sculptures made generally of sugar that were presented during luxury feasts between courses as entertainment for guests in order to demonstrate the skills of the cook.

The first subtlety depicted Stafford himself as archbishop kneeling before St Andrew enthroned and surrounded by beams of gold. The second course piece portrayed the Holy Trinity, with St Thomas Becket on one side and St Augustine of Canterbury on the other, and three figures of the Archbishop, the Prior of Christ Church and the Abbot of St Augustine’s kneeling before them. The final subtlety commemorated Becket’s martyrdom, depicting the head of God in a sun of gold with the Holy Ghost above and the saint kneeling before the godhead with the point of a sword in his head. The scene was surrounded by the Virgin Mary holding a mitre, St John the Baptist and four angels incensing. No image of this subtlety survives, but these entertaining showstoppers would have been creative and visual reminders to the newly installed archbishop of Becket’s powerful legacy and the role of the Church in England.

The fascinating written and visual culture of St Thomas Becket, some of which is being explored in Picture This…, ensured the survival of his memory in the public’s imagination even many centuries after his death and translation.