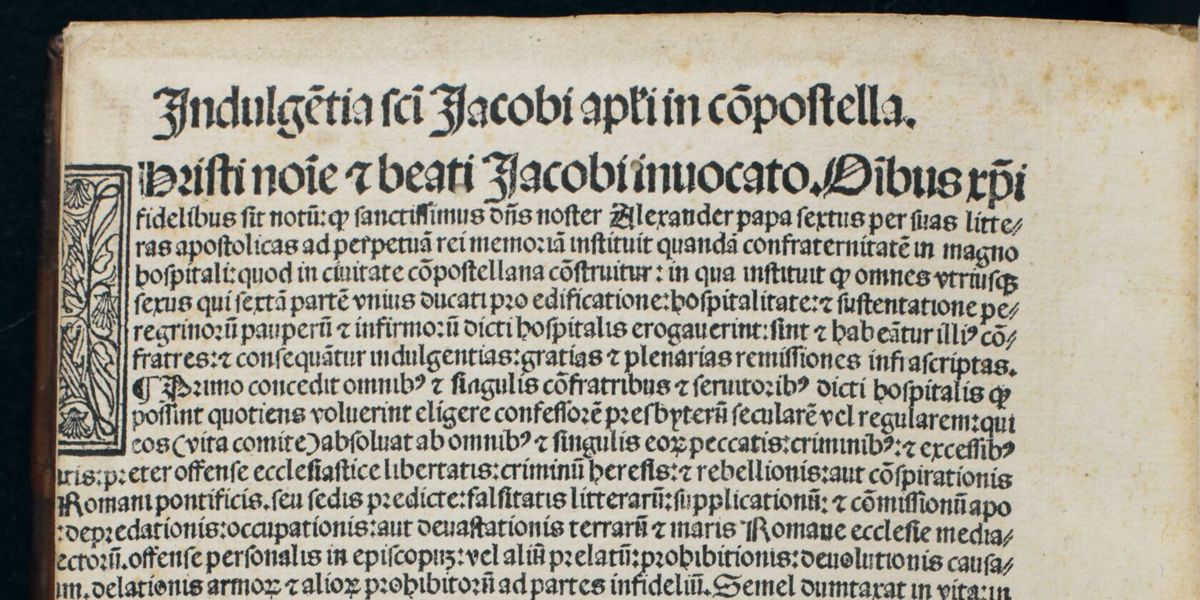 The monthly ‘Picture This…’ articles highlight items from the collections of Canterbury Cathedral and related collections, and are written by postgraduate students from the University of Kent and Canterbury Christ Church University, staff from the three institutions and guest contributors.

Following on from the series on Becket, Picture This… is now considering examples of early printing in Canterbury collections. We welcome Dr David Shaw to start the series in October 2021 to mark Libraries Week.

In 1503 Queen Isabella of Spain (1451-1504) decided to found a hospital at Compostela for pilgrims making the journey to the shrine of Saint James. It was to be called the Hospital of the Catholic Monarchs after Isabella and her husband King Ferdinand II of Aragon (1452-1516). The work of the hospital was managed by a religious confraternity which lodged and cared for pilgrims coming to Compostela from all over Europe. In order to fund the building of the hospital and support its charitable work, the confraternity sought to offer an incentive to benefactors in the form of an indulgence for the remission of their sins which would avoid the need for them to spend time in purgatory after their death.

Isabella promised that anyone joining the confraternity or contributing one twentieth of a ducat would enjoy remission of their sins through the prayers of the confraternity in the hospital chapel. To facilitate this, a plenary indulgence (a complete remission of punishment for sin) was issued by Pope Alexander VI (1431-1503). A blank indulgence certificate was printed for ‘pardoners’ to sell all over Europe. The Cathedral Library has two copies of this document which were used as pastedowns at the end of a book printed in Lyon c. 1512 in a binding made in Cambridge in the 1520s.

The indulgence was printed on the two halves of a sheet of printing paper which could then be cut in half to provide two copies for sale. It has the heading ‘Indulgentia sancti Iacobi apostoli in compostella’, followed by the text issued by Alexander VI (‘Alexander papa sextus’). At the foot there is a woodcut representation of the seal of the Dean of the cathedral of St James, Compostela, who was the administrator of the funding campaign, with a facsimile of his signature. The final lines of the indulgence text itself have blank spaces for the indulgence seller to write in the name of the purchaser and the day and month in 1503. In our two copies the blanks have not been filled in and the two copies are still joined together on the same sheet of paper. They were never offered for sale, possibly because Alexander died the same year and so the indulgence in his name could no longer be used.

There was no printer in Compostela at this time so the Dean of the cathedral had to farm the job out to another city. The certificate gives no indication of where it was printed. From the typefaces used, it can be identified as the work of the successors of Pedro Hagembach in Toledo. Pedro (or Peter) was one of several immigrant German printers who worked in Spain in the late fifteenth century. He died in 1502 and so subsequent output from his press is attributed to unnamed ‘successors’. The choice of Toledo is a little odd as it is several hundred miles from Compostela but Hagembach was regularly employed for printing indulgences for the Spanish Church authorities.

As a final thought we can consider the identity of Pope Alexander VI. He was the notorious Rodrigo Borgia, remembered as a power-hungry womaniser who accumulated benefices and great wealth (and children) during his ecclesiastical career. A number of issues of his indulgences survive for the hospital of St James, including ones in English for sale in this country. It is a little ironic that only fifteen years later the sale of indulgences was one of the issues highlighted by Martin Luther in his break with the Catholic Church.