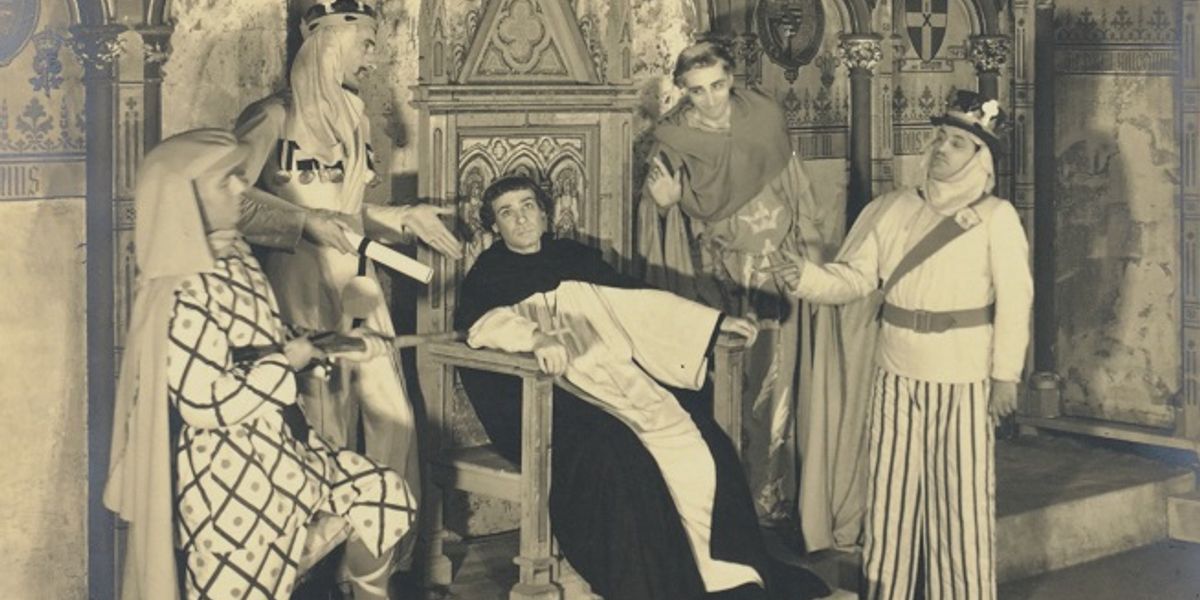 The monthly ‘Picture This…’ articles highlight items from the collections of Canterbury Cathedral and related collections, and are written by postgraduate students from the University of Kent and Canterbury Christ Church University, staff from the three institutions and guest contributors. The year 2020 was an anniversary year of St Thomas Becket and throughout the year ‘Picture This…’ focussed on Becket. As some of the activities planned for 2020 have been rescheduled for 2021, the theme will be continued for the first half of 2021.

The brutal murder of St Thomas Becket in his own cathedral on 29th December 1170, 850 years ago, sent shock waves far and wide. The events of that fateful day are recorded in some detail, as there are five eye-witness accounts of the martyrdom. One of the most notable and powerful is that of Edward Grim, a monk visiting Canterbury, who was injured while trying to protect the Archbishop.

Over the centuries, Becket’s murder has inspired great creativity. In the past year, ‘Picture This…’ has explored depictions of Becket and his murder in seals, stained glass, metalwork and manuscripts. This article turns to the best-known work of modern literature inspired by the Becket story, Murder in the Cathedral by T.S. Eliot, and its production for the stage.

Eliot’s verse play was commissioned for the series of annual Festivals of Music and Drama organised by the Friends of Canterbury Cathedral. When writing the play, Eliot studied the medieval accounts of the murder; the play shows the influence of Greek and medieval drama, as well as by the verse play Becket by Alfred, Lord Tennyson, published in 1884. Murder in the Cathedral was first performed in June 1935 in the Cathedral’s Chapter House. The performance was innovative in a number of ways, as reflected in contemporary reviews. The New Yorker described it as ‘a turning point in English drama’. Performing drama within a cathedral setting was in itself an innovation. In 1928, John Masefield’s The Coming of Christ, performed in Canterbury in the nave, was the first drama to be staged in an English cathedral since the Reformation. Masefield’s was the first of ‘The Canterbury Plays’, a series of plays staged during Friends’ Festivals until 1948.

The producer of Murder in the Cathedral was E. Martin Browne, who had produced Eliot’s play The Rock in London in 1934. The designer of the costumes was Stella Mary Newton (née Pearce), who had also designed the costumes for The Rock. Born in 1901, Newton first worked as an actress, turning to costume and dress design, running a haute couture shop in Mayfair as well as designing for the stage. After World War II, she concentrated on the history of costume, founding the Department for the Study of the History of Dress at the Courtauld Institute in 1965.

In the Cathedral Archives there are ten of Newton’s designs for Murder in the Cathedral: those for the knights, the ‘Tempters’ and a figure from the chorus (reference CCA AddMs/103). Further designs, including some fabric samples, are held in the collections of the Victoria and Albert Museum, although some of these are for the play’s later productions at the Mercury Theatre in London later in 1935. Unfortunately no design for Becket’s costumes survives.

The Cathedral Archives also holds photographs of the 1935 production by the local photographers Fisk-Moore. Also surviving is a tantalising short film by local amateur film-maker Sydney Bligh, which shows Eliot himself standing with Browne, and members of the cast walking through the cloister. All of these images are of course in black and white; Newton’s designs are evidence for the colour of the production. Newton decided to make the costumes striking, in order to detract from the background of the fourteenth-century Chapter House, its architecture being several centuries later than the Norman architecture of the Cathedral of Becket’s day. She decided not to recreate a style authentic for 1170, but rather to reflect contemporary fashion.

The costumes for the Tempters are particularly notable in this regard. The four Tempters appear in the first part of the play in a scene set in Canterbury just after Becket had returned from exile in France on 2nd December 1170. They try to influence the Archbishop to consider four separate courses of action, with the Fourth Tempter encouraging him to consider martyrdom. Shown here is the design for the costume for the First Tempter, who tried to tempt Becket back to London life. He is depicted as a London ‘man about town’, with a long skirt slit to look like trousers, and a top hat with a coronet. The design, drawn on an angle on the paper, shows the dominant colours as yellow and orange. The Fisk-Moore photograph showing Becket surrounded by the Tempters reveals more detail of the costume, including the bold stripe of the slit skirt and the contrasting belt and cloak strap.

The production of Murder in the Cathedral was a combination of local and professional talent. The costumes were made in Canterbury under the supervision of Vera Coburn Findlay, who had trained as an actress and indeed performed in some of the ‘Canterbury Plays’. The leading roles were played by professional actors; that of Becket was played by Robert Speaight, who was born at St Margaret-at-Cliffe in Kent. Speaight played Becket over 1000 times in all, acting in touring productions across the British Isles and North America. Perhaps inevitably, this led him to develop an interest in Becket, and he published a biography of him in 1938, designed not as an exhaustive historical work but rather for the ‘general reader’.

Becket’s story continues to intrigue and fascinate. While the play, like Newton’s costumes, was a product of the 1930s, it has remained in the repertoire and the themes it explores remain highly relevant today. With its intense poetry and prose, it is a challenging piece for producers, actors and spectators alike. Fashion has moved on apace, but Murder in the Cathedral has not lost its appeal.

For a fuller version of this article, see Canterbury Cathedral Chronicle no 114 (2020)

Sydney Bligh’s film is available to view at https://player.bfi.org.uk/free/film/watch-canterbury-1935-murder-in-the-cathedral-1935-online