Depictions of Power: Representations of Queenly Authority on the Seal of Eleanor of Castile 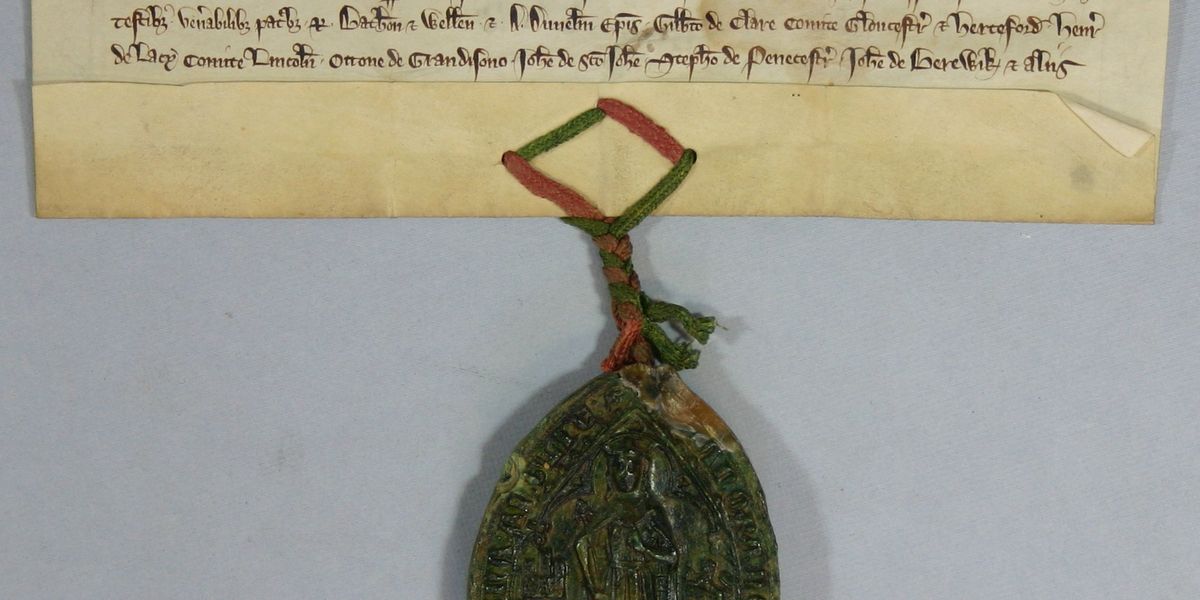 In the Middle Ages seals were an important means of authenticating documents. They were often attached to charters recording grants of lands or rights. As such, seals were an important symbol of power and authority. The images depicted on seals reveal much about the identity and self-perception of the donor, often as a representation of how they wanted themselves and their authority to be shown.

This seal from the collections of Canterbury Cathedral Archives is a beautiful, long oval shape cast in green wax, formerly attached with green and yellow silk threads to a charter granting land and privileges to Canterbury Cathedral Priory. It depicts a female figure, standing wearing a long, flowing, floor-length gown, a cloak across her shoulders and a three-pointed crown atop her head. In her right hand is a floriated sceptre and her left hand is held to her chest. The figure appears to be under an arch and stands atop a pedestal, with a lion passant (on all-fours) beneath her feet. In the background, there are two castles and two lions rampant, one of each on either side of the figure. Along the edge of the seal reads the Latin legend:

(Eleanor, by the grace of God, queen of England)

From this combination of images and text we can identify the seal’s owner as being Eleanor of Castile, queen consort of Edward I (1272–1307). Therefore, the castles in the background represent the Kingdom of Castile, as Eleanor was the daughter of Ferdinand III of Castile. These sit alongside the lions rampant (upright on their hind legs), symbolising England.

This use of iconography reveals much about how Eleanor perceived her collective family identity, with the castles of Castile alternating with the lions of England, demonstrating the fusion of Eleanor’s marital family, as Edward’s wife, but also her natal family, as a daughter of the king of Castile. Eleanor and Edward married in 1254 as part of a peace treaty between England and Castile. On her seal Eleanor depicts this union as well as her position as the conduit of peace. This was replicated on her tomb at Westminster Abbey, which was decorated with shields emblazoned with castles and lions, as well as the heraldry of the County of Ponthieu (which she inherited from her mother in 1279).

The seal also reveals how Eleanor perceived her own power and agency, or at least how she wanted her authority to be represented. On her seal she is depicted as a crowned queen, reiterating her status. The floriated sceptre she holds in her right hand is rather unusual for a woman’s seal. Usually queens are depicted holding orbs, birds or flowers to emphasise their fertility and dynastic motherhood. This is the case in the seal of Eleanor of Aquitaine (Henry II’s queen), which contains all three of these aspects of iconography as a bird sits atop an orb in her left hand. In comparison, Eleanor of Castile is depicted wielding a rod of authority, emphasising the power she wished to exude. This is in contrast to the realities of her queenship, in which Edward permitted her very little political influence. In fact much of Eleanor’s reputation is shaped by her motherhood, giving birth to perhaps as many as 16 children, as well as her acquisition of lands and estates.

At some point in its history the seal became detached from its corresponding charter. The two were only reunited in 2003. In the charter Eleanor granted to the prior and convent of Canterbury Cathedral Priory an acre of land in Westerham, with the advowson of the church and a further acre of land in West Cliffe, by Dover, with the advowson of the church. Together, this handsome and carefully constructed seal alongside its charter represent a key aspect of Eleanor’s queenly prerogative: her religious patronage.