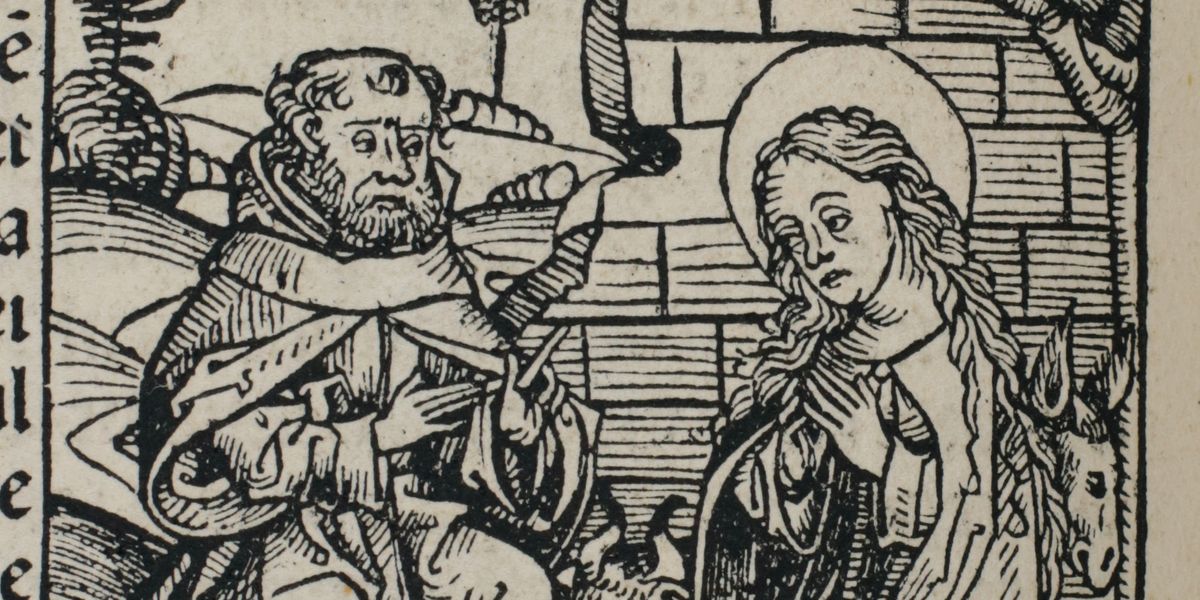 Our December Picture This . . . is aptly Christmassy: a woodcut of a Nativity scene in one of the most impressive (and possibly the largest) of the Cathedral’s early printed books, the Nuremberg Chronicle (CCL W/S-18-1), second only to the Gutenberg Bible in terms of its fame. We have featured it before in Picture This . . . but it holds such an enormous treasure trove of illustrations, forgive us for returning to it in our current series on early printed books.[1] This wonderful late fifteenth-century tome (published in 1493) is a universal history of the six ages of the world from 5200 BC to 1493 AD and features 1804 illustrations (around two thirds were duplicated elsewhere in the book), on 664 pages that measure c. 442 x 300 mm. (That means each leaf is over A3). The Nativity of Jesus Christ was used by the woodcut artists to illustrate the 5200th year after the Creation, following the calculations of Eusebius, Bishop of Caesarea, who died around 340 AD and whose calculations would have meant the end of the world took place in 800 AD. The Nativity is one of four illustrations running down the right-hand side of the folio, depicting the life of Christ ; the second is Jesus among the doctors in the temple. The third scene in 5229 (or 30 AD) depicts Jesus’s baptism in the river Jordan, followed by the last scene, of the Crucifixion. Opposite these scenes, in the left margin are woodcuts depicting the proconsuls of Judea in the time of Christ.

The Latin text next to the Nativity illustration in the Nuremberg Chronicle has been translated as follows:

Jesus Christ, the Son of God, and our Saviour and Redeemer, was born at Bethlehem, in Judea, in the forty-second year of the reign of Augustus and when Quirinius (Cirino) was governor, and the whole world was at peace. He was born of the Virgin Mary, who according to the annunciation of an angel, conceived him of the Holy Spirit, to redeem the human race from the fall which was due to the disobedience of the first pair. It was he who by his birth, by his life, by his death, by his resurrection, by his ascension to heaven, and by many unheard-of miracles gave testimony of his divinity. For, firstly, his birth was miraculous, and so the angels in heaven sang that he was God in the Highest; and they gave the shepherds great joy in announcing to them the birth of the Saviour of the World.

Translation by Walter Schmauch, from the German edition of the Nuremberg Chronicle, hosted by the Morse Library, Beloit College.

However joyous the shepherds and angels were, the Nativity scene looks poverty-stricken, the babe lies on straw on the ground, the stable is a ruin that offers little shelter, and Mary and Joseph look tired and careworn, kneeling in the open at the edge of Bethlehem.

Examining other copies of the Chronicle can be enlightening. For example, colour makes a difference. As Laura Novoluni discusses on the Cambridge University Library website, woodcuts in a number of  both Latin and German versions copies were hand coloured by ‘contemporary German artists’.[2] The copy that originally belonged to the author of the Nuremberg Chronicle, Hartmann Schedel (d. 1514), is digitized on the Library of Congress website (on the left). The artist has cheered Mary up with an orange dress, golden tresses and a sky-blue cloak and warms up Joseph with the same colour blue hood, a warm brown cloak, and a long yellow tunic.[3] The thatched roof of the stable is picked out in yellow too and there is a blue sky and a green landscape. The hand-colouring despite it being the author’s own copy, was quite rough (note how the end of Joseph’s cloak on the right remained unpainted, mistaken for his foot). Perhaps this is because the woodcut is only c. 21/2 inches wide x 3 inches long.

Yet compare the contemporary finely coloured version (centre) that once belonged to Archbishop of Canterbury, Matthew Parker (d. 1575), now digitized by Cambridge University Library.[4] This woodcut has received a much more delicate execution that preserves rather than hides the woodcut details, although the ox seems to have turned rather green.

The plain woodcut in Canterbury Cathedral’s Nuremberg Chronicle allows our own imaginations to colour the Nativity, for example, Mary might not have been blonde nor the landscape quite so verdant. The monochrome also highlights key details, such as the gesture Joseph makes to Mary’s halo while her line of sight is to Jesus, forming a triangle of protection, care, and love.

On a previous folio (63r) the little town of Bethlehem is depicted as a ruin too, with unroofed, windowed walls and column bases, in the same scene as the destruction of Jerusalem by Titus, the son of the Roman Emperor Vespasian, in 70 AD. However, as Professor Anthony Bale has argued, later medieval travellers and pilgrims, such as Sir John Mandeville, imagined the space between Bethlehem’s Church of the Nativity and the town of Bethlehem as a ‘campus floridus’, a field of roses with both white and red flowers, symbolizing Christ’s passion and Mary’s virginity and motherhood. May Christmas colours of greenery with red and white rose petals gently betoken and illuminate a safe and peaceful Christmas for everyone.

‘In the beginning . . . there were spheres of Angels,’ Picture This. . . (May, 2016) https://www.canterbury-cathedral.org/heritage/archives/picture-this/in-the-beginningthere-were-spheres-of-angels/

‘Item 6: The Nuremberg Chronicle,’ The History of the Book in 20 Books in the Cathedral’s Collections https://www.canterbury-cathedral.org/heritage/collections/a-history-of-the-book-in-20-books-from-the-cathedrals-collections/item-6-the-nuremberg-chronicle/.