‘Adoramus te’: the Crucifixion from the Plumptre Missal 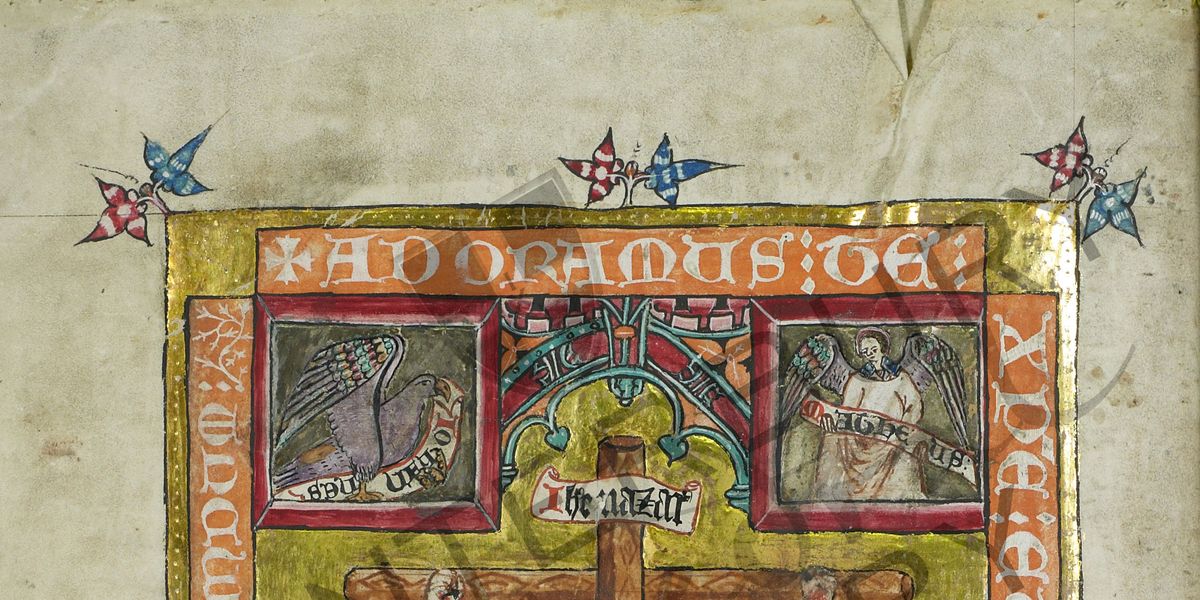 A Year in Pictures

August 2013 brings us to the first anniversary of ‘Picture this…’. Through this collaborative project between Canterbury Cathedral Library and the Centre for Medieval Studies at the University of Kent we have been able to share a year’s worth of images from books housed in the Cathedral Archives and Library. Therefore, it is a very great pleasure, and aptly fitting, to mark the occasion with an article written by Canon Christopher Irvine, who is not only the cathedral’s Canon Librarian, but also Honorary Senior Research Fellow at the School of History, University of Kent.

From 19th to 30th August, (closed 24th-25th August) the anniversary of ‘Picture this…’ will be celebrated by an exhibition of the books used throughout the first year. This will take place in Canterbury Cathedral Library between 2pm-4pm and is free to the public.

A half-day symposium, free of charge and open to all with prior booking, will take place as a launch event for the exhibition on Saturday 17th August from 10am to 1pm. Some article authors will expand upon the books that they examined this year and there will be a chance to preview the exhibition.

The Plumptre Missal (Canterbury Cathedral Archives, U53/1) is a late 14th or early 15th-century liturgical book, commissioned by the Stathum family, the Lords of Morley in Derbyshire, presumably for use in the parish church, of which the family were significant patrons. It then passed into the hands of the Sacheverall family who were their successors. Names of some deceased members of the family are inscribed in the Kalendar, and it can be reasonably inferred that the mass said on the anniversary of the death of a deceased member of the family would have been offered on their behalf as the mass was understood to hold together the living and the dead, the seen and unseen worlds.

A Missal was a service book that included all the prayers, chants and readings that a priest would require to celebrate the mass. There were various Rites, or ‘Usages’ in the pre-Reformation Church in England, such as York, Hereford, and Sarum, as well as Rites customarily used by particular religious orders. The Sarum Rite was by far the most prominent Rite, but this was far from uniform. Before books were printed, texts were copied by hand, and so mistakes and slight variations in wording were common, and this applies equally to this parish Missal. The Missal manuscript is written in two columns in black and red ink, with major capitals and decoration in blue.

From the Carolingian era there was a deliberate matching of word and image in liturgical books and this was more than illustration. At the heart of the mass was the prayer known as the Canon, or what we would call today a Eucharistic Prayer. Examples abound of earlier 13th-century Missals where the capital letter of the ‘Te igitur’ section of the Canon was illuminated, the letter T forming the shape of the cross on which was drawn the figure of the crucified Christ. In this later Missal we have a full page illumination of the crucifixion (folio 74) which faces the prayer following the Sanctus which begins: ‘Te igitur’ (‘We therefore pray and beseech you…’)
Simply put, it could be said that illuminations pictured the meaning of the words of the prayer that was said by the priest, and undoubtedly assisted him to remain focused in his duty of offering the mass ‘for and on behalf of’ others. The mass was seen as a commemoration of the sacrifice of Christ on the cross of Calvary, figured in the bread and wine. These gifts of bread and wine were believed to be transubstantiated into the body and blood of Christ by the priest praying the words of the Canon. The very hinge of this prayer rehearses the words Jesus spoke over the bread and the cup at the Last Supper. On either side of this so-called Institution narrative are two sets of prayers which seem to mirror each other because of the frequent and repeated use of the vocabulary of sacrifice. And so the illumination displaying the crucifixion, the self-giving of Christ on the cross to God the Father, is a perfect juxtaposition of text and picture, in which the one illuminates the meaning of the other.

A text inscribed in the borders that frame the illumination echoes a popular devotional response to the ritual veneration of the Cross on Good Friday: ‘We adore you O Christ and we bless you for by your holy cross you have redeemed the world.’ In the four corners are the four conventional symbolic figures of the four Evangelists framed in red. The eagle represents St. John, the angel St. Matthew, the lion St. Mark, and the winged bull St. Luke. This typology is rooted in the visionary literature of Revelation, the last book of the bible (Revelation 4.7).

Occupying the centre space is the figure of Christ on the cross flanked on either side by Mary and the beloved disciple, John. The composition follows a detail in St. John’s Passion narrative (John 19.25-27). The image itself would only have been seen by the priest saying the mass. But the scene would have been familiar to the congregation as it was reproduced in carved polychrome figures which were mounted on the Rood screen that crossed the entrance to the chancel of the church.
Although the full-page illumination in the Missal is not a particularly fine piece of art, and the colouring and painted folds in the drapery of the figures are rather crude and clumsy, the sketching of the figures has charm. The detail does deserve some comment. The cross is a rough-hewn cross, typical of some English wall paintings of the crucifixion. The side of Christ is pierced, suggesting that the figure of Christ is now dead on the cross. Blood runs from the wounds in hands, feet and side, and the cross is mounted on a green hillock. Below the cross is placed a skull and other bones, locating the site of crucifixion as Golgotha, which in a literary tradition dating back to the 6th century, came to be identified as the place where Adam had been buried. But what is depicted here is more than death. The background is gold leaf, indicating that this crucified figure was divine. Furthermore the facing page is highly decorated, and this is more than mere decoration. The organic forms and the colours, red, blue, purple, green and gold leaf, not only highlight the solemnity of the words at this point of the prayer but also hint at the fruitfulness of Christ’s sacrifice, the defeat of death by death.