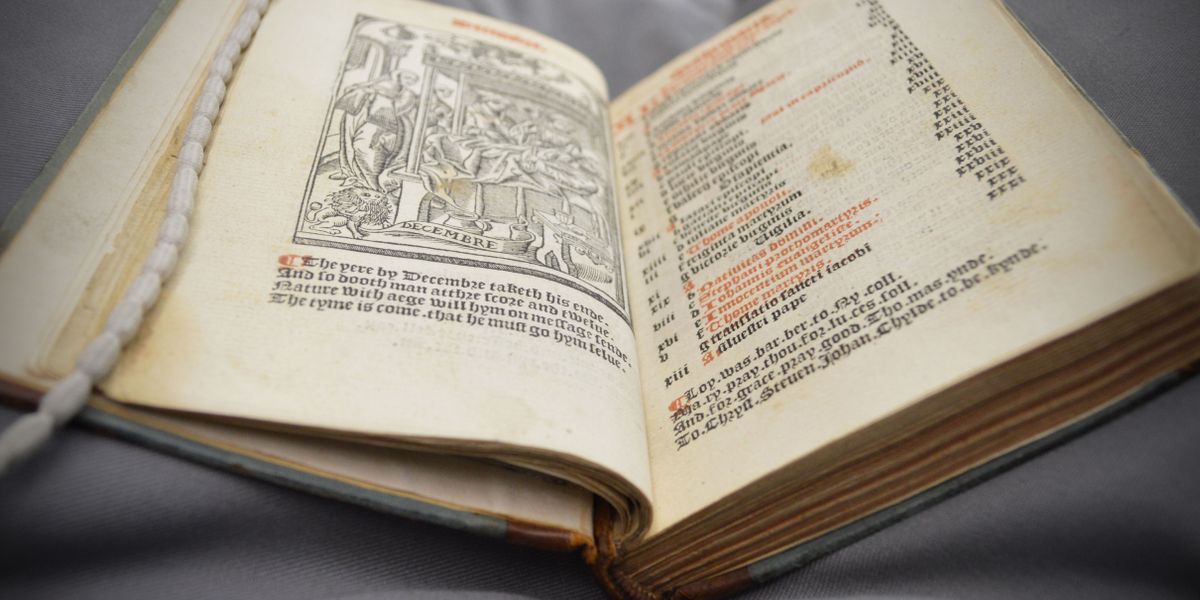 These two pages from a book of devotion certainly make an Advent Calendar with a difference. They were created in Rouen for the English market during the first years of Mary I’s reign (1553-58) and the kingdom’s brief return to Catholicism after the Protestant regime of her half-brother, Edward VI.

The scene opposite the December calendar page may seem a dour choice for a Christmas greeting, but read on to find why this image is really the essence of fulfilment, hope and renewal.

There is much happening in the image from the top, where the zodiacal sign of Capricorn counterbalances the lion holding the scroll at the bottom. The eye is drawn however, by the central scene of an elderly man on his death bed. Around his bed are two women and two men. A logical reading of the group would be, from left to right: wife, daughter/daughter-in-law, son and attendant cleric. Although the three family members show signs of grief through the position of their hands and downcast and heavy eyes, what is being shown here is, in fact, the best end that a Catholic man could have sought in the sixteenth century.

Reading the signs, materially, the man has been blessed with financial success in his lifetime as his bed chamber is well-appointed with good furniture and luxurious decorated and fringed bed-hangings. Additionally, his family are wearing high quality clothes, with his wife even sporting fur on her capacious sleeves. Furthermore, the man has reached a good age and is not being taken in untimely manner from his family. The poem beneath helps to explain that this is the natural order of things:

The year by December taketh his end,
And so doth man at three score and twelve, (seventy-two)
Nature with age will him on message (errand) send.
The time is come, that he must go himself.

Just as December sees the end of the year, so a man must leave his life, ideally having reached seventy-two years of age. Although we are possibly more attuned to the phrase of three score years and ten being the span of life (seventy years: Psalm 90 v 10), threescore years and twelve is used here as each month of the year represents a six year period, giving a total lifespan of seventy-two. From childhood in January and romance in April, this man has reached the fullest term of his life, ‘a good innings’.

More importantly still, the man is being eased from this phase of his existence in the best way possible, not only is he surrounded by his family, but vitally, he is attended by a cleric, recognisable by his tonsure and vestments. The cleric is administering the last rites, without which practising Catholics believed it was not possible to pass into heaven when the final judgement came.

The dying man is being handed a tall lighted taper to illuminate his path and the cleric holds an aspergillum in his right hand; this is a sprinkling brush with which holy water is applied to purify the dying man. On the table in the foreground are a round communion wafer and a chalice containing wine. This very last sacrament of the Eucharist is called the viaticum, a Latin word meaning ‘provision for a journey’ (literally via tecum: with you on the road/way).  Accepting the final Eucharist also means that the dying man will be strengthened to make the journey from this world to the next, being nourished with the body and blood of Christ.

Jesus and his Resurrection are symbolised by the lion in the foreground. Christian bestiaries maintained that lion cubs were born dead but came to life on the third day either from the breath of the father or the tender licking of the mother. In this way, lions became a symbol of Christ’s Resurrection on the third day.

Accordingly, life after death is exemplified in this scene and just as the year will begin again in January, so too will the man begin a new life after death. December, the joyous month of Jesus’ birth brings with it hope and comfort that mankind can now leave mortal life for salvation in the next…you see, it’s a happy Christmas picture after all!

By Jayne Wackett, Visiting Lecturer, University of Kent, Rochester Cathedral Historian and Editor of ‘Picture this…’

A very merry Christmas and happy new year to you from the ‘Picture this…’ team: Karen Brayshaw (Canterbury Cathedral Library), Cressida Williams (Cathedral Archives and Library), Jane Gallagher (Templeman Special Collections, University of Kent) and Jayne Wackett (University of Kent and editor) . Special thanks to all of this year’s contributors.