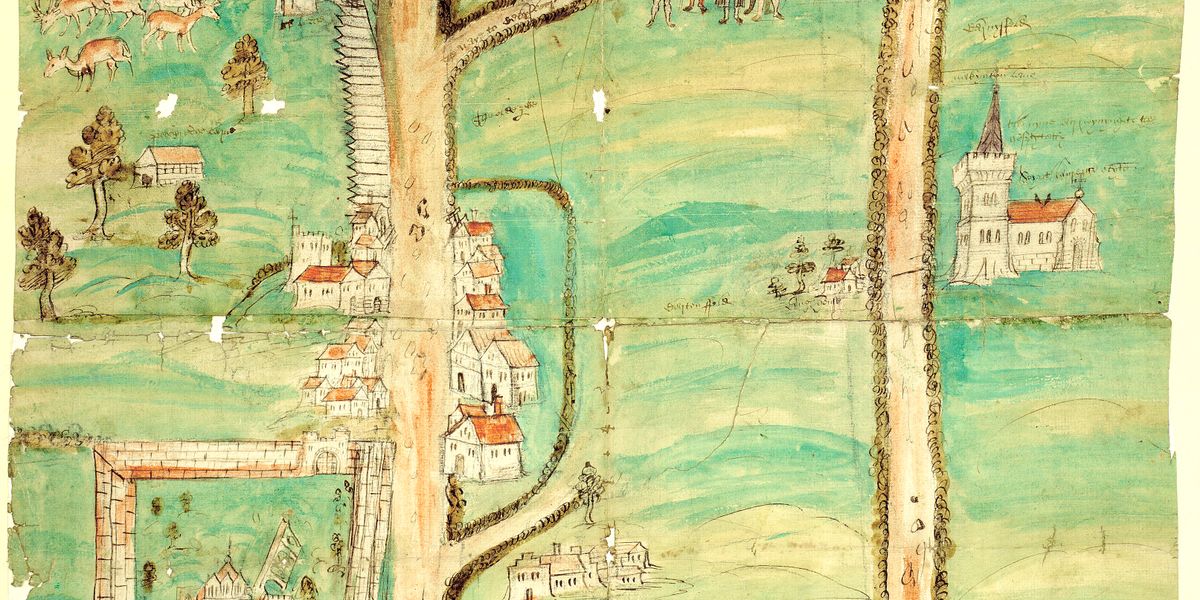 This month’s image shows a map of the eastern suburbs of Canterbury, Map/49, from the collections of the Cathedral Archives. The map is drawn in pen-and-wash on paper and is undated, but was probably produced in the later 16th century.

The eastern edge of the city is shown at the bottom of the image. The road to Sandwich runs vertically on the left, with the old Dover road roughly parallel to the right. The map shows the roads in plan, but around them are sketches of churches, houses, farm buildings and trees. Five men stand in a field, apparently surveying the landscape. As the Sandwich road leaves the city it passes St Augustine’s Abbey on the left, surrounded by a substantial wall, with St Martin’s Church beyond surrounded by houses; towards the top of the map is a large house known as Mote. St Paul’s Church and Barton Farm (formerly the home farm of St Augustine’s) are on the right; St Lawrence’s Hospital stands further right, beyond the Dover road. The drawings are not to scale and are impressionistic. Nonetheless, they are useful evidence for Canterbury’s historic landscape and built environment.

However, this map has particular significance for anyone with an interest in the history of deer-parks. Immediately beyond St Augustine’s Abbey next to the Sandwich road is a drawing of a deer-park, complete with park pale (perimeter fence) and even a herd of deer. The land had once belonged to the abbey, but after the Dissolution of St Augustine’s in 1538, King Henry VIII established a royal park there for his own use. Henry was an enthusiastic hunter; this was only one of many royal parks he frequented. The park was subsequently leased to aristocratic tenants and eventually sold, and part of the site was later used as barracks. The area is still known today as King’s Park.

Deer-parks were an important feature of aristocratic life in medieval and early modern England. Deer (usually fallow deer) were hunted for sport and bred for the table. Venison was a prestigious meat, served to important guests or given as a gift. However, maintaining a herd was expensive and difficult. Deer had to be confined within the park; they needed fodder in winter; poachers were a constant threat.

The map provides useful insights into the management of a sixteenth-century park. Good fencing was essential to keep deer in and poachers out, but constructing and maintaining an extensive perimeter fence represented a significant outlay. The map suggests that this park had a strong fence constructed from close-set vertical wooden stakes, too high for the deer to jump. A fence of this kind made a statement: it could intimidate local people who were not permitted to enter the park, and it signalled the owner’s wealth and status.

Responsibility for a royal park was a usually assigned to a keeper, often a high-ranking courtier or member of the local gentry. The keeper oversaw the management of the herd and the organisation of hunts, though he might assign day-to-day work to a deer-keeper. The map shows a building within the park, apparently timber-framed with a tiled roof, which would have served as the deer-keeper’s lodge.
The map suggests that the deer grazed on open grassland containing a number of mature trees. Deer benefited from shade, but their browsing could be destructive. Timber was an important resource and woodland on an estate was carefully managed. To reduce damage from deer, trees in a park would often be pollarded – the trunk cut at 8 – 12 feet above ground level – so that new growth was well out of reach.

Images of medieval or early modern deer-parks are rare. This map, with its colourful and engaging drawings, is attractive to look at, but it is also an invaluable visual resource for anyone wanting to understand how early deer-parks were managed.

R. Helm and S. Sweetinburgh, ‘The Home Farm of St Augustine’s Abbey, Canterbury, Before and After the Dissolution’, Archaeologia Cantiana Vol. CXXVIII (2017), pp. 65-88

More information about this deer-park and the management of parks generally in Kent can be found in: S. Pittman, Elizabethan and Jacobean Deer Parks in Kent (PhD thesis, 2011, available at www.kentarchaeology.org.uk/17/01/2013/06/000.htm).