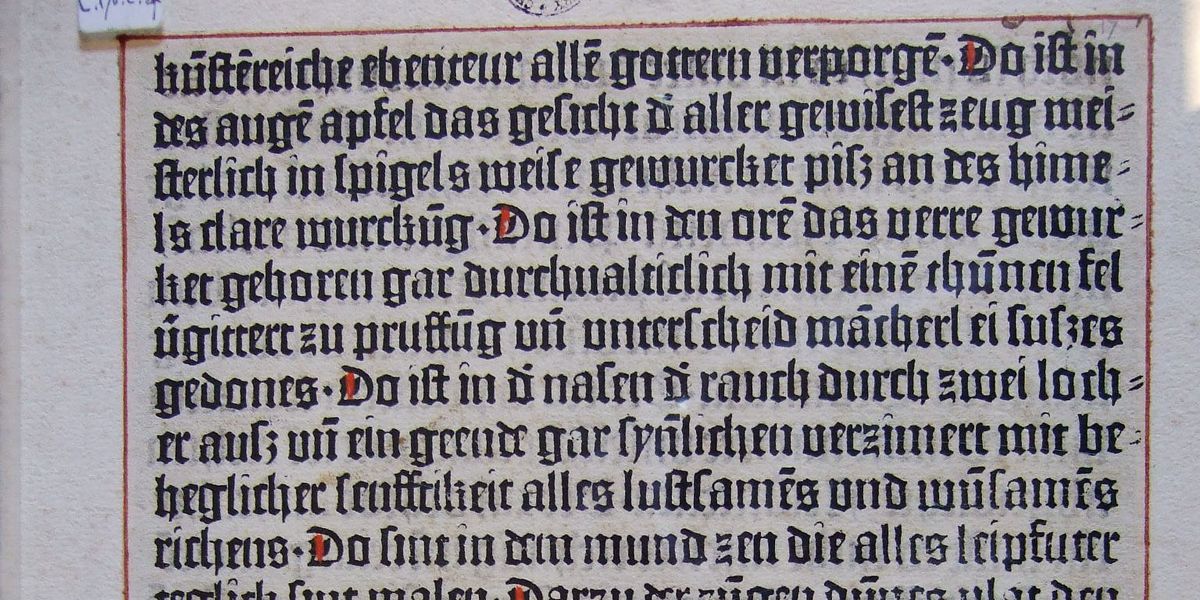 This month’s image is of the earliest printed item in the Dean and Chapter’s collections.

Books printed from the invention of printing (c. 1455) up to the year 1500 are known as ‘incunables’ (from the Latin incunabula because this period was the ‘cradle’ of printing). Libraries are always proud of their holdings of fifteenth-century printing. There is a long-standing dispute between the British Library in London and the Bavarian State Library in Munich as to which has the largest collection of incunables in the world. (London has the most separate editions, but Munich has the most individual copies). Canterbury Cathedral has a small collection of about thirty incunables, with another six or eight fragments.

One of these fragments is the oldest printed item in the Cathedral’s collections. It is a single leaf from an edition of a medieval German text known as the Ackerman von Böhmen, (‘The Ploughman from Bohemia’, also called Der Ackermann und der Tod, ‘The Ploughman and Death’), in which a ploughman debates with Death over the recent death of his wife. This work, originally written about 1400 by Johannes von Tepl, is one of the earliest books to have been printed in German and also to have printed woodcut illustrations. The date of the first edition is unknown; it is thought to date from c. 1463, but there is another edition which has been dated to either 1460 or to 1470. Our fragment comes from this 1463 edition.

This single stray leaf was found in about 1980 along with other bits and pieces in a manila folder on top of a cupboard in the Cathedral Library during the project funded by the British Library to catalogue the Cathedral’s books printed before 1801. It was clearly an early piece of printing. How could we find out what it was? Identifying its printer was relatively easy, as the type was recognisable being similar to the one used by the inventor of printing, Johann Gutenberg, for his 42-line Bible, probably printed around 1455. Very few items were printed in the 42-line Bible type and it was clear that our leaf was not from one of them. The gothic type in our leaf has a very similar design and was used in Mainz or Bamberg in around 1458/1460 to print the 36-line Bible, which is the second Bible associated with Gutenberg (though it is not at all clear that he was its printer). This second typeface is in fact associated with another very early printer, Albrecht Pfister, who worked in Bamberg, possibly in conjunction with Gutenberg, in the early 1460s. There are only ten works known to have been printed by this press, so it was (relatively) easy to make an identification of the fragment as part of the Ackerman von Böhmen printed probably in Bamberg, probably by Pfister, probably in 1463.

This discovery caused great excitement, as few British libraries owned anything printed by Pfister. The British Library has a copy of the 36-line Bible but nothing definitely attributable to Pfister’s press. In view of the British Library’s lack of any Pfister material in their collections, the Dean and Chapter decided to deposit the leaf with them in London. For many years it lived in a display case devoted to Gutenberg and his successors in the King’s Library at the British Museum before the British Library moved to its present site on Euston Road. The leaf returned to Canterbury in 2010.

How did this leaf come to be in the Cathedral Library? To try to answer this question, we have to look at what else survives of this 1463 edition of the Ackerman von Böhmen. The two standard sources (the Incunabla Short Title Catalogue at the British Library (http://istc.bl.uk), and the Gesamtkatalog der Wiegendrucke maintained by the Staatsbibliothek zu Berlin) know of only three more-or-less complete copies of the book, in Berlin, Paris and Wolfenbüttel. All the other records are of stray leaves like the one in the Cathedral Library. These all seem to have come from a defective copy originally in the Carmelite convent in Würzburg1 which was broken and sold in the first half of the nineteenth century. The surviving leaves are ff. 14–24. The Canterbury leaf is f. 17; other leaves are in the Stadtbibliothek, Bamberg, the Ashmolean Museum, Oxford, the Lilly Library at Bloomington, Indiana, the Scheide Library at Princeton University, New Jersey, the John Rylands University Library at Manchester, and the University of Texas at Austin2.

Although this suggests that our leaf came from Germany in the early nineteenth century, it still does not explain how it found its way into a manila folder in the Cathedral Library. The probable purchaser was William Howley (1766–1848), Archbishop of Canterbury from 1828,3 part of whose collections was inherited by his former chaplain, Benjamin Harrison, who was Archdeacon of Maidstone and a Canon of Canterbury Cathedral from 1844 and whose widow left his considerable library to the Cathedral in 1887. The Howley-Harrison Collection is the source of a number of the Cathedral’s incunables.

A facsimile of the Wolfenbüttel copy of this first edition of the Ackerman von Böhmen was published in 1919. It has now been digitised and can be viewed online.4 The pages which match the Canterbury leaf are images 37 and 38 at this site. The copy at the Bibiothèque nationale de France has also been digitized.5 The Canterbury copy has been lightly decorated by (or for) an early owner: a red line framing the page, a hand-drawn initial S, and flicks of red ink on many capital letters. Other leaves from the same source show similar decoration.6