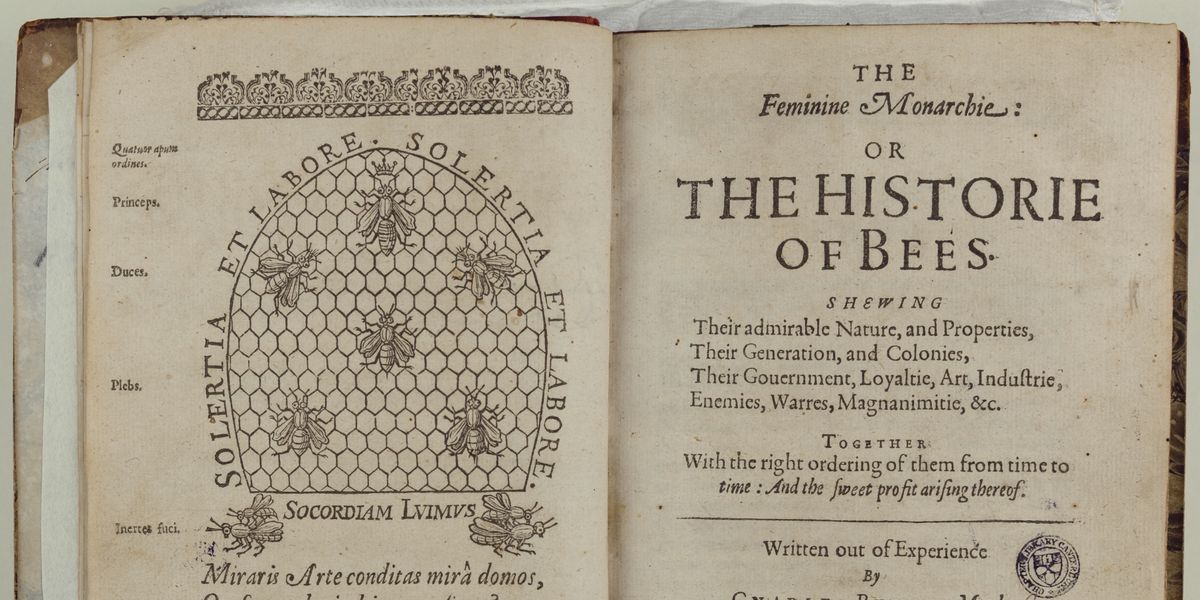 This month’s submission is by Dr Diane Heath, co-editor of ‘Picture This…’, lecturer at Canterbury Christ Church University. Queen Bees may now be hibernating, but this article is still topical because of the forthcoming Garden History Study Day on 7th October.

Charles Butler, The Feminine Monarchie: Or the Historie of Bees (London: 1623)

The Rev. Charles Butler (1560-1647), Oxford scholar and vicar of Wootton St Lawrence, Hampshire, for nearly fifty years, was the first English writer to publish on bee-keeping. His 1609 work, The Feminine Monarchie or The Historie of Bees, was an immediate success, and remained unsurpassed in the field until the nineteenth century. Canterbury Cathedral Library holds copies of each of the three early editions (1609, 1623, and 1634) of Butler’s text, which reveals the wonderful world of late Elizabethan and Jacobean political culture and natural science.

From King Bee to Queen Bee

Butler pointed out that although Aristotle had thought that the hive ‘governor’ was male, bees are indeed ‘ruled’ by a queen. Parallels with the feminine monarchy of the late Queen Elizabeth I are implicit in the title of Butler’s book, and early modern bees were regarded as political as well as productive insects.

This is demonstrated in the tabulated illustration preceding the frontispiece in the 1623 and 1634 editions, entitled Solertia et Labore (skill and industry). The hexagonal honeycomb is adorned by six bees with two pairs of bees below to indicate Butler’s hierarchy of four types: the princeps (ruler), indicated by a tiny crown; duces (leaders or dukes); plebs (commoners or honeybees); and inertes fuci (weaklings or drones), which together formed an insect microcosm of the most perfect form of government – a monarchy and commonwealth.
The 1634 edition of Butler’s book is dedicated to the ‘Queen of England’, praising her ‘beauty, majesty, temperance, chastity, prudence, taciturnity, and other Princely feminine graces’, noting the Queen Bee ‘marvels to see herself surpassed’ emphasising the bee as a symbol of royal virtue and civil monarchy. In 1634 the Queen was Henrietta Maria, wife of Charles I, yet the panegyric might also be read in memoriam for Elizabeth I and thus a message from the Queen Bee to Good Queen Bess.

Butler’s 1623 and 1634 editions include a four-part bee madrigal, Melissomelos (with some of the parts printed upside-down so four people could sing from the one book). The lyrics praise queenship: ‘Of all the states the monarchie is best, So of all Monarchies that Feminine, Of famous Amazons excels the rest’; he even added sounds to resemble honeybee ‘piping’. A beautiful recording of Melissomelos has been made by the Choir of Little St Mary’s, Cambridge: https://www.youtube.com/watch?v=p2eonteQEps.

Aptly, the madrigal was sung in Wootton St Lawrence church on the dedication of a stained glass window in 1954 to mark Queen Elizabeth II’s coronation. The stained glass depicts the solertia et labore honeycomb from the frontispiece of Butler’s book.
Butler lauded the sovereignty of the Queen Bee and the industry and utility of her honeybees. He gave beehives pride of place in his garden, carefully fenced and planted with ‘plumtrees, cheritrees, apletrees, filberds, hazels, thornes, roses, &c…a lavender border, or the like’ (chapter 2, section 5); his bee-garden would have been a pleasant place indeed.

The forthcoming ‘Garden History Study Day’ at Canterbury Christ Church University will focus on Butler’s contemporaries, the Tradescants, Canterbury’s world-renowned gardening experts. It will be a pleasure to welcome Jayne Wackett, previous editor of ‘Picture this . . .’ who is giving a lecture on garden history, and Karen Brayshaw who is presenting a selection of garden books from the Cathedral library’s wonderful collection. Do please join us – https://www.canterbury.ac.uk/arts-and-culture/event-details.aspx?instance=135603