Between Paris and Canterbury: the Lyghfield Bible 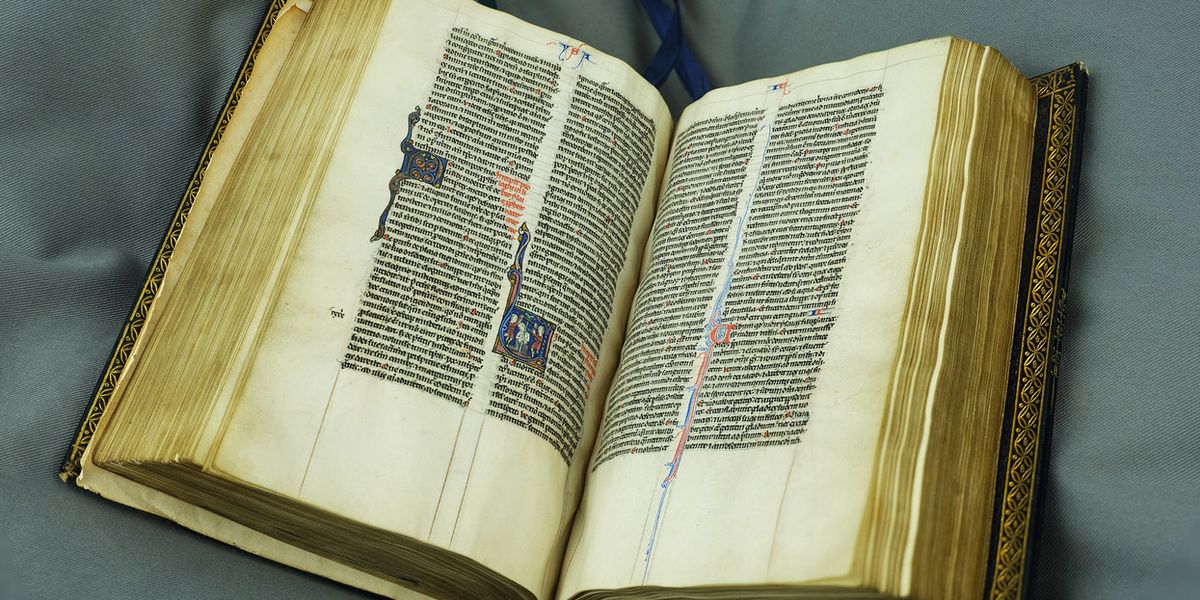 It is not often that a new complete manuscript enters the ownership of an ancient institution, particularly when ‘new’ means later thirteenth-century. When an elegant pocket Bible with known Canterbury provenance came up for auction in the summer of 2018, the Cathedral was successful in its bid for it, thanks to support from generous donors. As a result, the Bible returned to a city it already knew well, and the Cathedral Archives became the possessor of a volume which is beguiling small (c. 173 × 112mm) but substantial (at 590 folios and weighing 700g) — you would have had to have capacious pockets to carry it. It is undeniably a work of impressive craftsmanship. More than that, though, it acts a gateway through which we can glimpse both a particular moment in the history of Christianity and some of the international connexions that defined medieval Canterbury.

The Bible as we know it — presented as a single volume on thin material, in two columns, with a defined order of books, each subdivided into chapters — is an invention of the thirteenth century, and the Lyghfield Bible is a witness to that development. Before that century, whole-Bible manuscripts (pandects) were rare because they had to be so large and so heavy — they certainly were not portable, as anyone who saw the Codex Amiatinus in the Anglo-Saxon Kingdoms exhibition can testify (weight: 35kg). Two technological changes helped create the new style: first, a technique of preparing parchment which allowed it to be very thin (the forerunner of ‘Bible paper’); second, the construction of a new bookhand which could compact many words onto a page by forming tiny letters (in the Lyghfield Bible, the height of a letter with an ascender is 1.75mm); because of its delicacy, the writing is sometimes called ‘pearl script’. There were also intellectual developments that defined and permitted the new form of Bible. They had their associations with Canterbury because the apparent inventor of the ordering of books and their division into chapters was Stephen Langton, who ended his career as archbishop of Canterbury (1206-1228). Langton had, though, previously studied and taught in Paris, and it is with that metropolis that the new style in general and the Lyghfield Bible in particular was associated.

Paris was the largest city of northern Europe in the thirteenth century, outstripping anything in its neighbour across the Channel. In England, the administrative and economic centres sat close to each other but in the separate cities of Westminster and London. Neither of those could stake a claim to primacy in education — that accolade was held by Oxford — while the acknowledged religious centre of the nation was Canterbury, enhanced by the established cult of Thomas Becket. In France, the roles of administrative, economic, educational and, to a large extent, religious centre were combined around the islands in the Seine which were the heart of Paris. These elements were meshed together — a university was a religious foundation intended for teaching the clergy — but they could also be in conflict with themselves. For instance, early in the thirteenth century, the teachings of Thomas Aquinas which incorporated the thought of Aristotle into Christianity and which were promoted by his fellow Dominicans, were condemned by the University of Paris, only for Christian Aristotelianism to become central to its teaching later in the century.

This social and cultural vibrancy made the city a premier location for book production but they also raise a quandary about the Lyghfield Bible: from which of its many milieux does it emanate? There are several elements which are suggestive. One of these is a single piece of marginalia, hidden in the inner margin of fol. 270. Next to Proverbs 4.7, the scribe adds: ‘virtus generata ex operabus principium editum op. 2 ethi. ca. 2’; that is ‘virtue is created out of works’, with a cross-reference to the Ethics of Aristotle. This places the scribe and his work within an educational setting, influenced by the fashion for the tradition championed by Aquinas — a tradition which had been suspected of heresy now being literally inserted into the Bible.

The intellectual ambitions of this small Bible are suggested by another detail. Among the many illuminated initials of the volume, there are some in which the prophet whose book follows holds a scroll, giving his name. On one occasion, that name, Amos, is written in an attempt at Greek letters (fol. 396va: λογοι Aμως). That the artist only attempted it once may suggest this was at the very limit of their ability, but, at the same time, it does imply a context in which a knowledge of Greek, however rudimentary, was prized.

There is a further implication: this Bible emanates from the circles of the fashionably educated in Paris and it is certainly too beautiful and thus too expensive a volume to have been made for or bought by an impecunious student. That insight might, indeed, help explain how this Parisian product came to live in Canterbury. Other marginalia in the volume show it arrived in England by the early fourteenth century at the latest. The most plausible explanation for its move from one European locale to another is that it was made for one of Stephen Langton’s intellectual successors, a scholar visiting Paris from England with the means and position to purchase an elegant Bible to be carried on his person (we must assume a man). What better memento of one’s time in the acknowledged centre of education and book-production than this, a book to cherish but also to show to colleagues in Canterbury?

This brief discussion by no mean exhausts the possibilities for research this manuscript allows. Some of those avenues were pursued further at a workshop at the University of Kent, organised by Drs David Rundle and Emily Guerry on the afternoon of 4th March 2019, ahead of the Cathedral’s Annual Archives lecture, by Dr Alixe Bovey that evening. For anyone who missed the workshop, MEMS students Jessica Schwindenhammer and Cassandra Harrington share their reflections on the afternoon’s sessions in articles published on the MEMS blog.