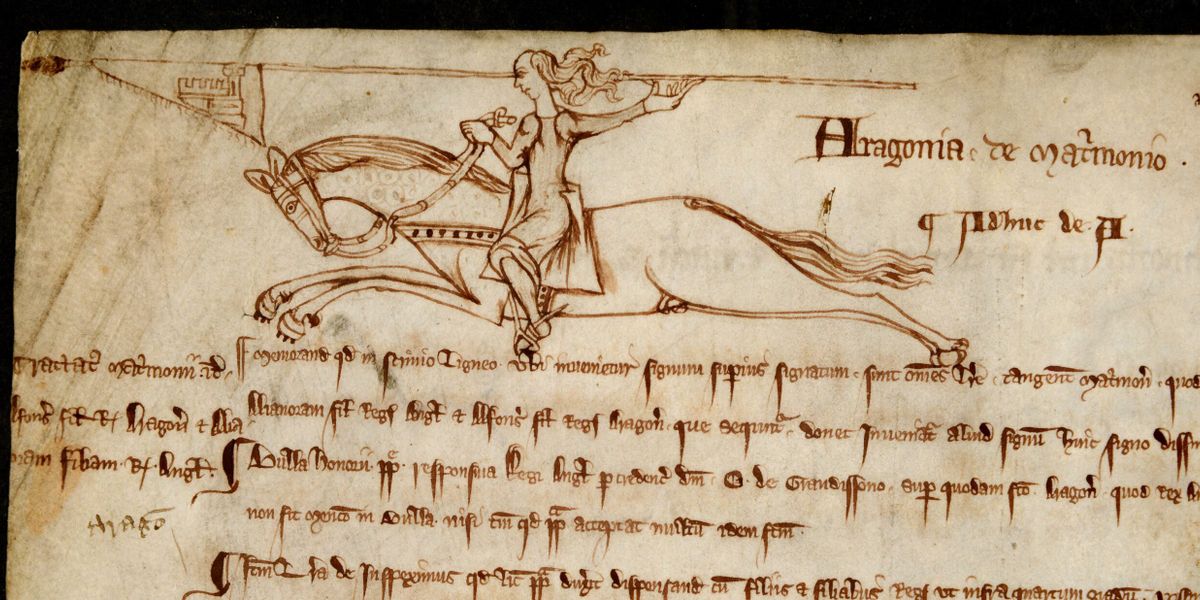 The cult of the martyred St Thomas Becket took many forms across medieval Europe. The saint’s image proliferated and was reshaped by its application in new contexts: in wall paintings, stained glass, pilgrim badges, illuminated manuscripts and also on seals, as Professor Anne Duggan splendidly demonstrated in her December post for this blog on the counterseal of Archbishop Stephen Langton. Artistic representations of Becket in archival collections are not limited to these formats, though. Tucked away in what is known as ‘Liber A’ in the archive of the medieval Exchequer – the financial arm of royal government – is this rather grisly doodle depicting the martyrdom. As the sword pierces the skull of the tonsured, bearded and robed archbishop, the mitre is toppled from his head, though the saint holds his hands forward in blessing, an image reminiscent of the scene depicted on Langton’s counterseal.

The doodle is found in one of the most important works compiled and retained for permanent reference by the Treasury of Receipt in the Exchequer, the repository for royal valuables and records housed, mainly, in the Chapel of the Pyx and the Chapter House of Westminster Abbey.

It is essentially a pictogram, an aide-memoire and visual point of reference for the Exchequer clerks in a volume compiled for King Edward I (ruled 1272-1307) between c.1282 and c.1292. (Liber B contains transcripts of records from c.1292 to c.1305.) It is one of several such pictograms that give readers a clue to the contents of the varied sections of the book. The doodle is not particularly unusual either; throughout the corpus of English medieval records we find numerous examples of heads, mythical beasts, hands and crude sketches that act in some way as references for the clerks who managed the information contained within them.

Sections of Liber A include papal bulls, letters, treaties and other muniments relating to England’s relationship with Scotland, Wales and Ireland and to royal marriages (including the doomed betrothal of Edward of Caernarfon, the young heir to the English throne, and Margaret, the ‘Maid of Norway’, heir to the throne of Scotland who died on voyage to her kingdom in 1290). It also contains transcripts of statutes of the realm and documents relating to ecclesiastical privileges and the relationship between Church and State.

The Becket doodle is found at the head of a two-folio (ff. 296r-297v) transcript of the proceedings of John Peckham, Archbishop of Canterbury, in a provincial council of bishops held at Reading in June 1279. Peckham was a Franciscan friar who had built up a powerful intellectual reputation studying and teaching at the universities of Paris and Oxford. His appointment as Archbishop of Canterbury in January 1279 brought him into closer contact with secular administration and also emboldened him to continue and enhance the legislation of earlier in the century that aimed to ensure the Church had the human resources and the licence to minister effectively throughout the nation.

The transcript in Liber A lists the ‘constitutions’ promulgated at Reading. These regulated such life events as baptism and concubinage (co-habiting of men and women who are not legally married). Peckham further aimed to tackle the issue of institution to church offices and pluralism, the possession of multiple benefices by clerks and their non-residence in their parishes.

Some bishops and many royal clerks were instituted to several offices and did not look kindly on the statutes, and the government used pluralism as a way of rewarding its personnel. By the end of 1279 Peckham had excommunicated anyone resisting the Reading statutes. Parliamentary opposition forced Peckham to back down to some degree and agree that none of the statutes would prejudice the king or his kingdom.

Medieval government clerks are known for their sense of humour, which is best revealed through their doodling. Here in this tiny doodle, no more than a couple of centimetres in height and width, we have a conundrum. Yes, the drawing is clearly that of Thomas Becket. But are the Exchequer clerks using the powerful image of his martyrdom to remind themselves of the enduring clerical struggle against secular power, or is the artist perhaps cocking a snook at his legacy so recently encapsulated in the activities of John Peckham, whose death in 1292 coincided with the possible end date for the compilation of the volume?

M. Morris, A Great and Terrible King: Edward I and the forging of Britain (London, 2008).