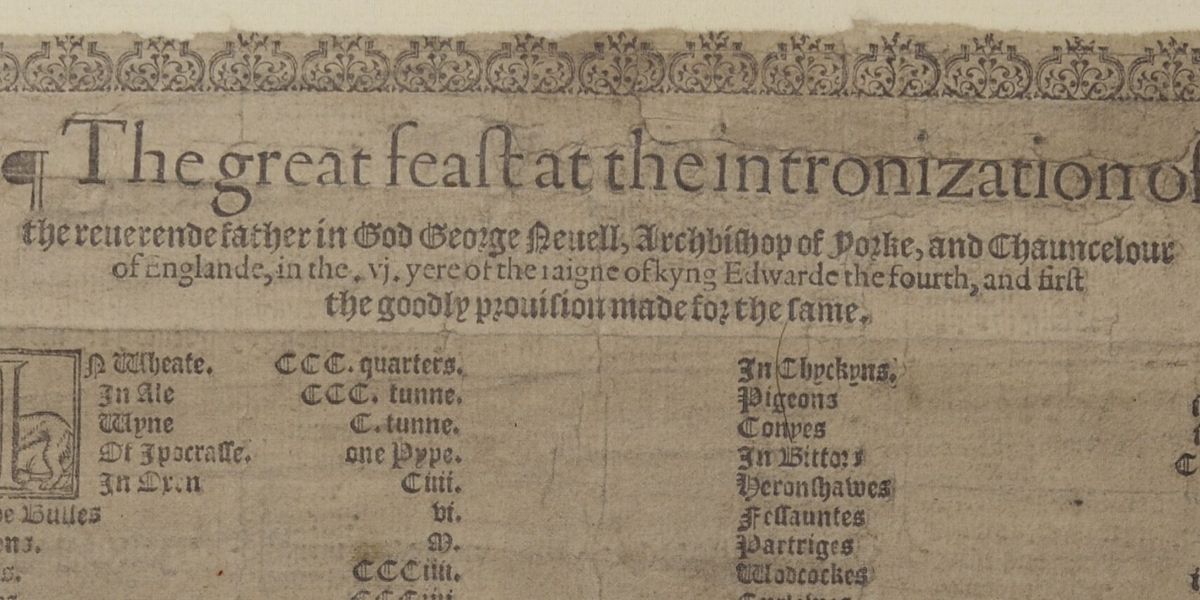 Picture This… April 2022: The Great Feast at the Intronization of the Reverende Father in God George Neuell, Archbishope of Yorke and O quantum in rebus inane. Intronizatio Wilhelmi Warham (J. Cawood, 1570?)

April’s Picture This… is written later in the month to coincide with the 80th anniversary of the enthronement of William Temple as Archbishop of Canterbury on 23rd April 1942, while the country was at war.

With this in mind, we turn our attention to a paper scroll printed in about 1570 held in the Cathedral Archives and Library. This records the feasts marking the enthronements of two archbishops in the fifteenth and sixteenth centuries, occasions when food rationing certainly wasn’t a consideration. The first feast was held after the enthronement in 1465 of George Neville as Archbishop of York. The feast was held in Cawood Castle, North Yorkshire, the palace of the Archbishops. The second marked the enthronement of William Warham as Archbishop of Canterbury on Passion Sunday, 9th March, 1504 in the Great Hall of the Archbishop’s Palace in Canterbury.

The scroll is printed double-sided on sheets of paper pasted head to foot. It awaits full collation with other printings of the two texts as well as addition to the English Short Title Catalogue maintained by the British Library. The Neville text is complete, printed on five sheets of paper, in total measuring 168cms (about 5ft 6in) in length. The Warham text is incomplete, with six sheets remaining. The ESTC records two examples of the Neville text and three examples of the Warham text; only one of the items currently on the ESTC combines both texts, held at the Bodleian Library in Oxford. The Bodleian copy of the Warham text is complete, amounting to eleven sheets, and including the quotation at the head of the text ‘O quantum in rebus inane’, which has been attributed as a title in the ESTC.

The printer of the scroll has been identified as John Cawood (1513/14-1572). Cawood was from Yorkshire, of unknown parents but from a family originating from the town of Cawood. He was apprenticed to the London stationer and bookbinder John Reynes, and became Royal Printer in 1553, under Queen Mary. He was Master of the Stationers Company in the 1560s and a benefactor to the Company.

This feasting scroll is a curious piece of printing. The reasons for its production are not clear. A near-contemporary manuscript note on Lambeth Palace Library’s copy of part of the Warham text claims that the item was commissioned by Matthew Parker, Archbishop of Canterbury from 1559 to 1575. Parker had spent large sums in the 1560s on repairs to the Palace in Canterbury, making it fit for lavish hospitality; one reason for commissioning the scroll may have been to justify this. Parker entertained Queen Elizabeth I with a splendid feast in the Great Hall on 7th September 1573, to mark her 40th birthday.

In the cases of both enthronement feasts, details of the ceremony are described, as well as a description of those attending and the foods served. The Neville feast lasted several days with 2,500 guests attending each meal, one of whom was Richard, Duke of Gloucester (later King Richard III). Over the course of the feast, guests consumed vast amounts of food and drink including 400 swans, 104 peacocks, 2,000 chickens and 300 tuns of ale, equivalent to 72,000 gallons today. Neville (1432–1476) was the son of the fifth Earl of Salisbury and of royal blood through three lines; his feast was clearly designed to impress and influence.

William Warham (1450?–1532) came from a less wealthy background; nevertheless, his feast came close to the grandeur of Neville’s. It was held over two days and was attended by important figures of Church and State. A wide variety of fish dishes was served, because the feast fell during Lenten fast days. These dishes included salmon, pike, carp and ‘Fryttor Dolphin’ (dolphin fried in batter).

Subtleties (which were elaborate showstoppers made with sugar to entertain and impress the guests) were presented after each course and are fully described. One subtlety is described as being in three parts, depicting Warham’s presentation to St Paul by King Henry VII and his queen, Elizabeth, his consecration, and his enthronement.

Cawood uses a standard black letter type, or gothic textura, for the main text, using two sizes. This angular type derived from manuscript book-hands. Roman type is used for headings and for Latin used in the Warham text. This type was developed in Italy at the end of the fifteenth century, based on the lettering of classical inscriptions, and spread north through Europe. There are also a few instances of italic type, which was first used in Italy at the beginning of the 16th century, developed from a handwriting style. To add visual interest, and to introduce new sections, Cawood includes in the Neville text two decorated initial letters with a lion and an elephant enclosed within squares.

The borders of the printing are made up of printers’ flowers or ‘fleurons’ joined together. The use of the device makes a different pattern on the horizontal and the vertical borders, as can be seen on the heading for the account of the Neville feast. Presumably Cawood chose the scroll format as a deliberate archaism, despite the challenges it presented for consultation. The original records of the feast may have been written on scrolls. The layout of the texts is reminiscent of manuscript mise-en-page. The wear and damage to the item over time the centuries is an inevitable result of the scroll format. It has certainly been at the Cathedral since at least the mid seventeenth century, as the antiquarian William Somner (died 1669) consulted it here, as mentioned in his Antiquities of Canterbury. It does not appear in earlier catalogues of the printed book collection, presumably because of the scroll format and its ephemeral nature. It seems likely that copies in other collections may similarly have escaped the eyes of cataloguers and scholars.