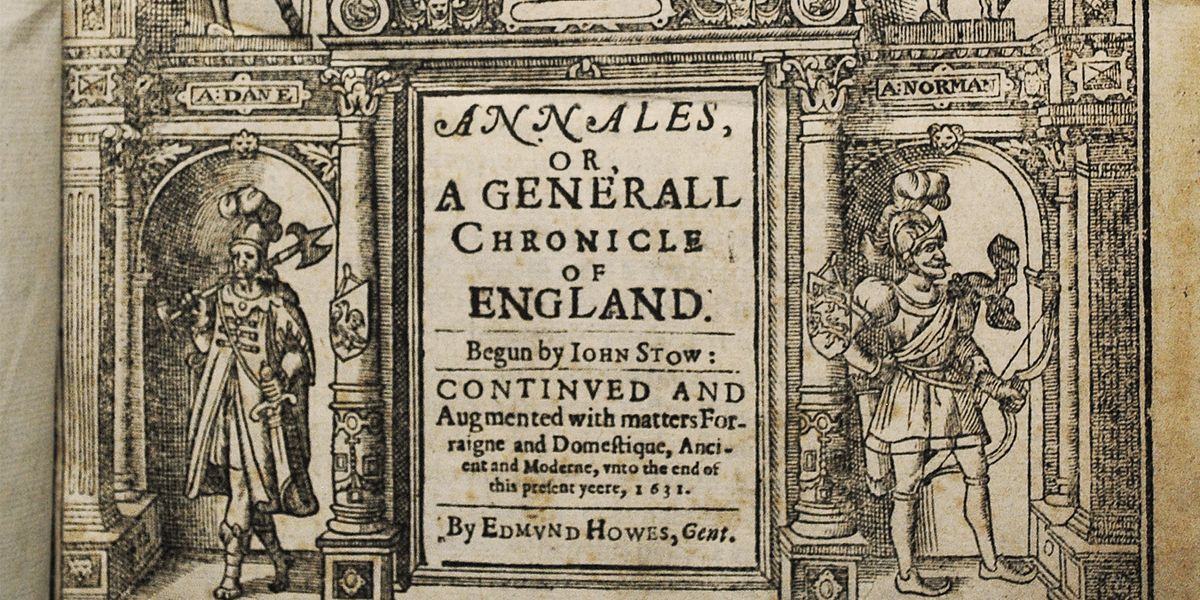 Image dominates word on this frontispiece to this 1631 edition of Stow’s Annales (Templeman Library Special Collections). It was created in the architectural style of title-page decoration which had spread from Italy in the late 15th century. Invoking classical motifs, the design allocates peripheral spaces to the figures of a Roman, a Saxon, a Norman and a Dane around the imposing centrepiece of the royal coat of arms, topped with images of King Charles I, Queen Mary and Prince Charles (later Charles II). While still clearly legible, the title of the work is relegated to the space at the bottom of the page. This use of architecture suggests something of the triumphal, as well as a monumental aspect to the design. While Stow (1524/5-1605) had predeceased this edition by 25 years, his posthumous editor evidently considered some monument to the chronicler’s work was an appropriate introduction to the Annales for the reader.

John Stow was a prolific chronicler of the 16th century and most likely a self-taught man. His most famous work is the Survey of London, a ward by ward perambulation of London with explanations of the history of the city. Although he would complain later in life that he made no money from his historical works, Stow had clear business acumen, releasing new editions of his major works every few years, as well as abridged versions aimed at those with lower incomes or those who wanted a quicker read. Stow was known for his studious attention to accuracy, lambasting his contemporaries when he felt that they had not paid proper attention to the sources, or worse, plagiarised his work. The Annales, the last of his major works, was printed in a number of editions, including five editions after his death, all of which were ‘continued and augmented’ by Edmund Howes, Stow’s literary executor.

This 1631 edition was the last of the Annales to be printed by Howes, but its monumental introductory image closely mirrors the frontispiece for the 1615 edition, which includes the same devices,

differing only in the depiction of the royal family. In the earlier edition, James I is shown in the centre, with Queen Anne on his right and Prince Charles (later Charles I) on his left. The images of the king and the prince have changed in the 1631 edition, but the image of the queen remains the same. The changes reflect technological advances in engraving and printing, which enabled the publication and circulation of recent images of individuals, particularly monarchs. By updating these images in 1631, Howes ensured that his readers knew that this edition included new and modern content, superseding the earlier edition and giving it an edge in the competitive marketplace for chronicles which had developed during the 15th century.

For all the attempts at modernity, the frontispiece to this book is not quite as honest as it seems. It is, in fact, a rather close (and lower quality) copy of Jodocus Hondius’ engraving for the 1611 edition of John Speed’s History of Great Britain. This finely executed piece, carried out by the Flemish engraver whose work was admired across Europe, arrays the figures of the Roman, Saxon, Norman and Dane in an ornate architectural setting around the imposing figure of ‘A Britaine’, below which sits the title, in the lower central frame. The first use of this image for Stow’s Annales came only 4 years later, with the addition of the royal family along the top of the monument, surrounded by a fretwork of thistles and roses, and the addition of the royal crest in place of Hondius’ ‘civilised’ (ie. clothed) Briton.

While it is surprising that such blatant copying passed relatively unaccounted, particularly when these were both works of history which presumably appealed to similar audiences, the minor

changes to the design reveal interesting aspects to Howes’ augmentations to Stow’s legacy. As a self-made scholar, Stow amassed a significant library, but during the early decades of the Elizabethan Church the potentially Catholic nature of some of these works, along with alleged Catholic sympathies, brought Stow to the attention of the authorities. While he escaped relatively unscathed, with none of the accusations against him proven, he remained bitter about the experience until the end of his life. No doubt aware of this controversy, Howes may have used the design of staunchly Protestant Hondius to emphasise the point, while the inclusion of the royal images and insignia added extra authority to the frontispiece and thus, implicitly, to the content.

More curious, perhaps, is the supplanting of ‘A Britaine’ with the royal arms: it seems unlikely that Stow’s personal disdain for the Welsh and Irish would have influenced a later design. However, with the accession of James I, the crowns of England and Scotland had been united (a fact neatly alluded to in the fretwork of English roses and Scottish thistles at the top of the monument), so Howes could now represent all Britons in the combined arms of the monarchy. This would further emphasise the authority in Stow’s work, but also neatly demonstrate how the book showed the history of the British people, leading directly to this union which linked both people and loyalties to the Crown.

During his lifetime, Stow wrote of his commitment to inform the people of their past for the good of the kingdom, and to historical accuracy, but his multiple updated and abridged editions also became a stalwart of the 16th century book market. In seeking to continue Stow’s legacy, Howes imprinted both authority, loyalty and modernity into these works by the adoption and adaption of an existing frontispiece to present an image of a Britain united around a truly British monarchy.

Jane Gallagher, Liaison Librarian (Humanities), University of Kent
With thanks to Kirsty Wallis for photographs and contributions
Editor: Jayne Wackett
Note from the Editor: Hearty congratulations to Jane Gallagher, erstwhile of the Templeman Library and regular contributor to ‘Picture this…’, on her appointment to Manchester’s John Rylands Library. Their gain is our loss, although the below article is her parting gift to us….less fattening than cake, but still very rich. Meanwhile, I’m desperately trying to think of a joke beginning ‘A Roman, a Saxon, a Norman and a Dane go into a pub…’