A Stained Reputation: Thomas Becket in the Chapter House Windows 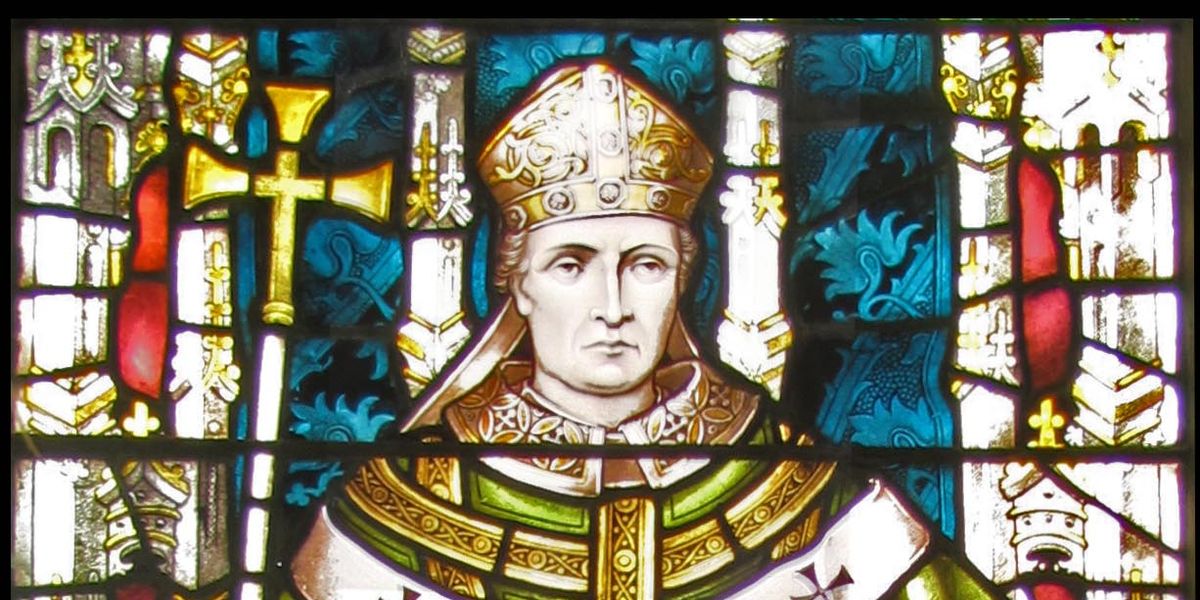 In this month’s ‘Picture This…’ we are taking a look at the Chapter House of Canterbury Cathedral. Originally, the Chapter House was the meeting place in which each day the Benedictine Rule was read to the monks of Christ Church and the business of the day was discussed.

When one enters the fourteenth-century Chapter House, the first thing that one notices will surely be the massive window that fills nearly the entire east wall. This window, a gift from the Freemasons of Kent in 1896, was made by Hemming and Co. Its installation came soon after restoration work on the Cathedral’s stained glass and is in the typical style for the late nineteenth and early twentieth centuries. It depicts 21 figures from the history of the Cathedral, from Queen Bertha of Kent (d.601), a key influence on the reconversion of early medieval Kent to Christianity, right through to Queen Victoria (1819-1901), the then reigning monarch. Of course though, with this being the ‘Picture This…’ year of Becket, we shall be focusing on this well-known saint.

In the glass, Becket (c.1119-1170), here labelled as ‘S Thomas a Becket’, is shown in rich vestments of green and blue, mitred, and carrying a cross-topped crozier in his right hand and the method of his death, a sword, in his left. Saints being pictured with the implements of their martyrdom is common in religious art, and is seen again in this window with the ox bones of Saint Alphege (c.953-1012), Archbishop of Canterbury between 1006 and 1012, who was clubbed to death by raiding Vikings after he refused to allow himself to be ransomed.

Becket is positioned next to the King labelled as Henry III (1216-1272), who is robed in purple with ermine trimming. Henry was present at Becket’s Translation in 1220, and was even painted on the ceiling of the Trinity Chapel ambulatory for the event as part of a sequence of as many as 72 portraits of saints, archbishops and kings. For this reason, Henry is flanked on his other side by Archbishop Stephen Langton (c.1150-1228), who presided over the Translation and who is credited with the modern arrangement of chapters in the Bible. The shield of arms depicted above Henry’s right shoulder, that of the three lions passant guardant still well known today, was only introduced by his uncle, Richard the Lionheart, in 1198.

I note this as there is debate over this panel, with some believing it to be Henry II (1133-1189), whose famous declaration of anger towards the Archbishop led to Becket’s bloody demise within the Cathedral on 29th December 1170. Henry II is certainly more relevant to the neighbouring Becket, and it could be argued that Henry III does not fit with the chronology of the figures, which were specifically chosen to give a clear overview of the entire history of the Cathedral. Henry became king after Langton’s appointment and he outlived Langton and Archbishop Edmund Rich (c.1174-1240), who is in the next panel along.

Perhaps the glassmakers of the east window chose to depict Henry III rather than the man who led to Becket’s death in order to demonstrate the reunion of the Church and the Crown after the rifts of Henry II and the disastrous reign of John. The makers of the west window made a different choice.

In 1903, less than seven years after the re-glazing of the east window, the west window was re-glazed as well. This window was paid for by public subscription and dedicated to the late Dean of the Cathedral, Frederic William Farrar, whose fundraising efforts had paid for the restoration of the Chapter House. It is a mirror of the window opposite, showing the same figures in the same order, but, rather than the static portrait poses of the east window, the figures in the west window are shown in their most famous acts. For Becket this is, of course, his martyrdom. Becket here is on his knees, simply dressed, and stoically praying as two knights tower above him, their swords raised and ready to strike. However, instead of the next panel depicting Henry III, it shows a king about to be beaten by the monks of Canterbury. This is Henry II, who performed a public act of penance on 12th July 1174 in Canterbury Cathedral in return for absolution for any part in Becket’s murder. The panel is a direct visual contrast to Becket’s murder, showing the penitent and shirtless Henry on his knees in front of the Archbishop’s tomb in the crypt, recognisable by the early English styling of its arches. Above him stand the monks of Canterbury, ready to strike him with rushes, an act performed three times by each of the monks and five times by each of the attending bishops.

It is unclear why the glaziers chose to depict Henry II instead of Henry III in this west window. It may have been because Henry III was only thirteen at the time of Becket’s Translation, and so the panel would have looked vastly different than the panel opposite. The only other important event for Henry III in the Cathedral was his marriage to Eleanor of Provence in 1236, and this was equally unsuitable, as depicting this would have muddled the chronology of the window. With Langton having died in 1228 and Henry III having no other noteworthy interactions with the Cathedral in this time, the glaziers may have been left in a bind by the other window, resulting in them showing Henry II’s penance instead.

In any case, the east window was installed just in time for the reception of the Prince of Wales (later King Edward VII, 1841-1910), when he and his wife visited the Chapter House for its grand reopening in 1897 as part of the celebrations of the 1300th anniversary of Augustine’s arrival in Kent. With its rich colouring, opulent aesthetic, and Victorian sensibility, these windows tell us much more about the Victorians who designed them than the figures they depict. The window surely must have served as a striking centrepiece, impressing on the future king the history and prestige of Canterbury as well as the power that it once held (and continues to hold) as England’s prime cathedral.