A Seal of Power 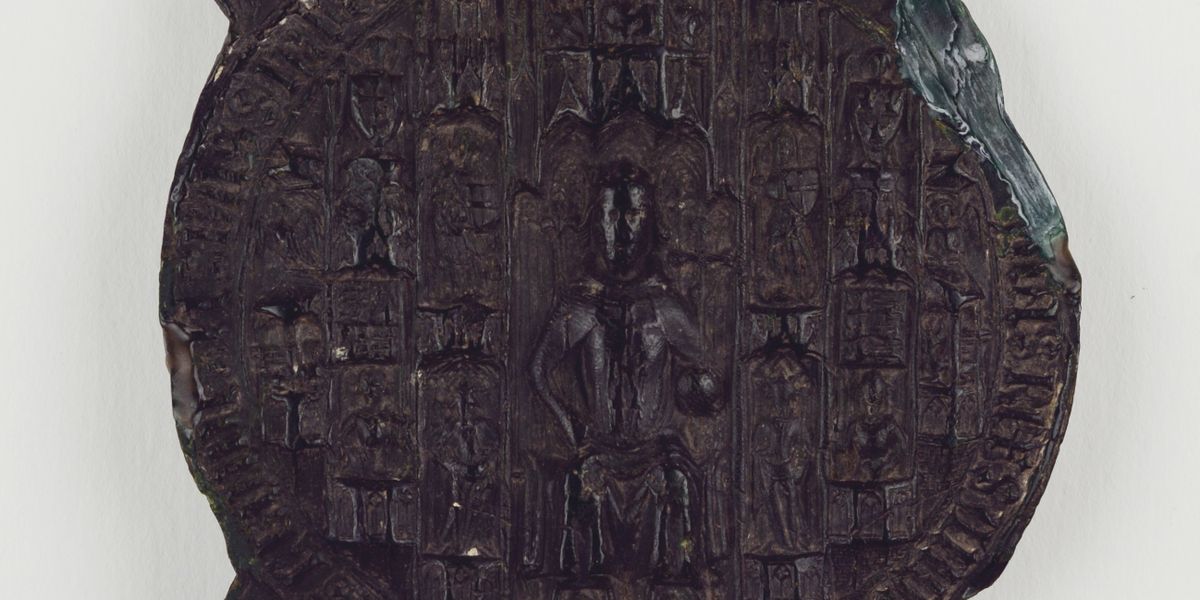 Last month’s ‘Picture This…’ explored the theme of seals, with the seal of Eleanor of Castile. This article will look in particular at medieval seals as symbols of power and authority, with this example of the Great Seal of Henry IV (from DCc/ChAnt/O/133 in the Cathedral Archives collection). The seal is attached to a charter dating from 1399 concerning a grant made to Canterbury Cathedral Priory for securing divine service for Joan, Lady Mohun, while she lived and for her soul after death. (For more on this, see Diane Heath’s November 2017 piece on Lady Joan’s tomb). The attached seal is an impressive specimen, and in its day would have granted the charter royal approval and tacitly provided a glimpse of some core values of Henry’s kingship.
The round double-sided seal depicts two principal facets of English sovereignty: justice and martial prowess. Such imagery was fitting for the Great Seal, as its purpose was to act as a political guarantee of authenticity on the most important records and documents emanating from the Royal government. On the front (obverse) side, King Henry IV is seated underneath an arch on a throne holding an orb surrounded by saints, with Christ above him, and men sitting within their heraldry, amplifying the King’s dispensation of righteous justice.
Henry IV’s seal also depicts key saints who had by this time become patrons of English monarchy, in this case St Edmund and St Edward the Confessor. This was likely an attempt to bolster Henry’s legitimacy as king, something which was questioned throughout his reign following his usurpation of the throne in 1399 from the tyrannical King Richard II.
The reverse of the seal shows the king mounted on a horse, holding a sword and shield prepared for battle. It was important for a king to embody warrior iconography because it was the king’s duty to lead his men into battle and protect the nation. Henry IV was successful in fighting against a rebellion at the Battle of Shrewsbury fought in 1403, led by Henry Hotspur Percy. Martial iconography of this sort had been a tradition since the time of William the Conqueror.
Medieval seals such as this were always made out of an amalgam of beeswax and resin, and colouring was added to distinguish the type of seal. For the Great Seal, it was typical for it to be coloured green. This seal measures an impressive 13cm x 13.4cm; it is now coloured grey, but there are remnants of the colours green and brown on the seal. Seals were often also red, or sometimes brown as the result of deterioration of the colours. This seal has seen particular damage over the years; alongside the discolouration, two of the lugs (remnants of the mould from the seal press) have also been damaged.
Given their brittle nature, not to mention their legal and symbolic importance, seals were often given protective wrappings to avoid risk of damage. At Canterbury Cathedral Priory, charter seals were enclosed in bags of antique oriental silk that was probably cut from discarded vestments. The Cathedral Archives cares for a significant collection of these rare medieval seal bags. Unfortunately, with this particular seal, there is no surviving evidence of this, but there is no doubt that a seal of this magnitude would have had some form of protection.
The method of producing this seal was an intricate method using a seal press. For a double-sided seal, the two matrices would be flattened, leaving room for the lugs. The warm wax would then be compressed together forming the distinct seal pattern. To attach the seal to the charter there was a cord through the seal, threaded through holes at the bottom of the parchment. On this particular seal, the cord is silk coloured red and green. By adding silk to a seal, it would make the seal more durable. From the 13th century onwards, cords were generally used for the most important documents, such as charters validated with the Great Seal.
This example of the Great Seal and its accompanying image of Henry IV, though perhaps simplistic on first glance, is a beautiful and complex image, an autographic signature carrying the weight of the royal prerogative and an elaborative decorative piece in its own right.