A New Year, a New Hope: The Creation of Life in Genesis 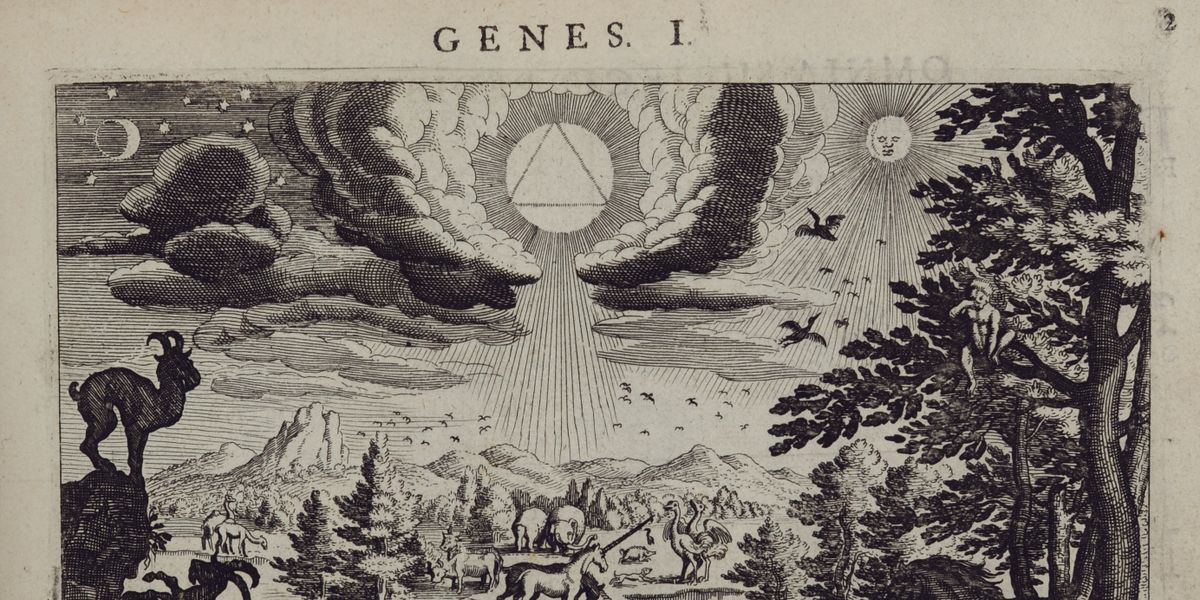 Welcome to the start of the 2019 edition of Picture This! This month’s picture depicts the story of Genesis I; the creation of new life and a new world links strongly with the hopes and aspirations that each New Year brings. It is a beautiful print and just when you think you have seen everything within it, some more detail captures your eye such as the frog under the stag or the snail in the bottom right hand of the corner.

The picture comes from the Icones Biblicae (1659); W2/X-4-22, an extremely popular picture bible publication in the seventeenth century that inspired several imitations but is now quite rare. The book is a picture bible published in landscape format, and was originally produced by Swiss engraver and printmaker Matthäus Merian the Elder (1593-1650). Merian published Icones Biblicae in 1627, and in the preface wrote that its purpose was not only to amuse and delight but to encourage the spirit.

At the time of its initial publication, the Thirty Years War (1618-1648) was ongoing, explaining why this work is not a complete edition of the Bible. Given the climate, it would be difficult for Merian to predict how marketable the Icones Biblicae would be in areas affected by the fighting.

Our picture is from a later unauthorised edition published in 1659 by the Dutch publisher and engraver Cornelis Danckertz the Elder (c. 1603-1656).

Danckertz had already published two earlier versions in 1648 using Dutch artists, with newly produced etchings by the engraver Pieter Holsten and added Dutch translations in verse and prose by the poet, Reiner Ansley. When you examine Danckertz’s version of the first chapter of Genesis, it is a mirror image of Merian’s work, which explains why his publication has been described as ‘the pious deception of Danckertz’.

Anslo’s text introduces the viewer to the essence of the performance within the picture, summarising the seven days of creation:

‘In the beginning God makes Heaven, and Earth,
To Sea, to Light, to Starres he gives a birth,
Fishes, Fowles, Beastes, and Wromes he doth create
All whith Gods pow’r and might intimate’.

Looking at the picture itself, the sky is divided into three, with night and day separated by a representation of God. The depiction of God as a triangle within a second sun links back to contemporary and earlier ontological arguments put forward by Anselm (1033-1109), Archbishop of Canterbury, and René Descartes (1596-1650) that ‘God has existence just as a triangle has three angles’.

Of the animals depicted there are so many it is not possible to cover them all here, but some have clear religious significances. Throughout history there have been many allegorical interpretations of the unicorn. Suhr said that ‘the most important [interpretation is] religious: [the unicorn] stands for the union of Christ with the Father’. Looking at the picture, this can be seen in the placement of the unicorns directly underneath the depiction of God in the sky.

In the lake, directly below the unicorns is what looks like a sea monster, but is a whale, reflecting Genesis 1:21, ‘God made great whales’. The lions in the bottom right hand corner represent strength and power, but within the Bible, God is described in a number of passages as having leonine qualities such as being fearless in protecting his own (Isaiah 31:4). Finally, there is a human figure almost obscured in the trees on the right hand side where he sits in the branches, presumably representing Adam patiently awaiting Eve.

Reflecting on the picture, we are reminded that God had a plan, and everything he created in that first week had a purpose. The ‘newness’ of the beginning depicted here reflects the ‘newness’ that typifies January and the prospect of the year ahead.