A Foreshadowing Through Glass: the Martyrdom of Archbishop Ælfheah 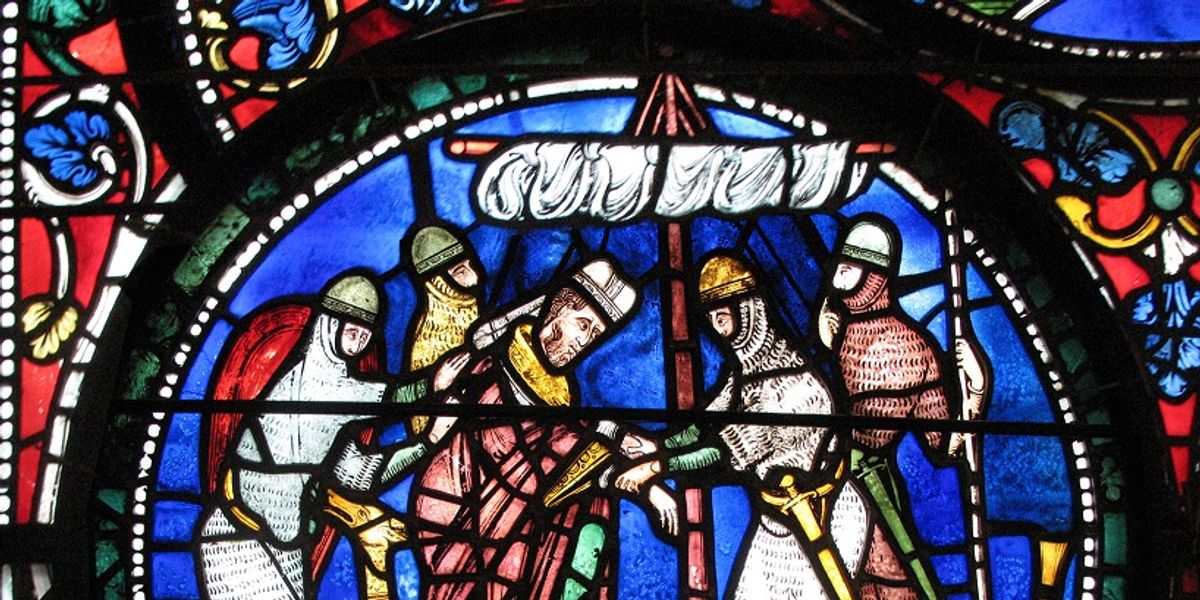 While Thomas Becket is undoubtedly Canterbury’s best-known martyred archbishop, he was not the first. In 1011, a Viking army led by Thorkell the Tall stormed Canterbury and captured Archbishop Ælfheah (or Alphege) along with many others. Ælfheah was then held captive for several months until his violent death within the Viking camp at Greenwich on 19th April 1012. A few short years after his death, an anonymous chronicler, writing in Old English, recorded his death like so:

‘Then on the Saturday the army became greatly incensed against the bishop because he would not promise them any money, but forbade that anything should be paid for him. They were also very drunk, for wine from the south had been brought there. They seized the bishop, and brought him to their assembly on the eve of the Sunday of the octave of Easter, which was 19 April, and shamefully put him to death there: they pelted him with bones and with ox-heads, and one of them struck him on the head with the back of an axe, that he sank down with the blow, and his holy blood fell on the ground, and so he sent his holy soul to God’s kingdom.’

This same chronicler proclaimed Ælfheah to be a martyr and, indeed, it is clear that the archbishop was quickly revered as such. Initially buried at St Paul’s Cathedral in London, his body was translated to Christ Church, Canterbury in 1023 in a procession that was attended at various points by King Cnut and Queen Emma as well as many leading nobles and members of the church. Evidence of his veneration throughout England can be seen in his inclusion in eleventh- and twelfth-century liturgical calendars.

We do not have evidence to suggest that the veneration of Ælfheah ever inspired mass pilgrimage, yet it is clear that the memory of this martyred archbishop remained strong up to the time of Becket and beyond, particularly within the community of Christ Church, Canterbury. In the late eleventh century the Canterbury monk Osbern composed a Latin hymn in Ælfheah’s honour as well as Latin texts recounting Ælfheah’s life and the translation of his body to Canterbury. Writing a hundred years later, Gervase of Canterbury noted that during the rebuilding of the cathedral quire that took place in the earlier twelfth century, Ælfheah’s body was placed immediately next to the high altar, while a beam stretching over the new high altar depicted Ælfheah and the earlier Archbishop Dunstan flanking Christ.

Despite the martyrdom of Becket in 1170 and the fire that destroyed much of the cathedral roof and eastern interior in 1174, Ælfheah persisted in the consciousness of the Christ Church community – and this is no more apparent than in a set of three late twelfth-century stained glass panels that survive today in the cathedral. Now located immediately to the north of the quire in window Nt. IX, but thought to have originally been part of a cycle of perhaps as many as fifteen panels that looked down on the altar dedicated to Ælfheah in the presbytery, these windows were created around the year 1180. They therefore date to an extraordinarily fervent period of activity at the cathedral, when the cult of Becket was beginning to thrive and much of the eastern end of the cathedral was being rebuilt.

As to the panels themselves, they depict three moments in the narrative of Ælfheah’s martyrdom, two of which are easily identifiable. In the top panel, we see the city of Canterbury under siege from Thorkell’s army. Symmetry dominates this scene: in the foreground, four soldiers, not obviously ‘Vikings’ to the modern eye, stand outside the city walls, two either side of a magnificently decorated red door that remains firmly closed; four soldiers within the walls attempt to fight back, thrusting spears and throwing stones down on the attackers. The lower left-hand window moves the narrative on to the conclusion of the siege, namely the capture of Ælfheah. Here we see Ælfheah in a long red garment, lowering his mitre-topped head in submission as he is guided by four soldiers onto a boat. The boat is adorned at its front with an animal figurehead, while its overall shape is not dissimilar to the images of boats found in the Bayeux Tapestry (produced approximately a hundred years earlier, possibly at Canterbury).

Much of the glass in the first two windows is original. The third panel, however, has been subject to considerable restoration and, perhaps as a result, the scene it depicts has been a focus of debate. What we see here is Ælfheah seated to the left, again lowering his mitre-topped head. At his feet lies a seemingly decapitated body, while above, another individual is on his knees facing a figure in green and red clothing, who in turn stands in the entrance to a stone building. Behind them, three soldiers appear to loom, wielding an axe and two swords; it is not entirely clear whether the weapons are going to strike Ælfheah or the man knelt in front of him. Where in the narrative are we? Understandably, some commentators believe this to be Ælfheah’s moment of martyrdom. However, given the presence of the stone structure and given that Ælfheah is seated and appears to be witnessing the violence, it seems more likely that this is the massacre of Canterbury’s residents. Ælfheah here is perhaps, as reported by Osbern, begging the attackers to cease their violence; the figure in red and green could possibly be the treacherous archdeacon Ælfmær, who let the Viking forces into the city.

We are left to speculate about which other moments of Ælfheah’s life and martyrdom the designers of these windows chose to commemorate in the now-lost panels of the window scheme. It is nevertheless worth considering why exactly so much energy was poured into visualising this earlier archbishop and, moreover, how these panels would have resonated at a time in the late twelfth century when most attention in the rebuilding and redesigning of the cathedral was concerned with the far more recent martyrdom of Becket. This has been a topic of discussion by several scholars, who have varyingly pointed to the parallels between the martyrdoms of Ælfheah and Becket – two archbishops who sacrificed themselves for their communities and who died at the hands of secular violence. This was certainly not lost on the designers of Canterbury’s late twelfth-century windows, who, as Marie-Pierre Gelin has recently discussed, sought to create visual analogues between the two archbishops and their martyrdoms through shared physical attributes and colour schemes. One might note here, for example, that it is four soldiers depicted attacking the walls of Canterbury, and it is four soldiers leading Ælfheah onto the boat; famously, it was also four knights who murdered Becket in the cathedral. Several sources also suggest a deep personal veneration on the part of Becket for Ælfheah: several days before his own death, Becket invoked Ælfheah’s name in a sermon delivered in the cathedral, while some sources even claim that Becket spoke Ælfheah’s name at the very moment of his martyrdom. Recent work by Christopher de Hamel also raises the exciting possibility that one of Becket’s most prized possessions was a psalter that survives to this day (Cambridge, Corpus Christi College MS 411) – a book that was perhaps commissioned in the early eleventh century by Ælfheah. For Becket, Ælfheah would have represented a role model: a leader dedicated to the care of his community, at times in the face of political and secular violence. For Becket’s mourners, Ælfheah was not only an emblem of the long-standing integrity of their archbishops; he was also an earlier echo of the sanctity of Becket: a foreshadowing that underscored the divinely willed nature of Becket’s fate.

Christopher de Hamel, The Book in the Cathedral: The Last Relic of Thomas Becket (London, 2020)